Intensive Care Med (2004) 30:444–449DOI 10.1007/s00134-003-2117-0 Olanzapine vs haloperidol: treating delirium UniversitØ de MontrØal),Montreal, Quebec, Canada ments: Patient’s delirium severity andbenzodiazepine use were monitored Division of Respiratory and Critical Care, McGill University Health Centre,Montreal, Quebec, Canada Published recommendations for delirium treatment in the ICU are empiric. Antipsychotic administration is Delirium in the intensive care unit (ICU) setting has broadly accepted, especially for agitated delirium [11].
generated interest recently. Its occurrence is associated The use of antipsychotics is based on the belief that such with adverse outcomes: self-extubation, removal of intervention will shorten symptom severity and duration indwelling catheters [1], prolonged ventilator dependence [12]. Haloperidol is the medication most commonly used [2], and lengthened ICU and hospital stay [3, 4, 5].
in critical care practice. Intravenous administration pre- Delirium is not associated with increased ICU mortality sumes that this route is more effective in emergency [1, 2] but seems an independent marker for increased 1- situations, with less extrapyramidal side effects [13]. This year mortality [6]. Recognizing delirium remains chal- approach, with rapid dose escalation, is specifically lenging [7, 8]. Recent tools have been developed to screen recommended in textbooks [14] and recently published for [9] and aid in identification of [10] delirium in the ICU. Clinical management and pharmacologic treatment Despite its broad acceptance in clinical practice, haloperidol is not without adverse effects. Cognitive “numbness” and dysphoria are well recognized and occur as agreement from the attending physician were obtained prior to in 40% of studied subjects [16]. Extrapyramidal side effects, such as akathisia and oropharyngeal dysfunction,have been described [16, 17]. Neuroleptic malignant syndrome and dystonic reactions, including laryngospasmand trismus, are also reported [18, 19].
After randomization on an even/odd day basis for haloperidol or Haloperidol causes ventricular arrhythmias, torsades olanzapine, the intensivist prescribed the antipsychotic orally or viaenteral tube within 2 h of the diagnosis of delirium. Haloperidol de pointe, and cardiac arrest, especially in patients with was initiated at 2.5–5 mg every 8 h, and olanzapine was begun at cardiac disease both with and without preceding QT 5 mg daily. Patients over 60 years received a lower initial dosage interval prolongation [20]. QT prolongation has been (haloperidol 0.5–1 mg, or olanzapine 2.5 mg). Subsequent titration reported with low-dose haloperidol. Finally, some pa- was based on clinical judgment. All administered doses ofmedication were recorded. We noted the use of benzodiazepines tients may be resistant to haloperidol. All patients thus as adjuvant treatment. Clinicians and nurses titrated sedative require ongoing assessment of its therapeutic effect [21].
dosage with the Ramsay scale. Intravenous haloperidol adminis- The severity of comorbid conditions commonly ob- tration was left to the treating intensivist’s discretion.
served in the ICU raises concerns about haloperidol’spotential adverse effects. In some patients haloperidol is clearly contraindicated. An alternative medication whichoffers symptomatic control of delirium with less frequent Demographic information, type of admission, and Acute Physiol- and less severe adverse effects would be clinically useful ogy and Chronic Health Evaluation (APACHE II) scores were in the delirious ICU patient. New second-generation collected when delirium was diagnosed. Objective evaluations wereperformed on a daily basis by a clinician or research nurse blinded antipsychotics with more favorable pharmacologic pro- to the dispensed medication. The measures obtained at baseline and files have been introduced for the treatment of schizo- daily up to a maximum of 5 days in the ICU were: phrenia. Their potential benefit in delirium treatment hasrecently been explored [22, 23, 24, 25, 26]; one of these, 1. Vital signs.
2. Liver function tests.
olanzapine, has a reported oral bioavailability of 80% and 3. Daily dose of antipsychotic study medication.
Because of early encouraging reports [22, 23, 24, 25, 5. Daily dose of sedatives if used specifically for sedation.
26], we conducted a prospective randomized controlled Benzodiazepines doses were converted to lorazepam equiva-lents [29].
trial to evaluate the safety and clinical utility of one such 6. Daily dose of antiparkinsonian medication prescribed for agent, olanzapine, as an alternative to haloperidol for treatment of delirium in the intensive care setting.
7. Delirium index (DI), as previously described [30], administered by one of three individuals (two research nurses, one physician)trained its use. This delirium severity scale is based on sevenitems associated with delirium, each rated on a four-point scale for a maximum score of 21. The evaluator was blinded to thepatient’s treatment.
8. Daily worst Ramsay score [31] obtained at least once every 8-h From July 2000 to September 2001, patients aged 18–75 years 9. Extrapyramidal signs assessed with Ross-Chouinard [32] and admitted to a 16-bed medical-surgical ICU (Maisonneuve-Rose- Angus-Simpson scales [33] by a physician.
mont Hospital, Montreal,) for more than 24 h were screened threetimes daily for delirium utilizing the ICU Delirium ScreeningChecklist, ICU-DSC, as previously described [9]. In screened patients with an ICU DSC of !4 or with clinical manifestationsdelirium, the diagnosis was confirmed by a physician using DSM- Comparisons of medical and demographic characteristics were IV criteria [28]. All patients with delirium were considered eligible performed with Fisher’s exact test and Student’s t test. Analysis of variance for repeated measures was used for group comparisons on Pregnant patients, those who received antipsychotic medication the DI severity scores, and total daily benzodiazepine dose, based within 10 days prior to hospital or ICU admission, or in whom on a 25 mixed model, (i.e., two groups measured at five time either haloperidol or olanzapine was contraindicated were exclud- points). When indicated, Greenhouse-Geisser correction was ed. Contraindications to drug administration were Parkinson’s applied to adjust for unstable between-measures correlation. All disease, oropharyngeal dysfunction, prolonged QT interval, and simple main effects were calculated, in order to assess group differences at each time point and study patterns of change within Individuals with gastrointestinal dysfunction, precluding oral/ each of the two groups. Sidaks multiple comparisons procedure was enteral drug administration, or whose neurological status did not used for post-hoc time-point comparisons.
permit an adequate neuropsychiatric evaluation (e.g., stupor or Inter-rater reliability was evaluated with the intra-class corre- coma), were also excluded from the study. Patients who developed lation coefficient, using a two-way random-effects model. Since agitation during the study were permitted intravenous haloperidol delirium is a fluctuating disorder, intra-rater reliability was not administration (recorded as “rescue haloperidol”).
The research protocol was approved by the institutional scientific and ethics committee. Written informed consent as well 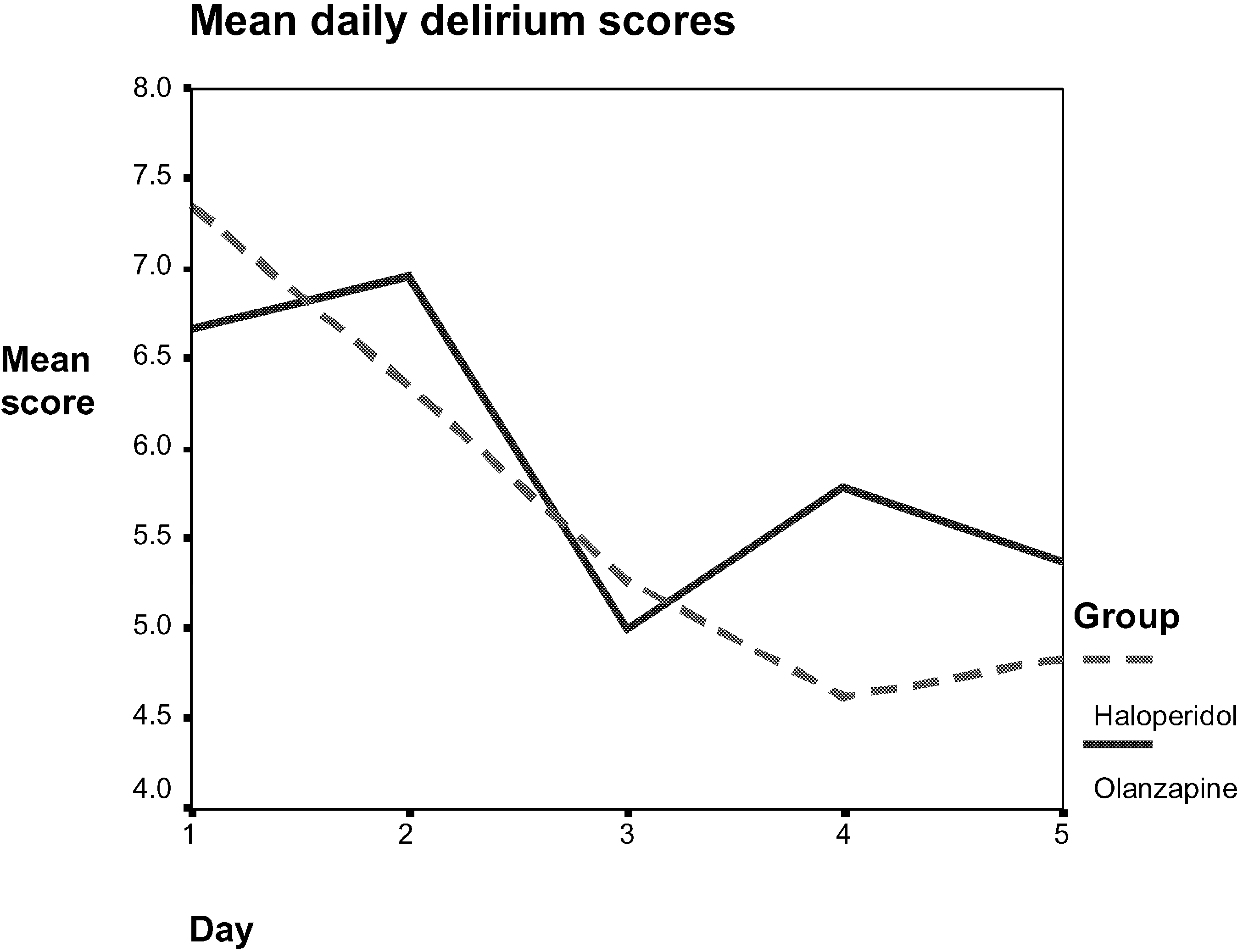 Of 1009 patients admitted to the ICU during the studyperiod, 214 patients were diagnosed with delirium. Ofthose, 103 were considered eligible for the study (exclu-sions were due primarily to gastrointestinal dysfunction).
Informed consent was obtained in 80 patients; of these,the treating physician withdrew 3 patients, status changedto “no active treatment” in 2, drug interaction wassuspected in 1, and data was lost in 1 patient. Seventy-three patients were included in the final analysis. Sixty-one patients remained alive and in the hospital for 3 daysor more, accounting for the difference between therandomized and 3-day analysis. Patient characteristicsare shown in Table 1. Gender distribution (p=0.43) andAPACHE II scores (p=0.14) were comparable, as werepatient weights (p=0.9). The study population waspredominantly surgical. The difference between the Fig. 1 Delirium index scores were performed daily and are shown urgent/elective surgical patient ratio did not reach statis- over time. Overall delirium indices decreased over time (7.08 for tical significance (p=0.057). The mean age of patients all patients on day 1 decreasing to 5.05 on day 5). There are no receiving haloperidol (63.26€11.66 years) was lower than the age of the group receiving olanzapine (67.50€6.04 years, p=0.046). Other clinical characteristics relatedto reasons for ICU admission, as well as co-morbidities, were no different between the groups.
Patients in the haloperidol group received were given a Figure 2 depicts the benzodiazepine dose requirements mean enteral daily dose of 6.5 mg of drug (range 1– over time, expressed in lorazepam equivalents [29]. The 28 mg) compared with 4.54 mg for the olanzapine group square root of benzodiazepine doses was used to correct (range 2.5–13.5 mg). Rescue intravenous haloperidol was for non-normal distributions as well as the withdrawal of used primarily on the first day (10 of 28 in the olanzapine one subject (no. 64) from the analysis because benzodi- group, range 1–5 mg, 2.32€1.32 mg; vs 19 of 45 in the azepine values on days 4 and 5 were atypical (24 and haloperidol group, range 1–5 mg, 2.92€1.56 mg). From 26 mg, respectively). Analysis of variance did not identify day 2 onwards, 5 patients received rescue haloperidol in any differences between the two groups, at any of the five doses ranging from 1 to 3 mg. Only one olanzapine measurement times (interaction effect p=0.94, group patient required one rescue haloperidol dose on day 3.
effect p=0.9). There was, however, a time effect The proportion of patients requiring intravenous haloper- (p=0.02) reflecting the decrease in dosages required over idol (p=0.63) and the amount of IV haloperidol required in each group (Z=0.97, p=0.35) were similar.
The dose of rescue haloperidol, opiates, sedatives other The results of the daily DI scores are summarized in than benzodiazepines, Ramsay scores, vital signs, and Fig. 1. A comparable reduction in DI was noted over time liver function tests were no different between groups.
in both groups, with no difference between patients Most patients received continuous infusions of fentanyl, treated with haloperidol vs olanzapine (ANOVA time the preferred opiate analgesic in our ICU, in doses effect p=0.02, group effect p=0.83, interaction effect ranging from 50 to 100 mg/h. Propofol was not used.
p=0.64). Inclusion of patients present for only 3 or 4 days Ramsay scores ranged from 1 to 3 in both groups with the did not modify the results. Overall agreement between exception of the first 24 h, during which approximately a admission, and acute physiolo-gy and chronic health evalua- 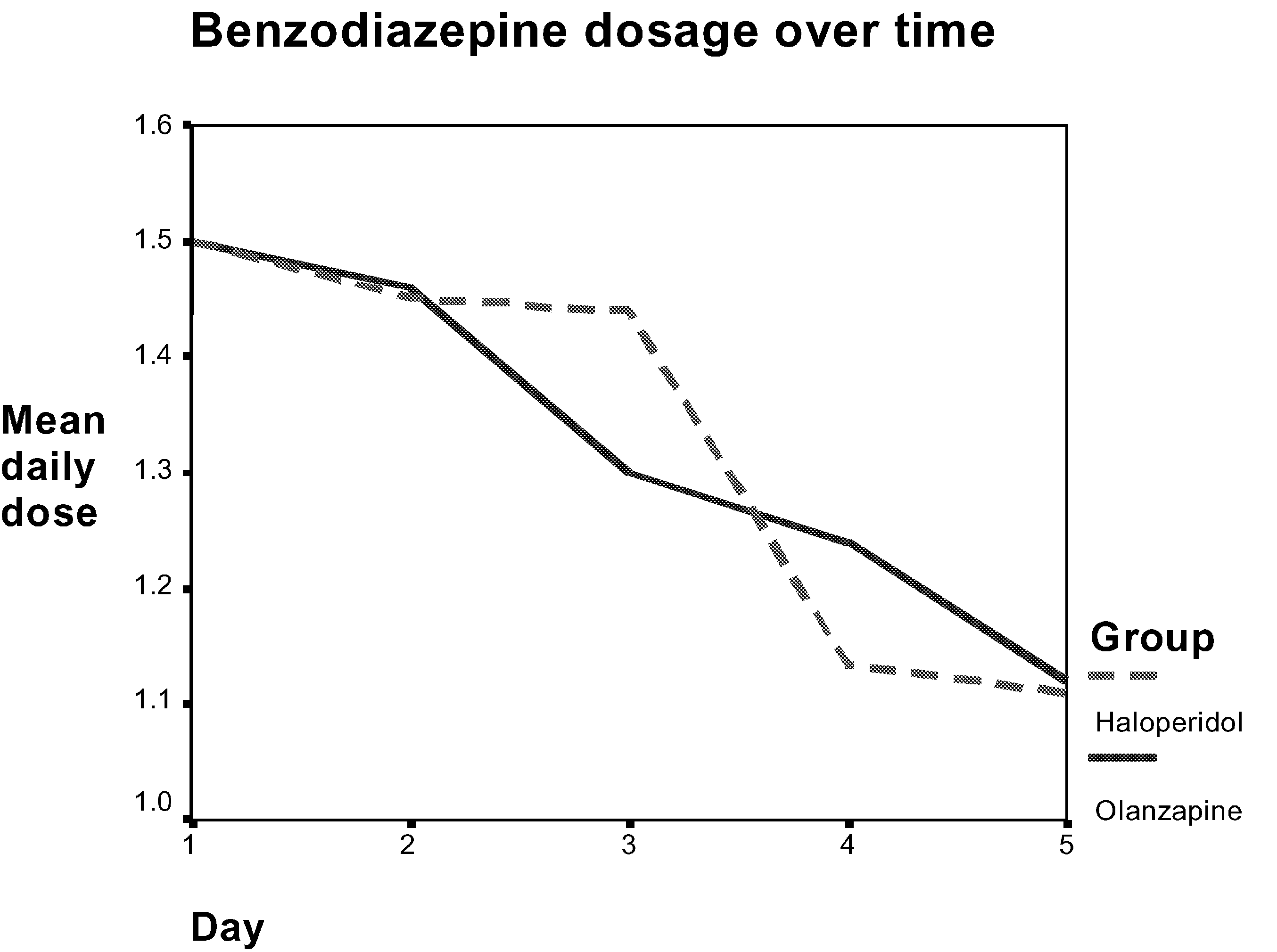