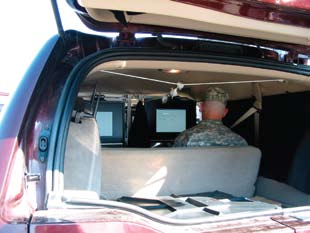 INFORMATION TECHNOLOGY AND COMMUNICATIONS Mitigating Motion Sickness in Ground Vehicles
J.T. Coyne,1 R. Stripling,1 E. Rovira,2 D. Hunter,3 J.V. Cohn,1 K. Brendley,3 G. Zwick,2 and G. Carter2 Introduction: Motion sickness (MS) represents
a challenge to many warfighters, particularly those in command and control vehicles (C2V). Research by the U.S. Army and NASA1 suggests that as many as 90% of operators in a C2V experience some performance decrements and MS symptoms. Common solutions to MS emphasize pharmacological interventions, such as promethazine and dimenhydrinate (Dramamine™). The challenge with these approaches is that they often lead to decrements in cognitive performance and drowsiness. The sensory conflict theory suggests that (USMA), West Point, NY, with 21 first-year cadets MS arises in conditions where the sensory systems, participating in the study. Each participant took part specifically the visual and vestibular systems, detect in training and two driving sessions. The first driving different motions. This paper provides evidence for an session could be held on the same day as the training, information technology solution to MS, called Motion but the final driving session had to be held on a sub- Coupled Visual Environment (MOCOVE),2 which sequent day. The two driving sessions were identical attempts to resolve MS by artificially introducing cou- except that half the participants had MOCOVE on the plings between visual and vestibular motion cues. first day and the other half had the uncoupled system The MOCOVE device contains a set of accelerom- eters that detect physical motion and uses software to Participants received approximately 1 hour of provide an Earth-referenced, stabilized viewing scene. training on a cognitive-motor battery and a simpli- For example, when MOCOVE accelerometers detect fied C2V task prior to entering the vehicle. Data were a roll movement of the vehicle, MOCOVE software collected from the participants before the vehicle began rotates the computer display window in the opposite moving, twice during each drive, and immediately after direction, at a rate proportional to the rate of physical the completion of each drive (Fig. 2).
rotation of the vehicle. Similarly, if MOCOVE accel- The data indicated a significant difference decrease erometers detect an upward movement of the vehicle in participants’ ratings of MS on the first day compared (usually called heave), then MOCOVE software acts to to the second day. While there was no overall difference move the display window downward proportionally.
between MOCOVE and the uncoupled system, further Previous research demonstrated the potential for analysis found that the difference between the two using MOCOVE to reduce MS in a ship motion simu- systems was significant on the first day.
lator (SMS). Participants viewed motions with and without MOCOVE as the SMS provided pitch and roll Summary: The study provided some evidence
motions. Due to technical issues with the sensors, all of the effectiveness of MOCOVE in reducing motion participants on day one did not have MOCOVE, while sickness symptoms. More importantly, the current on day two they had MOCOVE. Initial results, which results appeared to be influenced by the more power- used the motion sickness assessment questionnaire ful effect of previous exposure (i.e., on the previous (MSAQ) scores collected at 5-minute intervals during day). This pattern of results was unexpected because the study, suggested a reduction in MS symptoms on adaptation to MS at sea typically requires hours or day two supporting MOCOVE. However, it is not clear days of continuous, prolonged exposure. The present if this difference was potentially due to adaptation to study provides some initial data for adaptation to MS the environment. The current study was designed to in ground vehicles with uncoupled motions; however, determine (a) how effective MOCOVE is in a moving future research needs to examine this issue further.
ground vehicle (see Fig. 1) and (b) the extent to which The MOCOVE effect may have been weaker than repeated exposure will affect MS and performance. expected because the system used in the current experi-ment was a modified version of the system designed Methodology and Results: The experiment was
for ship motions, which are characterized by move- conducted at the United States Military Academy ment along the rotational axis (i.e., pitch and roll) and INFORMATION TECHNOLOGY AND COMMUNICATIONS not lateral movement (i.e., accelerating and braking). There is some indication in the literature that it is these motions (braking/acceleration) that contribute most to motion sickness in land vehicles, and it is possible that the MOCOVE system being used could not adequately compensate for them. Design of a new ground vehicle–specific version of MOCOVE is already under way. This new design will feature a static window where the operators will perform their tasks while the background of the display will feature a moving terrain depiction based upon the vehicle’s motion. It is hypoth-esized that this display may have a more pronounced reduction of MS.
References
1 P.S. Cowings, W.B. Toscano, C. DeRoshia, and R. Tauso, “Effects of Command and Control Vehicle (C2V) Operational
Environment on Soldier Health and Performance,” J. Human
Performance in Extreme Environments 5(2), 66-91, 2001.
2 K.W. Brendly, J.V. Cohn, J. Marti, and P. DiZio, “Demonstration of a Motion Coupled Virtual Environment (MOCOVE) - A Device for Reducing Spatial Disorientation in Uncoupled Virtual and Motion Environments,” Proceedings of the Human Factors and Ergonomics Society 46th Annual Meeting, 2002, pp. 766-70.

UnitedHealthcare Pharmacy - July 1 PDL Report Fully Insured Customers on the Traditional PDLThe July 1, 2011 Prescription Drug List (PDL) and pharmacy benefit updates represent a small percentage of all prescriptions – no medications in the top 100 – but create significant value for our customers. These decisions are designed to drive the greatest total health care value, while preserving a