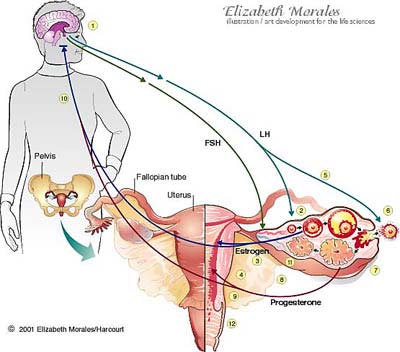 UNIT 5. THE ENDOCRINE SYSTEM AND REPRODUCTION The menstrual cycle is the monthly cycle of changes that occurs in the female reproductive system. An egg develops in an ovary and the uterus prepares for the The Menstrual Cycle
arrival of fertilized egg or zygote.
Hormone Control:
Hypothalamus produces gonadotrophin-releasing hormone (GnRH), necessary
for release of FSH (follicle-stimulating hormone) from the pituitary gland. FSH
causes small follicles (ovaries store thousands, they are inmature eggs) to develop
inside the ovary. One follicle begins to grow larger and secretes estrogens. This
follicle produces a cell that will become an egg /ovum. Estrogens produced by cells
around the egg (follicle developing) causes the lining of the uterus (endometrium) to
grow and prepares it to receive the fertilized egg. Estrogens are also responsible for
physical characteristics of woman. The rising levels of estrogens in blood signal the
pituitary gland the ovary is ready to release the egg. Pituitary gland releases LH
(luteinising hormone), that signal the ovary to release the egg (ovulation). After
ovulation, the corpus luteum (cluster of cells that formed the follicle and remain in
the ovary) starts to produce progesterone. The egg released can be fertilized for the
nex few days if sperm is present in the Fallopian tubes.
9 If the egg is fertilized corpus luteum keeps producing progesterone, needed to keep the egg implanted and growing, endometrium continue growing and preparingto receive the zygote. It also blocks the release of more LH and FSH from the pituitary gland, preventing the development of new follicles, so further ovulation doesn’t occur.
9 If the egg is not fertilized, corpus luteum stops producing hormones and degenerates and is reabsorbed in the ovary. Levels of progesterone and estrogens fall in blood and the lining of the uterus (endometrium) starts to break up. Unfertilized egg and endometrium pass out of the body through the vagina. Menstruation lasts about 4-6 days. The cycle starts over again.
Menstrual cycle occur in women until the age of approximately 50, when
menstruation becomes very irregular and finally disappears. This period is known as
the menopause or climatery. 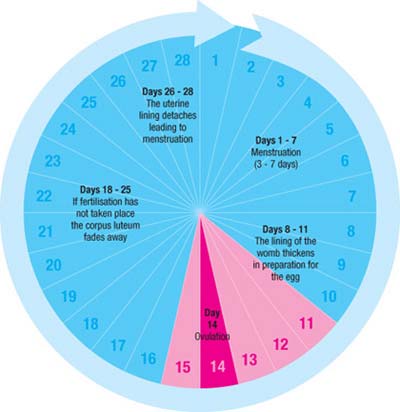 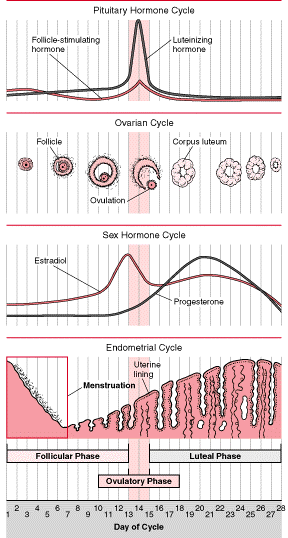 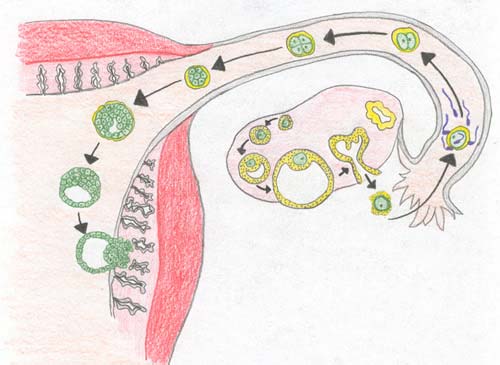 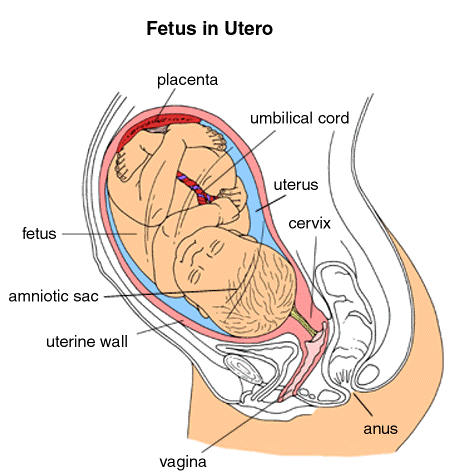 Pregnancy
9 Zygote: after fertilization zygote moves down the Fallopian tubes/oviducts toward
the uterus. During this trip, the zygote begins to divide many times forming a hollow
ball of hundred of cells. Zygote divided attaches to the lining of the uterus
(endometrium). This process is known as implantation. For the next eight weeks or
so, the developing human is called embryo.
9 Development of embryo: The hollow ball grows and new membranes are formed.
The amniotic sac is a membrane that surrounds the embryo and develops into a fluid-
filled sac, that cushions and protects the developing baby. The placenta is the link
between the embryo and the mother. In the placenta, the embryo’s blood vessels are
located next to the mother’s blood vessels. Blood from the two systems does not mix,
but many substances are exchanged. The embryo receives nutrients, oxygen, and
other substances from the mother. It gives off carbon dioxide and other wastes. The
embryo soon moves a short distance from the placenta. A roplike structure called the
umbilical cord forms between the embryo and the placenta. It contains blood vessels
that link the embryo to the mother, but the two circulatory systems remain separated
by a thin barrier. This barrier prevents some diseases from spreading from the mother
to the embryo. However, substances such as chemicals in tobacco smoke, alcohol,
and some other drugs can pass through the barrier to the embryo.
9 Development of the fetus: From the ninth week of development until birt, the
embryo is called fetus. Many internal organs have developed. The head is about half
the body’s total size. The fetus’s brain is developing rapidly. By the end of the third
month, the fetus is about 9 centimeters long and has a mass of about 26 grams.
Between the fourth and six months, the tissues of the fetus continue to develop into
more recognizable shapes. Bones become distinct. A heartbeat can be heard with a
stethoscope. A layer of soft hair grows over the skin. The arms and legs develop more
completely. At the end of the sixth month, the mass of the fetus is approaching 700
grams. Its body is about 20 centimeters long. The final 3 months prepare the fetus to
survive outside the mother’s body. The brain surface develops grooves nad ridges.
The lungs become developed enough to carry out the exchange of oxygen and carbon
dioxide. The fetus doubles in length. It mass many reach 3 Kilograms or more. 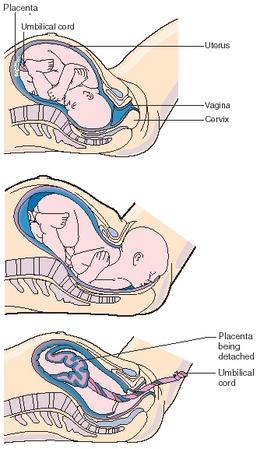 After about 9 months of development inside the uterus, the baby is ready to be born. The birth of a baby takes place in three stages: 9 Labor: during the first stage of birth, strong muscular contractions of the uterus
begins. These contractions are called labor and cause the cervix to enlarge, eventually
allowing the baby to fit through the opening. As labor progresses, the contractions
become stronger and more frequent. Labor may last from about 2 hours to more than
20 hours.
9 Delivery: it is the second stage of birth. During this phase the baby is pushed
completely out of the uterus, through the vagina, and out of the mother’s body. At this
time, the baby is still connected to the placenta by the umbilical cord. Delivery usually
takes less time than labor does (from several minutes to a few hours). Shortly after
delivery, the umbilical cord is clamped, then cut about five centimeters from the baby’s
abdomen. Within 7 to 10 days, the remainder of the umbilical cord dries up and falls
off, leaving a scar called the navel, or belly button.
9Afterbirth: about 15 minutes after delivery, the third stage of the birth process
begins. Contractions push the placenta and other membranes out of the uterus
through the vagina. This stage, called afterbirth, is usually completed in less than an
hour.
Birth and the baby: the birth process is stressful for both the baby and the mother.
The baby is pushed and squeezed as it travels out of the mother’s body. Contractions
put pressure on the placenta and umbilical cord, briefly cutting off the baby’s supply of
oxygen. In response to the changes, the baby’s endocrine system releases adrenaline.
The baby’s heart rate increases. Within a few seconds of delivery, a baby may cry or
cough. This action helps rid the lungs of fluid and fills them with air. The newborn’s
heart rate then slows to a steady pace. Blood travels to the lungs and picks up oxygen
from the air that the baby breathes in.