Green flag are you ready?

Direct Line and Brake Reports on Safe Driving 2012-2014 REPORT TWO
Section 4
Fit to drive
TIREDNESS AND LONG JOURNEYS
THE FACTS: DRIVER TIREDNESS
Q1: On average, how often do you take a rest break from
Driver tiredness causes one in five deaths on major UK roads.1
driving when on long journeys?
Crashes caused by drivers falling asleep at the wheel typically More than half of drivers (55%) are ignoring basic advice to take
involve vehicles running off the road or into the back of another rest breaks at least every two hours on long journeys, while one in
vehicle. They tend to be high-speed crashes, because drivers do ten (9%) don't stop at all unless they absolutely have to.
not brake before crashing, so the risk of death or serious injury
occurring is greater than in other types of crashes.2
Among all drivers:
Too little sleep radically affects your ability to drive safely and after five hours’ sleep you only have a one in ten chance of staying fully awake on a lengthy journey.3
Research shows that normal sleep does not occur without warning. You should know when you are starting to feel sleepy.3
• 9% said they don’t usually take breaks unless they absolutely Warning signs include: increased difficulty concentrating; yawning; heavy eyelids; eyes starting to ‘roll’; and neck musclesrelaxing, making the head droop. Figure 1: How often do you take a rest break from driving on long journeys?
Q3: What do you do if you do feel sleepy when driving on
long journeys?
41%
A horrifying one in three drivers (35%) admit sometimes pushing
33%
on if they feel sleepy at the wheel, ignoring advice to stop as soon
as possible, with 10% saying this is their usual approach.
Among all drivers:
12%
9%
• 66% always stop as soon as possible at the next safe place and 4%
1%
At least every At least every
At least every
At least every At least every
Don’t
• 25% often stop, but sometimes try to push through the tiredness hour
two hours
three hours
four hours
five hours
usually take
breaks unless
by opening a window, switching on the radio or some other they absolutely
have to
Q2: What is the longest you have driven without
• 8% occasionally stop, but mostly try to push through the tiredness taking a rest break?
by opening a window, switching on the radio or some other method A huge proportion of drivers admit to dangerously lengthy stints
at the wheel without breaks. Almost four in 10 (39%) say they have
• 2% always push on and keep themselves awake by opening driven for four hours or more non-stop. Men are far more likely to
a window, switching on the radio or some other method have done this than women, and nearly five times as likely to have
driven for six hours or more non-stop.
LOST LIVES
Among all drivers:
Mark, 32, from Norfolk, was just ten minutes away from
home in April 2008, travelling back after visiting friends in Hertfordshire. The driver behind Mark watched him drive steadily for around a mile and then saw his car drift across the road.
As Mark swerved to return to the correct side of the road he drove into a 40 tonne vehicle driving in the opposite direction.
Barry Love, step father of Mark, said: "I have driven a lot for workso was aware of the effect that tiredness can have when driving, Men vs women:
but Mark's death really brought this home. It is awful to think • 1% of men and 9% of women said one hour or less that something so easily avoidable took Mark away from us, and • 12% of men and 30% of women said two hours caused such pain and devastation to our family. The issue of • 36% of men and 31% of women said three hours driver fatigue needs far more public awareness, as tiredness cancome on very quickly. If you notice any signs of tiredness before • 25% of men and 21% of women said four hours setting off, please rethink whether the journey is essential, or if • 11% of men and 7% of women said five hours you're already driving, take a rest as soon as you possibly can." • 14% of men and 3% of women said six hours or more 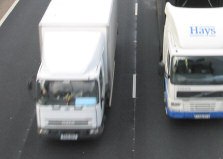 Direct Line and Brake Reports on Safe Driving 2012-2014 REPORT TWO
Section 4
Fit to drive
Q4: Do you always get at least seven hours’ sleep before a
long driving journey?
The majority of drivers (55%) admit not always getting a full seven
hours’ sleep the night before a long journey, leaving themselves at
risk of falling asleep.
Among all drivers:
ADVICE FOR DRIVERS: TIREDNESS
Get plenty of sleep before a journey, plan your journey toinclude time for adequate rest and don't set out if you arealready tired. Take rest breaks at least every two hours for aminimum of 15 minutes.
If you feel tired when driving, listen to the warning signs straight
away and stop for a break somewhere safe as soon as you can.
Sleep ensues faster than you think – trying to fight off sleep by
opening the window or listening to the radio puts you at risk of
'microsleeps', when you nod off for two to 30 seconds without
remembering it. Microsleeps can be fatal: at 70mph a driver
travels 200m in six seconds. However, fatigue can affect your
ability to drive safely long before microsleeps occur.5
If you start to feel sleepy while driving stop for at least a 15minute break somewhere safe. If you drink caffeine, drink twocups of coffee or preferably a high-caffeine energy drink, thentake a 10-15 minute snooze. By the time you wake up any caffeine will have kicked in and you may feel alert enough tocontinue your journey. If you still feel tired, or you still have along way to go, you should stay put and try to find somewhere to get a good night's sleep. Caffeine is a temporary drug and itseffects do not last long. Sleep is the only long-term cure to tiredness.
End notes
1. Department for Transport
2. Department for Transport
3. Awareness of sleepiness when driving’, University of Loughborough, 2003
4. Awareness of sleepiness when driving’, University of Loughborough, 2003
5. Fatigue and Road Safety: A Critical Analysis of Recent Evidence, Department
for Transport, 2011

NCAA Banned-Drug Classes 2006-2007 The NCAA list of banned-drug classes is subject to change by other anabolic agents the NCAA Executive Committee. Contact NCAA education services or www.ncaa.org/health-safety for the current list. The term “related compounds” comprises substances that are included in the class by (c) Substances Banned for Specific Sports: their pharmacol

Smithers Summary Shandi Hopkins was admitted to the residential treatment program, Smithers Alcoholism and Rehabilitation Center, at Roosevelt Hospital on 4/18/01 and discharged 5/27/01. He was in touch with me regularly, sometimes twice a day while in the program. I obtained an 800 number to enable him to stay in touch with me when I moved from New York last July to begin teaching at Illinoi