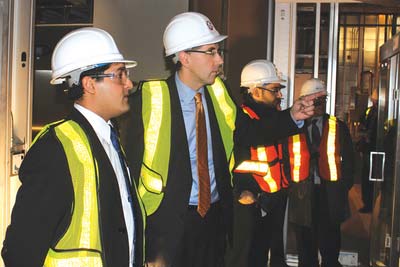 Pain-free investment for city
Bill Jackson, Times Staff
December 14, 2011
People across the globe who undergo a pain-free dental procedure will likely have a local company in Cambridge to thank. Septodont’s Novocol Pharmaceutical facility on Wolseley Court “will be by far the biggest and most modern dental anesthetic production centre in the world”, according to Olivier Schiller, the CEO of Septodont Holdings SAS. His message from France was delivered on behalf of the company’s North American vice president of finance, Todd Beechey, during an announcement here on Tuesday pertaining to a $54-million-dollar expansion project. Pain-free investment for city. Atif Zia, vice president and general
manager of Novocol Pharmaceutical (left), took Kitchener MPP John manufacturing space by about 30 per cent, Milloy on a tour of the company’s Cambridge facility on Thursday, according to Atif Zia, vice president and general prior to an expansion announcement. Bill Jackson, Times Staff manager of the Cambridge facility. Currently there are 300 employees, more than two-thirds of them directly involved in manufacturing. According to a press release, the expansion will help create eight new jobs. Production areas will be modernized and an outdated line will be converted into a research and development centre. The company is acquiring advanced equipment to develop other innovative products for the dental industry and, according to Schiller, looks forward to continuing its investment in Cambridge. “We make solutions that go into the cartridges that your dentist would use to inject you prior to going through some painful procedures in the office, such as getting a filling or a tooth extraction,” said Zia. People might be familiar with products such as Lidocaine, or the company’s flagship product, Septocaine. “What we have here is a full-finish facility,” added Zia. “All the dental anesthetic products are made here. We have about seven different products that are produced and serve a range of different needs of the dentist.” There are approximately 500 million dental injections per year, worldwide, using Septodont anesthetics. Approximately half of them are made at the Cambridge facility that produces between 250 and 270 million cartridges per year, said Beechey. Novocol now boasts a global reach of exports to more than 25 countries. The Cambridge expansion project is bolstered by a $10-million dollar loan from the province, under the Ontario government’s Strategic Jobs and Investment Fund. It’s a no-interest loan over the course of five years, according to Kitchener MPP John Milloy, who was on hand Tuesday for the announcement and a tour of the Cambridge facility. For healthcare and pharmaceutical companies competing internationally, site selection is often based on striking a balance between skilled labour and lowering operating costs, Milloy noted. The local region already produces many of the required skills at post-secondary institutions nearby. Financial incentives such as the loan will help retain and create jobs, he said. Zia said part of the loan agreement is to achieve “1,400 work years” over the next five years by creating or retaining jobs as part of the expansion. Beechey said that the loan will save the company approximately $3 million dollars and was a key reason why ownership in France decided to invest in Ontario. “These advantages are necessary as companies try to compete on a global basis, offsetting other challenges such as trying to compete against lower costs and unfavourable exchange rates,” he said. Beechey admitted that Septodont’s investment is unique for the area. “There are relatively few pharmaceutical companies in this region, and so us growing in Ontario is unusual in the industry space.” This article is for personal use only courtesy of CambridgeTimes.ca - a division of Metroland Media Group Ltd.