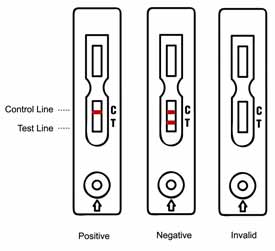 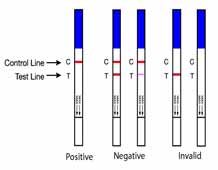 Cod FPO 7.3.1 2/ 10
First Romanian rapid tests manufacturer ! Holding the sample dropper vertically, add 5 drops (0.2 ml) of specimen “See Now” Amphetamine Strip/Cassette Test
without air bubbles into the sample well . For strip test, immerse the strip into the urine cup and take out the strip For in vitro Diagnosis Use
after 10 sec. Lay the strip on a flat, clean, dry, non-absorbent surface Product Code: SN 7.1
Read the results at 10 minutes. Ensure that the background of the test area is white before interpreting the result INTRODUCTION
The “See Now” Amphetamine (AMP) Test is a rapid and convenient INTERPRETATION OF RESULTS
immunochromatographic in vitro assay. It is intended for the qualitative Positive
detection of the presence of AMP and its metabolites in urine at or above the cutoff level of 1000 ng/ml. The device is designed for professional use. This assay provides only a preliminary result. Clinical consideration and professional judgment should be applied to any drug of abuse test result, particularly in evaluating a preliminary positive result. To obtain a confirmed analytical result, a more specific alternate chemical method is needed. Negative
SUMMARY OF THE TEST
control and test regions. This indicates Amphetamine is central nervous system stimulants that produce alertness, wakefulness, increased energy, reduced hunger, and an overall feeling of well being. Amphetamine can be taken orally, intravenously, by smoking or by nasal inhalation. Large doses of Amphetamine could develop tolerances and physiological dependency and lead to its abuse. Metabolism occurs in the No visible band at the control region. Repeat with a new test kit. If test still liver either by deamination or hydroxylation of the aromatic ring. fails, please contact the distributor with the Amphetamine is also excreted in the urine unchanged. Both d and L forms of Note: A faint line at the test region
The “See Now” AMP Test device contains mouse monoclonal indicates the drug in sample is near the anti-amphetamine antibody colloidal gold conjugate pre-dried on a pad. cut-off level for the test. These samples AMP-BSA conjugates antigen (on test region) and goat anti mouse IgG (on control region) are coated and immobilized on a reaction membrane. The principle of the “See Now” AMP Test is a solid phase, competitive inhibition immuno-chromatographic assay, in which a chemical y labeled drug (drug conjugate) competes with the drug that may be present in urine, for limited STORAGE AND STABILITY
antibody binding sites. When the absorbent pad is soaked with urine, the The test kit can be stored at temperature urine will migrate via capillary action toward the test window where the test reaction occurs. A negative specimen produces two distinct color bands, one (2 to 30°C) in the sealed pouch to the date in the test zone and one in the control zone. A positive specimen produces of expiration. The test kit should be kept away from direct sunlight, moisture only one color band in the control zone. To serve as an internal process control, a control band was designed to indicate that the test is performed properly. This control line should always be seen after test is completed. PRECAUTION
Absence of a colored control line in the control region is an indication of an FOR IN VITRO DIAGNOSTIC USE ONLY. Don’t use it after the expiration date. SPECIMEN COLLECTIONAND STORAGE
• Urine specimen may be col ected at any time in a clean, dry container PERFORMANCE CHARACTERISTICS
• If specimen cannot be assayed immediately, they can be stored at 2-8°C Sensitivity
for up to 72 hours prior to testing or frozen at –20ºC for longer period of The “See Now”Amphetamine Urinary Test detects amphetamine and its metabolites in urine at concentrations equal to or greater than 1000 ng/ml. • Specimens should be equilibrated to room temperature before testing if Specificity
A study was conducted with the “See Now” Amphetamine Urinary Rapid Test • Urine specimens exhibiting visible precipitates should be filtered, to determine the cross-reactivity of amphetamine-related compounds with centrifuged, or allowed to settle so that clear aliquots can be obtained for Table-I Concentration of Morphine-related compounds showing a positive response approximately equivalent to the Morphine cut off set for the test. TEST PROCEDURE
•
Remove the test device from pouch when ready to perform the test .Label the test device with patient or control identification Remove the test device from the sealed pouch by tearing at the notch. Then place the testing device on a level surface 3,4-Methylenedioxyethylamphetamine (MDEA) d,l-3,4-Methylenedioxymethamphetamine (MDMA) A separate study was conducted to determine the cross-reactivity of non-Amphetamine related compounds with the test at concentrations much higher than normally found in the urine of people using or abusing them. No cross-reactivity was detected with the substances listed in Table II. Table- II Compounds tested and found not to cross-react with the test at a 1000 µg/ml concentration in urine Interference Testing
The following conditions were found not to interfere with the test. Accuracy
Accuracy of the “See Now” Amphetamine Urinary Test Device has been evaluated. A total of 80 clinic samples tested (40 negative and 40 positive), This study demonstrated that two assays have an overall of 96.3%. Reproducibility
The precision was determined by replicative assays of both positive and negative urine samples with devices from three different production lots. The resultant data indicated no appreciable inter lot variation when testing both positive and negative samples across three different lots of devices.

Initial Proposals to Combat Drug Driving The Government is very concerned about the recent traffic accidents caused by driving under the influence of drugs, particularly drugs of abuse. We are determined to introduce measures as soon as possible to vigorously combat drug driving. This paper briefs Members on our initial proposals to combat drug driving. Background 2. According to s

October 2007 Published in hard copy and on the web at www.saltmatters.org The business address of the Salt Skip Program is Queensland Hypertension Association PO Box 193, Holland Park, QLD 4121, phone (07) 3899 1659, FAX (07) 3394 7815. Use the academic address when writing about salt control —see the panel on page 4. rather grandiose title Salt Matters— ‘Tick’, and co