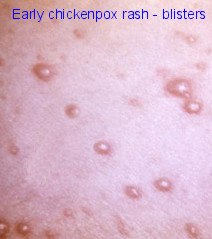 Chicken pox in the Nursery
Chicken pox has been confirmed in the nursery. In accordance with school policy those that present with Chicken Pox – may return to school no sooner
than 5 days after the first spots appeared, and not until the child feels well.
Below is a fact sheet for chicken pox.
Chickenpox in Children Under 12
Chickenpox causes a rash and can make a child feel generally unwell. Treatment aims to ease symptoms until the illness goes. Full recovery is usual in children. Serious complications are rare but are more likely to occur in children with a poor immune system such What is chickenpox?
Chickenpox is an infection caused by the varicella-zoster virus. Most children have chickenpox at some stage. The immune system makes antibodies during the infection. These fight the virus and then provide lifelong immunity. Therefore, it is rare to have more than one bout of chickenpox in your lifetime. What are the symptoms of chickenpox?
• Fever (temperature), aches and headache often start a day or so before a
• Rash. Spots appear in crops. They develop into small blisters and are itchy.
They can be anywhere on the body. Several crops may develop over several days. Some children may be covered in spots, others have only a few or 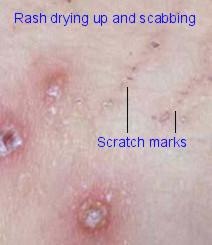 • Dry cough and sore throat are common.
Some children feel quite unwell for a few days. Others appear only mildly ill. Most are much better within a week. The blisters dry up and scab. They gradually fade, but may take up to two weeks to go completely.   What is the treatment for chickenpox?
For most children
Treatment is mainly aimed at easing symptoms whilst the immune system deals
with the virus.
• Give plenty to drink to avoid dehydration.
• Give paracetamol or ibuprofen to ease fever, headaches, and aches and
• Calamine lotion put on the spots may ease itching.
• Antihistamine tablets or liquid medicine for children over one year old
may help with sleep if itch is a problem. Give a dose at bedtime. You can buy these at pharmacies or get them on prescription. • Keep fingernails cut short to stop deep scratching.
For special 'at risk' groups
Some children have a higher risk of developing complications from chickenpox. In
addition to the above treatments, they may need extra treatment such as aciclovir
(an antiviral medicine) or immunoglobulin. If your child has not already had
chickenpox and is in one in the following groups, you should see a doctor urgently
if they have contact with chickenpox, or have symptoms of it:
• Children (babies) less than one month old. • Children with a poor immune system. For example, children with leukaemia, • Children taking certain medication such as steroids, immune suppressing • Children with severe heart or lung disease. • Children with severe skin conditions. Antiviral medication is also used for adults and teenagers who develop chickenpox as they too have a higher risk of complications. However, antiviral medication is not normally advised for healthy children over one month and under 12 years who develop chickenpox. Is chickenpox infectious?
A person with chickenpox is very infectious. The virus spreads in the air from person to person. For example, if you have not already had chickenpox, you stand a good chance of catching it if: • you are in the same room as someone with chickenpox for more than 15 • you have any 'face-to-face' contact with someone with chickenpox, such as a It takes 11-20 days to develop symptoms after catching the virus (the 'incubation period'). Protecting others
A person with chickenpox is infectious from two days before the rash first appears until all the spots have crusted over (commonly about 5-6 days after onset of the rash). When a child is infectious keep him or her off school or nursery and also away from 'at risk' people who may get a severe illness if they get chickenpox. These include: • Pregnant women who have not had chickenpox in the past. Chickenpox can be severe and cause complications during pregnancy. • People with a poorly functioning immune system. For example, people with leukaemia, with HIV/AIDS, on steroid medication, or who are taking • The 'at risk' children listed earlier. Healthy adults who have not had chickenpox may also want to avoid catching it as the illness tends to be worse in adults. Note: people with chickenpox should not travel by air until six days after the last spot appeared. Sourced from www.patient.co.uk Best wishes Miss N Rodgers School Nurse