ARPN Journal of Science and Technology
Quantitative Analysis of Ciprofloxacin Sodium Chloride
Pharmaceutical Infusions Using Ultraviolet-visible Spectroscopy
1Affo, W., 2 Mensah-Brown, H., 3 Awuku, J. F., 4 Markwo, A
1, 3, 4 Department of Chemistry, University of Ghana, Legon, Ghana 2 Department of Food Process Engineering University of Ghana, Legon, Ghana ABSTRACT
This work was undertaken to develop a rapid and low cost ultraviolet-visible spectrophotometric method for determiningthe amount of ciprofloxacin in ciprofloxacin sodium chloride pharmaceutical infusions. Ultraviolet-visiblespectrophotometric analysis was performed at a pre-determined maximum wavelength of 326 nm with water as diluent and0.018 mg/ml sodium chloride solution as blank. The method was validated for linearity, accuracy, precision andreproducibility. The method was used to estimate the amount of ciprofloxacin in four infusion samples on the Ghanaianmarket. The regression data for the calibration curve exhibited a good linear relationship (R2 = 0.999) having a regressionequation, y =74.554 x + 0.019 over a concentration range of 0.002 - 0.012 mg/ml. The amount of ciprofloxacin in samples 252.1662 mg/100 ml respectively. These concentrations were greater than that indicated on the packs which were 200mg/100 ml for all the samples. When the method was tested with a prepared standard of concentration 0.2 mg/ml, the result 0.0002 representing an increment of 3.4 % more than expected. Hence, the method could only account for 3.4 % of the increase in the sample concentration. The proposed method gave good validation results andthe statistical analysis performed proved that the method is precise, accurate and reproducible and hence can be employedfor routine analysis of ciprofloxacin in intravenous infusions.
Keywords: Absorbance, ciprofloxacin, fluoroquinolone, ultraviolet-visible spectroscopy
1. INTRODUCTION
gram-positive bacteria. The gram bacteria are the main The quinolone antimicrobials embrace a group of ways of grouping bacteria into two large groups according synthetic substances that possess a basic nucleus of an N-1- to their ability to retain the crystal violet dye in gram alkylated-3-carboxypyrid-4-one ring fused to another staining protocol or not [3]. Bacteria that retain the dye are aromatic ring with a substituent on it. The first group of stained blue or violet and are called gram positive bacteria; these quinolones surfaced in the 1960’s for treatment against certain gram negative bacteria. They were Enterococcus, Bacillus, Clostridium and Listeria [4, 5] .
considered as minor urinary tract disinfectants: an example Those that are not stained are gram negative, examples are is nalidixic acid. Further work resulted in the discovery of Neisseria gonorrhoeae, Neisseria meningitides, Moraxella the fluoroquinolones which had a fluoro group on position catarrhalis, Hemophilus influenza, Klebsiella pneumonia, six of the basic nucleus and were more active biologically [1]. Fig.1 gives the general structure of fluoroquinoline.
Escherichia coli, Proteus mirabilis, Enterobacter cloacae,Serratia marcescens, Helicobacter pylori, Salmonella enteritidis, Salmonella typhi, etc. [6].
Ciprofloxacin is active against infections that are caused by most of the above mentioned gram bacteria. The fluoroquinolones are selective against the bacterial enzyme because the bacterial enzyme is structurally different from the mammalian enzyme. [7, 8] Ciprofloxacin is used totreat urinary tract infections, typhoid fever, etc. [9].
Fig 1: General structure of the fluoroquinolones
Ciprofloxacin has no chiral center in its structure as shownin Fig. 2.
Ciprofloxacin chemically is 1-cyclopropyl-6- quinolinecarboxylic acid [2]. It is a broad spectrumantibacterial agent which belongs to the fluoroquinolone family. The fluoroquinolones (cinoxacin, ciprofloxacin,nalidixic acid and norfloxacin) act by inhibiting DNAgyrase and thus preventing bacteria DNA replication.
These chemotherapeutic agents are used particularly in Fig 2: Structure of Ciprofloxacin

ARPN Journal of Science and Technology
Intravenous ciprofloxacin is most frequently ciprofloxacin in the Aldrich Chemical Catalogue. The associated with side effects such as nausea, diarrhea, melting point of the crystalline material was also obtained.
central nervous system disturbance, infusion site reactions,hepatic enzyme abnormalities, eosinophilia, headache, 2.2 Stock Preparation
restlessness, and rash. The majority of these effects are of A stock solution of concentration 0.05 mg/ml was mild to moderate severity. An overdose of ciprofloxacin prepared by first dissolving 0.02 g of crystalline can lead to the following effects: headaches, dizziness, ciprofloxacin hydrochloride with 10 ml of distilled water in drowsiness, disorientation, slurred speech, tremors, nausea a 100 ml beaker. The resulting solution was then and vomiting, diarrhea, abdominal (stomach) pain, kidney transferred quantitatively into a 100 ml volumetric flask, swirled for complete dissolution and topped to the markwith distilled water. A 25 ml aliquot of this solution was A variety of analytical methods have been taken into another 100 ml volumetric flask, topped to the developed for the analysis of drugs of the 4-quinolones mark with distilled water, corked and labeled stock A. The [11], some of which are High Performance Liquid procedure was repeated to obtain stock B.
Chromatography (HPLC) recommended by the Britishpharmacopoeia [12], High Performance Thin Layer 2.3 Preparation of Standards
Standard solutions of concentrations ranging from Atomic Absorption Spectrometry (AAS). These methods 0.002 mg/ml to 0.012 mg/ml at intervals of 0.002 mg/ml are expensive and mostly unavailable in many laboratories were prepared. From each of the stock, 2 ml, 4 ml, 6 ml, 8 in developing countries including Ghana.
ml, 10 ml and 12 ml were taken into separate 50 mlvolumetric flasks using a 10 ml graduated pipette and There is, therefore, the need to develop a method topped to the mark with distilled water. These were corked that is less expensive and with equipment that is widely and labeled A1 – A6 and B1 – B6 to obtain two sets of
available. Ultraviolet-visible spectroscopy was considered standards from the respective stock.
and it is one method that is less expensive, easily availableand effective for analyzing drugs belonging to the 2.4 Preparation of the Sample
quinolone group. It involves absorption of radiation in the Four brands of ciprofloxacin sodium chloride range of 200 nm to 800 nm within the electromagnetic pharmaceutical infusions were obtained from various spectrum [13]. Absorption occurs at a specific part of the pharmacies in Accra. Sample solutions of concentration molecule - the chromophore and absorption is highest at 0.004 mg/ml were prepared. A 20 ml aliquot of the drug the maximum wavelength of 326 nm [14]. Absorption that sample was transferred into a 100 ml volumetric flask and leads to electronic transitions from non-bonding (n) to pi- topped to the mark with distilled water. A 1 ml aliquot of antibonding (π*) and from pi-bonding (π) to π* are of great the resulting solution was taken into another 100 ml diagnostic value in the ultraviolet-visible region.
volumetric flask and distilled water added to the mark.
Ultraviolet-visible spectroscopy has been better applied inassaying than identification, especially in research. The 2.5 Blank Preparation
amount of metals in certain sample substances can bedetermined by this method. This principle is also applied in I. Sample blank
drug metabolites, where samples are taken from various Sodium chloride solution with a concentration of sites of the body and analyzed to determine the amount of 0.018 mg/ml was prepared as sample blank- by dissolving metabolites at those sites. In reactions leading to the 0.4500 g of sodium chloride with 10 ml of distilled water formation of products that can absorb within the UV- in a 50 ml beaker. The resulting solution was transferred visible region, UV-visible spectroscopy can be used to into a 50 ml volumetric flask and topped to the mark with distilled water. A 10 ml aliquot of the resulting solutionwas taken into a 50 ml volumetric flask and distilled water The objective of this study is to employ UV- added to the mark. Finally, 0.5 ml of this solution was visible spectroscopic methods to develop an accurate, taken into another 50 ml volumetric flask and topped to the precise, reproducible and economic routine method for the mark with distilled water. It was corked and labeled sample estimation of ciprofloxacin intravenous infusions on the Standard blank
2. MATERIALS AND METHODS
Distilled water was used as blank for the 2.1 Purity and Identification Test
All solutions prepared were used within twelve Crystalline ciprofloxacin was obtained and its purity checked. Thin layer chromatography (TLC) analysiswas carried out using silica plates with a mixture ofmethanol, chloroform, ammonia and hexane in ratios: 35 2.6 Measurement of Absorbance
%: 43 %: 17 %: 5 % v/v respectively as the eluent and spectrophotometer was used for the measurement of developed with iodine vapour. Infra-red (IR) spectrum of absorbance. The equipment was warmed for 5 minutes, the material was superimposable with the spectrum of 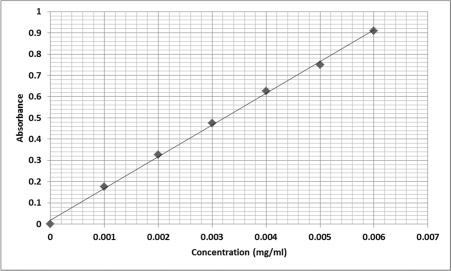 ARPN Journal of Science and Technology
after which a wavelength scan was done to obtain thewavelength of maximum absorption. The wavelength of From the absorbance of the samples, their maximum absorption obtained was 326 nm. The corresponding concentrations were interpolated from the spectrophotometer was then set to a single wavelength calibration curve and subjected to mathematical and mode, which is 326 nm. The spectrophotometer was zeroed statistical calculations to obtain the concentration of the using distilled water. The cuvette was rinsed and filled with samples analyzed as well as the associated error. Table 4 standard A1 and the absorbance recorded. This was below shows the concentrations of the samples with their repeated for the remaining standards A2 - A6 and B1 - B6.
corresponding expiry date and manufacturer’s specified The cuvette was rinsed with methanol followed by distilled concentration, and experimental concentrations of the water in-between measurements. The cuvette was then rinsed and filled with the first sample prepared from theciprofloxacin sodium chloride pharmaceutical infusion and 4. DISCUSSION
absorbance taken. The absorbance of all the samples including the sample blank (0.018 mg/ml sodium chloride) obtained showed a single spot on TLC, with an Rf value of 0.48. The melting point was found to be 254 - 256 °C(literature value 255 – 257 °C). The IR spectrum was 2.7 Data Analysis
identical to that of ciprofloxacin in the Aldrich Chemical The data obtained for the standards were taken Catalogue. A calibration curve Eq. (1) (Fig. 1); with a through mathematical calculations to obtain their corresponding regression coefficient R2 = 0.999 was respective concentrations. The concentrations together with obtained with high linearity which conformed to the Beer- their corresponding absorbance were taken through least Lamberts’ law and this also conformed to the specification square analysis (Skoog et al., 2004) to obtain the least of the United States pharmacopoeia. The sodium chloride square line for the calibration curve given in Fig. 3 and used in this study had some level of absorption (0.001), represented by Eq. (1). All associated errors of the samples which was factored in the calculation and it is necessary to consider such compounds in similar experiments.
Ciprofloxacin sodium chloride pharmaceutical infusions from four different manufacturing companies Where, y is absorbance and x is concentration of sold on the Ghanaian market were sampled. The samples were labeled A - D. The concentrations of all the samplesanalyzed were greater than that specified by themanufacturers. On validating the method with a standardsolution of 0.2 mg/ml ciprofloxacin, an increase of 3.4 %was observed whilst the sample concentration gave anaverage increment of 22.5 %. This implies that the methodcan only account for 3.4 % of this increment and theremaining attributed to the content of the drug.
5. CONCLUSION
The proposed UV-visible spectrophotometric reproducible and highly sensitive for the analysis ofciprofloxacin. Therefore, it can be used routinely for the Fig 3: Calibration curve for ciprofloxacin
determination of ciprofloxacin in ciprofloxacin-basedpharmaceutical formulations on the Ghanaian market.
3. RESULTS
REFERENCES
3.1 Purity and Identity Analysis
To use the crystalline ciprofloxacin material for Lemke, T. L., Williams, D. A., Roche, V. F.,Zito S.
the calibration curve it was necessary to determine its W., (2008). Foye’s Principle of Medicinal purity and identity. The observed melting point was 254 - Chemistry, 6th Ed., Lippincott Williams and 256 ˚C. The thin-layer chromatography (TLC) analysis Wilkins: A Wolters Kluwer Business, Philadelphia, showed a single spot with an Rf value of 0.48. The IR spectrum of the crystalline material was superimposablewith the IR spectrum of the ciprofloxacin in the Aldrich Bhalerao, S.R., Rote, A.R., (2012). Application of Chemical Catalogue. Table 1 gives prominent peaks in UV spectrophotometric methods for estimation of ciprofloxacin, whereas Table 2 and Table 3 give the ciprofloxacin and tinidazole in combined tablet dosage form, International Journal of Pharmacy and ciprofloxacin material and ciprofloxacin sodium chloride Pharmaceutical Sciences, vol. 4 (3), pp. 464-467.
pharmaceutical infusion samples respectively.

Consensus Statement on Emergency Contraception Twenty-four experts from around the world, representing the fields of research, policy, may need these methods occasionally. Millions communications, women’s advocacy and of unwanted pregnancies could be averted if medicine, gathered at the Rockefeller emergency contraceptives were widely Foundation Conference in Bellagio, Italy,