Chem. Res. Toxicol. 2006, 19, 164-172
The Greater Reactivity of Estradiol-3,4-quinone vs
Estradiol-2,3-quinone with DNA in the Formation of Depurinating
Adducts: Implications for Tumor-Initiating Activity
Muhammad Zahid, Ekta Kohli, Muhammad Saeed, Eleanor Rogan, and Ercole Cavalieri* Eppley Institute for Research in Cancer and Allied Diseases, UniVersity of Nebraska Medical Center, 986805 Nebraska Medical Center, Omaha, Nebraska 68198-6805 Strong evidence supports the idea that specific metabolites of estrogens, mainly catechol estrogen- 3,4-quinones, can react with DNA to become endogenous initiators of breast, prostate, and other humancancers. Oxidation of the catechol estrogen metabolites 4-hydroxyestradiol (4-OHE2) and 2-OHE2 leadsto the quinones, estradiol-3,4-quinone (E2-3,4-Q) and estradiol-2,3-quinone (E2-2,3-Q), respectively. Thereaction of E2-3,4-Q with DNA affords predominantly the depurinating adducts 4-OHE2-1-N3Ade and4-OHE2-1-N7Gua, whereas the reaction of E2-2,3-Q with DNA yields the newly synthesized depurinatingadduct 2-OHE2-6-N3Ade. The N3Ade adducts are lost from DNA by rapid depurination, while the N7Guaadduct is lost from DNA with a half-life of ∼3 h at 37 °C. To compare the relative reactivity of E2-3,4-Qand E2-2,3-Q, the compounds were reacted individually with DNA for 0.5-20 h at 37 °C, as well as inmixtures (3:1, 1:1, 1:3, and 5:95) for 10 h at 37 °C. Depurinating and stable adducts were analyzed. Insimilar experiments, the relative reactivity of 4-OHE2 and 2-OHE2 with DNA was determined afteractivation by lactoperoxidase, tyrosinase, prostaglandin H synthase (PHS), or 3-methylcholanthrene-induced rat liver microsomes. Starting with the quinones, the levels of depurinating adducts formed fromE2-3,4-Q were much higher than that of the depurinating adduct from E2-2,3-Q. Similar results wereobtained with lactoperoxidase or tyrosinase-catalyzed oxidation of 4-OHE2 and 2-OHE2, whereas withactivation by PHS or microsomes, a relatively higher amount of the depurinating adduct from E2-2,3-Qwas detected. These results demonstrate that the E2-3,4-Q is much more reactive with DNA than E2-2,3-Q. The relative reactivities of E2-3,4-Q and E2-2,3-Q to form depurinating adducts correlate with thecarcinogenicity, mutagenicity, and cell-transforming activity of their precursors, the catechol estrogens4-OHE2 and 2-OHE2. This is essential information for understanding the cancer risk posed by oxidationof the two catechol estrogens.
Introduction
Catechol estrogens, 2-hydroxyestrone(estradiol) [2-OHE1(E2)] The initial failure to demonstrate that estrogens induce 1(E2), are among the major metabolites of E1 and mutations in bacterial and mammalian test systems (1-6) 2. If these metabolites are oxidized to the electrophilic catechol estrogen quinones, they may react with DNA. The 4-catechol resulted in the classification of estrone (E1)1 and estradiol (E2) estrogens are carcinogenic in Syrian golden hamsters, as well as epigenetic carcinogens that function mainly by stimulating as CD-1 mice (1, 20, 21), whereas the 2-catechol estrogens are abnormal cell proliferation via estrogen receptor-mediated not carcinogenic in the hamsters (1, 20) and are borderline processes (3, 7-12). The stimulated cell proliferation can result carcinogens in CD-1 mice (21).
in more accumulation of genetic damage leading to carcino- genesis (9, 10, 12).
1(E2) is easily oxidized to catechol estrogen-3,4- Compelling strong evidence has resulted in a new paradigm predominantly depurinating adducts (13-16). These adducts of cancer initiation by estrogens. Discovery that specific generate apurinic sites that may lead to cancer-initiating oxidative metabolites of estrogens can react with DNA (13- mutations (17-19), which transform cells (22-25), thereby 16) led to and supported the hypothesis that estrogen metabolites can become endogenous chemical carcinogens by generatingmutations (17-19) that can lead to initiation of cancer. The To determine the DNA adducts of E1(E2)-3,4-Q, standard initiating mechanism can occur in hormone-dependent and adducts were synthesized by reaction of the quinones with deoxyguanosine (dG), deoxyadenosine (dA), and the nucleobaseAde (16, 26). The reaction of E1(E2)-3,4-Q with dG affordedthe depurinating adduct 4-OHE1(E2)-1-N7guanine (Gua) by 1,4- * To whom correspondence should be addressed. Tel: 402-559-7237.
Fax: 402-559-8068. E-mail: [email protected]
Michael addition (26). The reaction of E1(E2)-3,4-Q with dA 1 Abbreviations: Ade, adenine; COSY, chemical shift correlation did not produce any adduct. However, the reaction of these spectroscopy; dA, deoxyadenosine; dG, deoxyguanosine; E1, estrone; E2, quinones with Ade resulted in the formation of 4-OHE1(E2)-1- estradiol; E2-2,3-Q, estradiol-2,3-quinone; E2-3,4-Q, estradiol-3,4-quinone; N3Ade by 1,4-Michael addition (16). The rationale for the FAB-MS, fast atom bombardment tandem mass spectrometry; Gua, guanine;HMBC, heteronuclear multiple bond correlation; HSQC, heteronuclear single formation of N3Ade adducts is described in the Results and quantum coherence; IBX, 2′-iodoxybenzoic acid; LP, lactoperoxidase; MC, 3-methylcholanthrene; NOE, nuclear Overhauser effect; OHE2, hydroxy- When E1(E2)-2,3-Q was reacted with dG or dA, a different estradiol; PDA, photodiode array; PHS, prostaglandin H synthase; TFA,trifluoroacetic acid; TOCSY, total correlation spectroscopy.
profile of adducts from those formed by E1(E2)-3,4-Q was 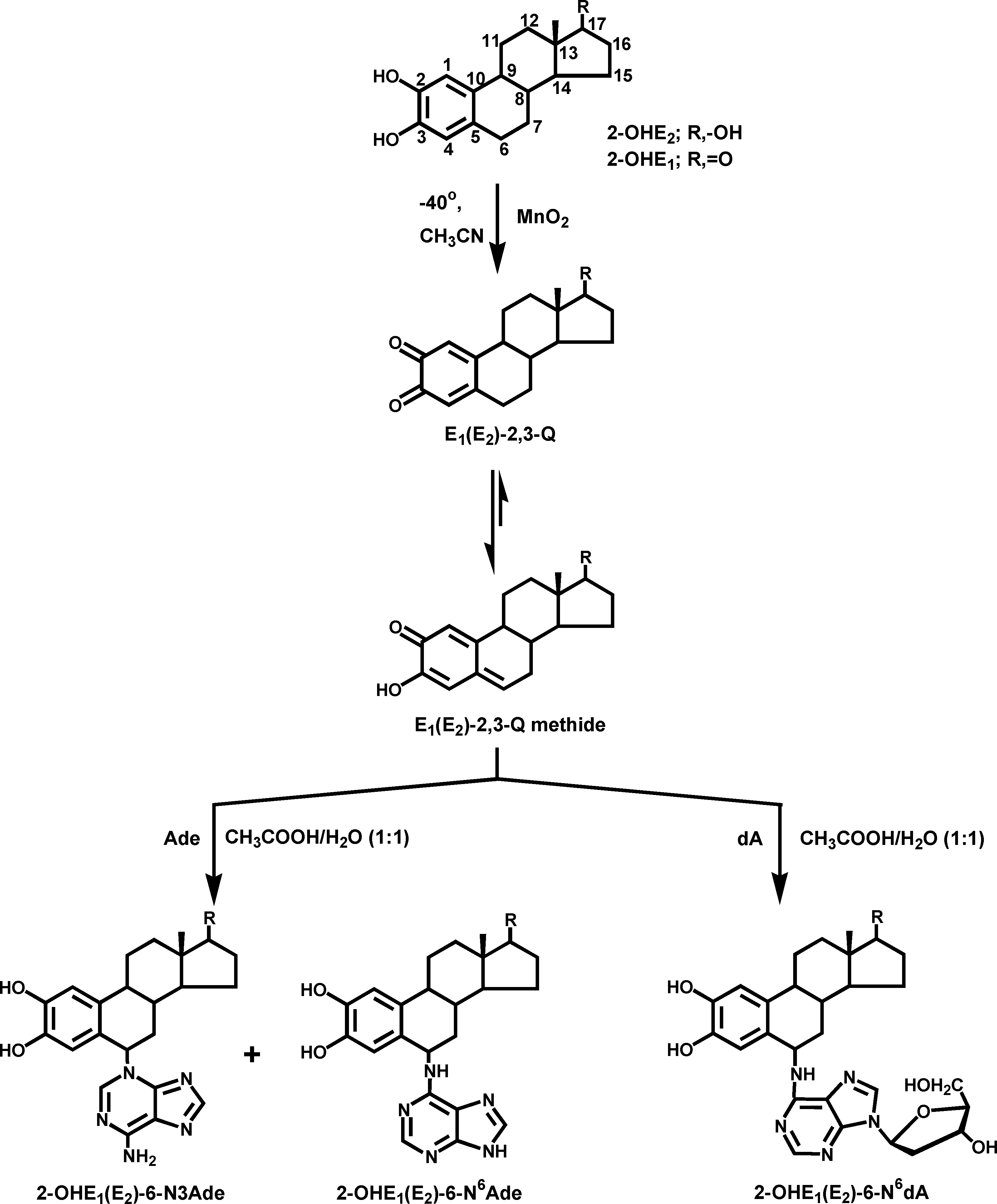 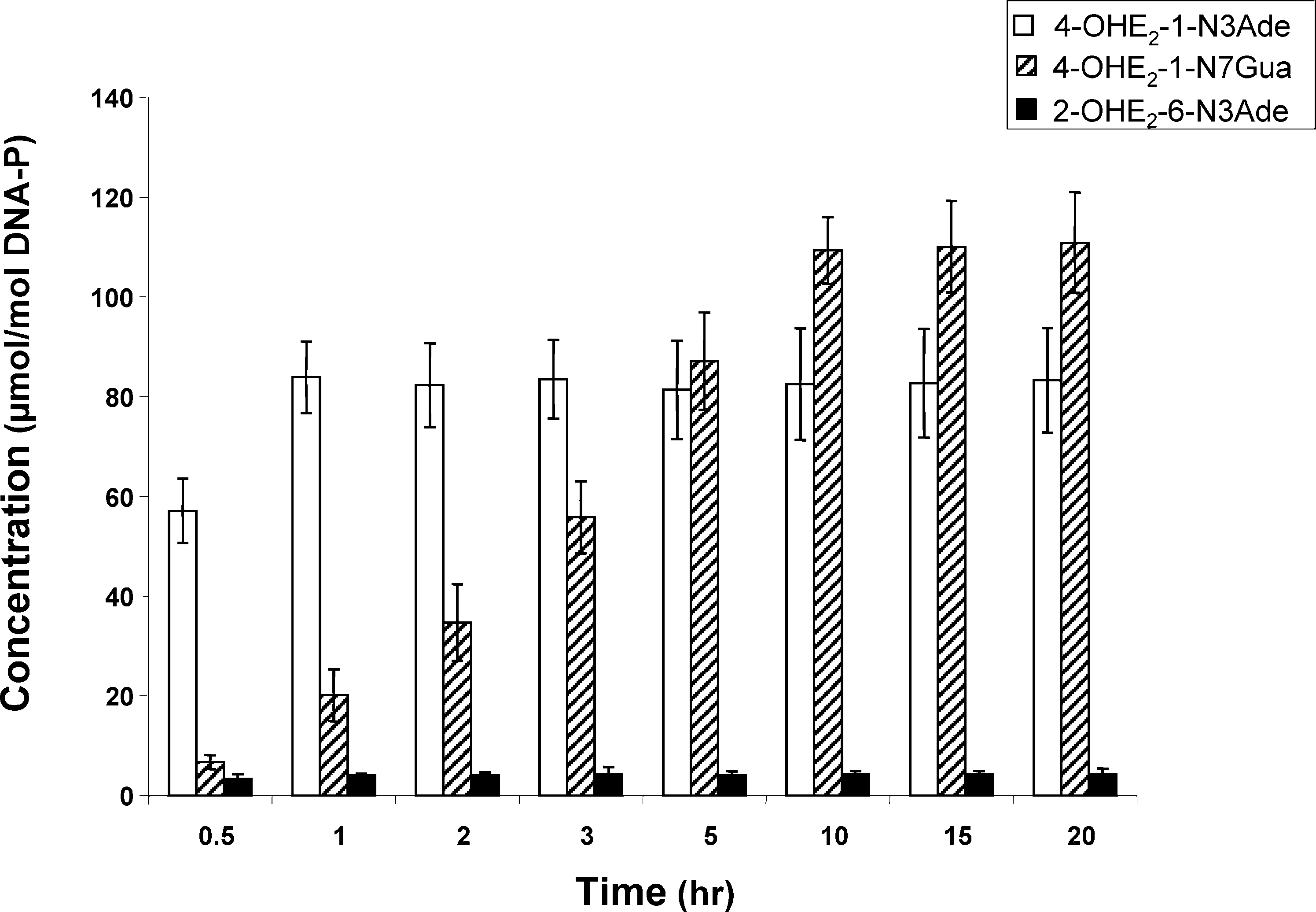 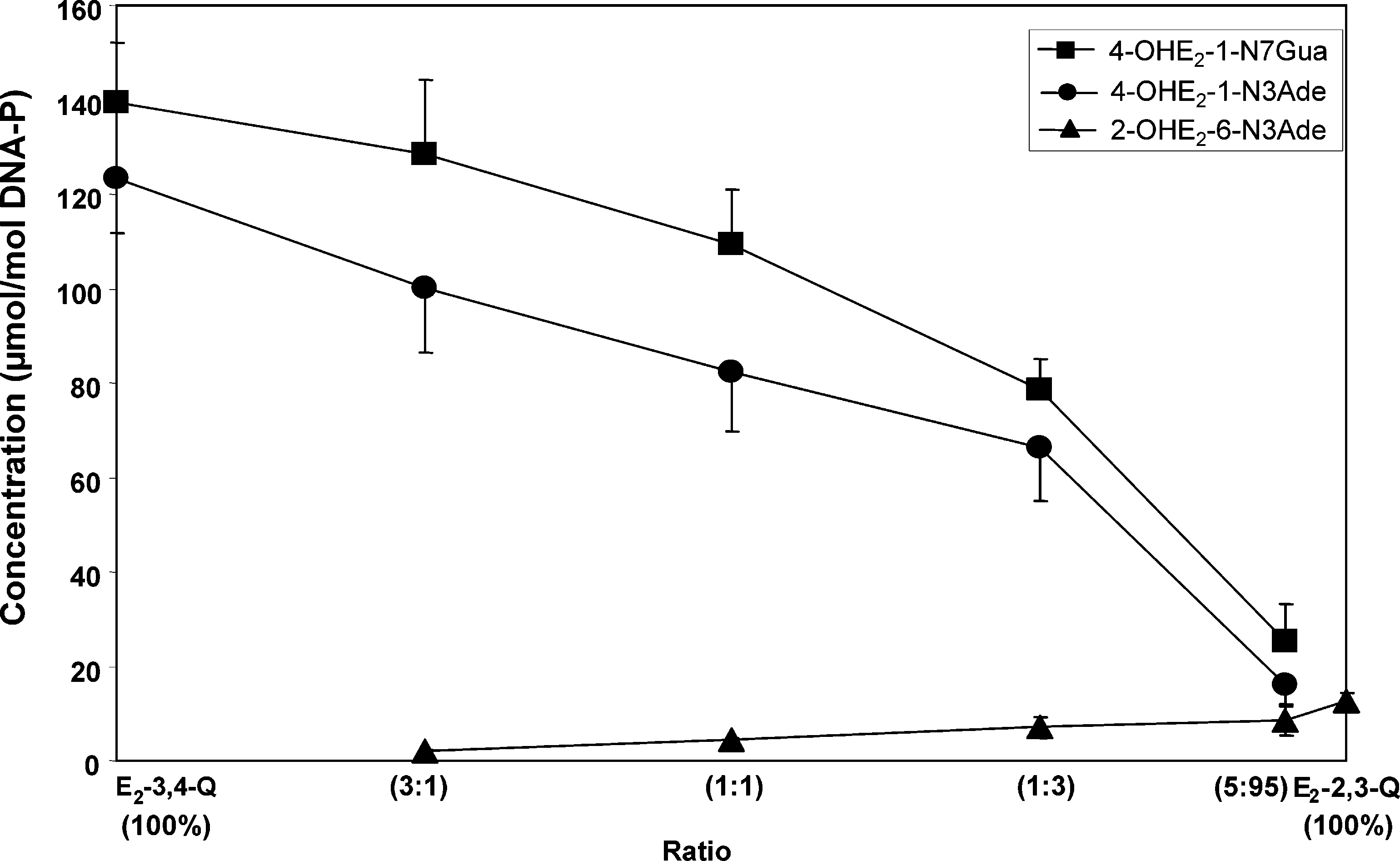 168 Chem. Res. Toxicol., Vol. 19, No. 1, 2006
Figure 3. Depurinating adducts formed by mixtures of E2-3,4-Q and E2-2,3-Q at different ratios after 10 h of reaction with DNA. The level of
stable adducts formed in the mixtures ranged from 0.1 to 1% of total adducts. Mixtures containing 0.87 mM E2-3,4-Q + E2-2,3-Q and 3 mM DNA
in 0.067 M sodium potassium phosphate, pH 7.0, were incubated at 37 °C. At the indicated times, DNA was precipitated with 2 volumes of ethanol
and the depurinating adducts in the supernatant were analyzed.
estrogen moiety. This corroborates substitution at N-3 in the C-17 hydroxy group and one triplet at 3.53 ppm for the C-17 proposed structure. The two signals at 6.80 and 6.30 ppm were proton in the estrogen moiety were also present. The presence assigned as the aromatic protons H-1 and H-4, respectively, of a broad singlet at 7.53 ppm corresponding to one proton based on 1D and 2D NMR studies, which ruled out the suggests that the 6-NH is substituted in the proposed structure.
possibility of the substitution of Ade in the aromatic ring (at The 1H NMR spectra of 2-OHE1-6-N3Ade and 2-OHE1-6-N6- C-1 and C-4) of E2. Furthermore, the spectrum showed the Ade are very similar to those of 2-OHE2-6-N3Ade and 2-OHE2- doublet of one proton at 5.65 ppm, which correlated to a methine 6-N6Ade, except that the former two show no signals for the group at 51.3 ppm in the HSQC experiment. These 1H and 13C C-17 hydroxy group and C-17 proton. Thus, the structure of chemical shifts suggested a substitution of the base at the C-6 2-OHE1-6-N3Ade and 2-OHE1-6-N6Ade is also established. All position of E2. This is in accordance with the earlier observation four compounds showed the desired exact [M + H]+ in their that E1-2,3-Q undergoes tautomerization to its quinone methide (26); thus, the value of 5.65 ppm was assigned to the H-6 of Relative Reactivity of E2-3,4-Q and E2-2,3-Q with DNA.
E2. Furthermore, the resonance of this proton shows COSY Different concentrations of E2-3,4-Q were reacted with 3 mM correlation with aliphatic protons of the steroid skeleton at 1.76 DNA to examine the saturation level in the formation of ppm, assigned as H-7 in COSY and TOCSY experiments. In depurinating adducts (4-OHE2-1-N3Ade and 4-OHE2-1-N7Gua).
addition, H-7 showed correlations in the COSY spectrum with The level of 0.87 mM E2-3,4-Q was found to be saturating for two other protons, which give a mutual multiplet at 1.74-1.87 measurement of the rate of reaction between E ppm. The broad signal at 7.20 ppm, exchangeable with D corresponding to two protons in the 1H NMR spectrum, excludedthe possibility of attachment of the estrogen moiety at the NH Incubations were conducted at 37 °C for 10 h because the of Ade. This was further confirmed by an NOE experiment, in N7Gua adduct depurinates slowly. When E2-3,4-Q was reacted which irradiation of the signal at δ 6.30 (H-4) produced a strong with DNA for 10 h, the adducts 4-OHE2-1-N3Ade and 4-OHE2- effect on the signal at δ 7.47 (H-2, Ade) and vice versa. These 1-N7Gua were detected at approximately equal levels of 130- extensive NMR studies unequivocally establish the structure of 140 µmol/mol DNA-P (data not shown).
the compound as 2-OHE2-6-N3Ade. Although the nucleophilic The slow depurination of 4-OHE2-1-N7Gua is clearly seen attack of the N-3 position of Ade can take place at either face in Figure 2, in which equal amounts of E2-3,4-Q and E2-2,3-Q at C-6 of the estrogen quinone methide, we obtained were reacted with DNA and the depurinating adducts were only one product, in which the attachment occurred at the R analyzed at various time points. The binding of E2-3,4-Q to face (from below the estrogen plane). Attack at the upper face DNA and depurination of the N3Ade adduct was complete appears to be hindered by the methyl group at C-13.
within 1 h, suggesting that depurination was instantaneous. In The 1H NMR spectrum of 2-OHE2-6-N6Ade showed a broad contrast, the depurination of the N7Gua adduct had a half-life singlet integrated as two protons at 9.25 ppm for the two of approximately 3 h at 37 °C and was complete in 10 h. This hydroxy groups, exchangeable with D2O. Three singlets of one slow loss of deoxyribose was previously observed in the reaction proton each at 8.23, 8.07, and 7.73 ppm were assigned to the of E2-3,4-Q with dG to form the N7Gua adduct (39). The adduct H-8, H-2, and NH of the Ade moiety, respectively. Two singlets 2-OHE2-6-N3Ade was formed at a much lower level, 4 µmol/ at 6.67 and 6.55 ppm were assigned to the H-1 and H-4 protons mol DNA-P, and depurination was also immediate (Figure 2).
of the E2 moiety, respectively; one broad singlet at 5.42 ppm The level of stable adducts determined by the 32P-postlabeling (one proton) for the H-6 of the E2 moiety strongly suggests technique was <0.5% of the total adducts formed (data not substitution at the C-6 position; one singlet at 4.40 ppm for the 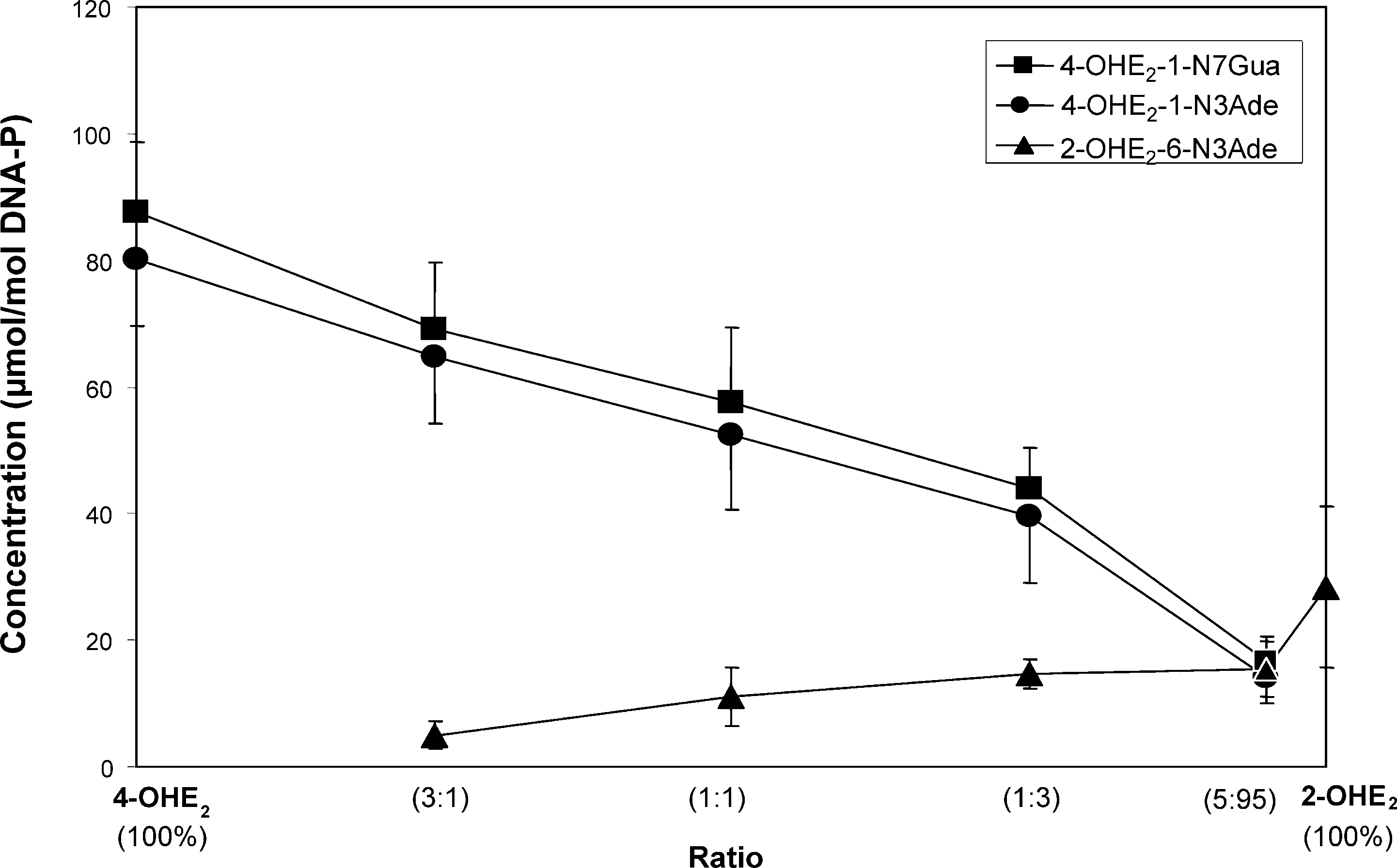 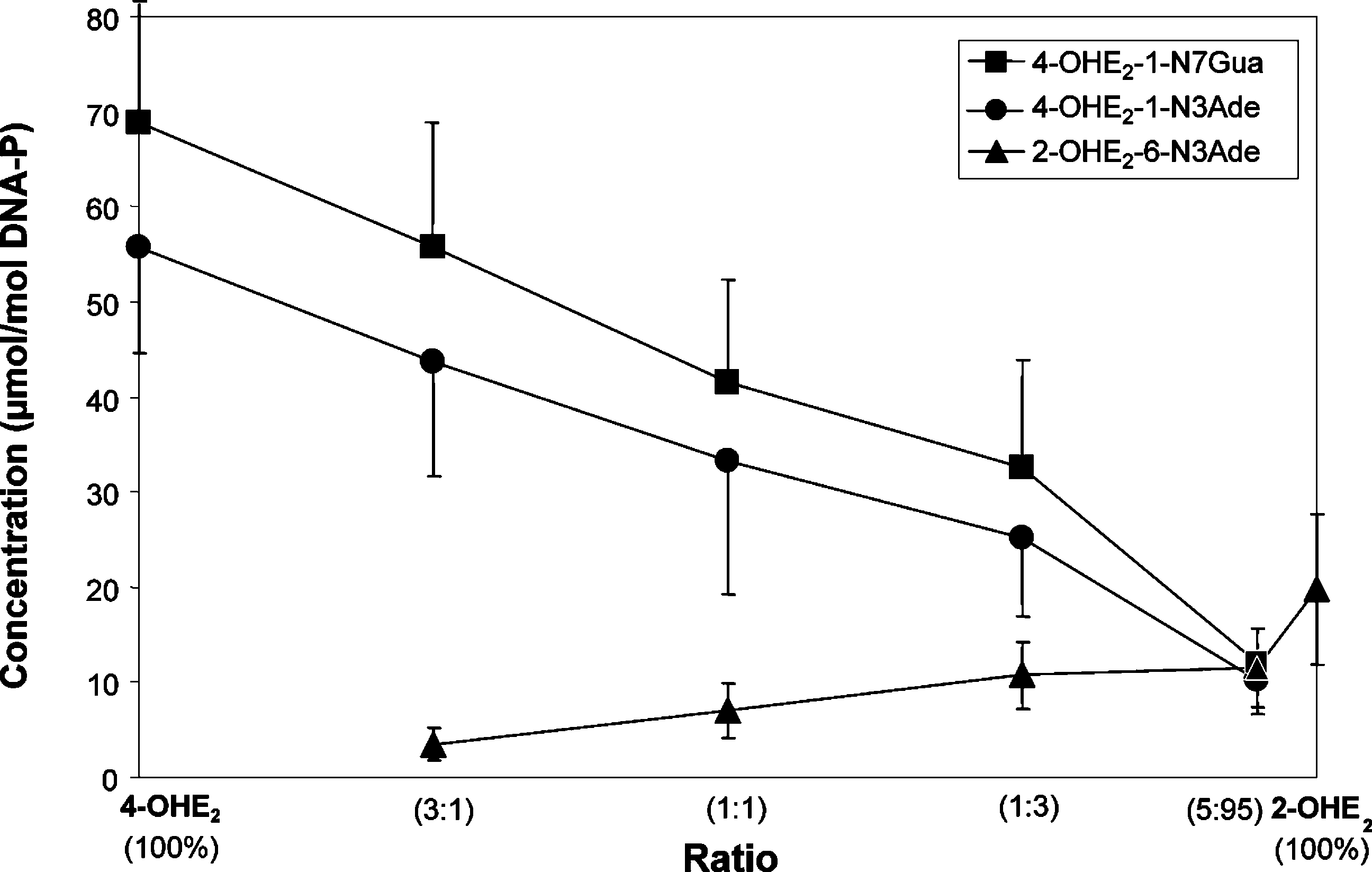 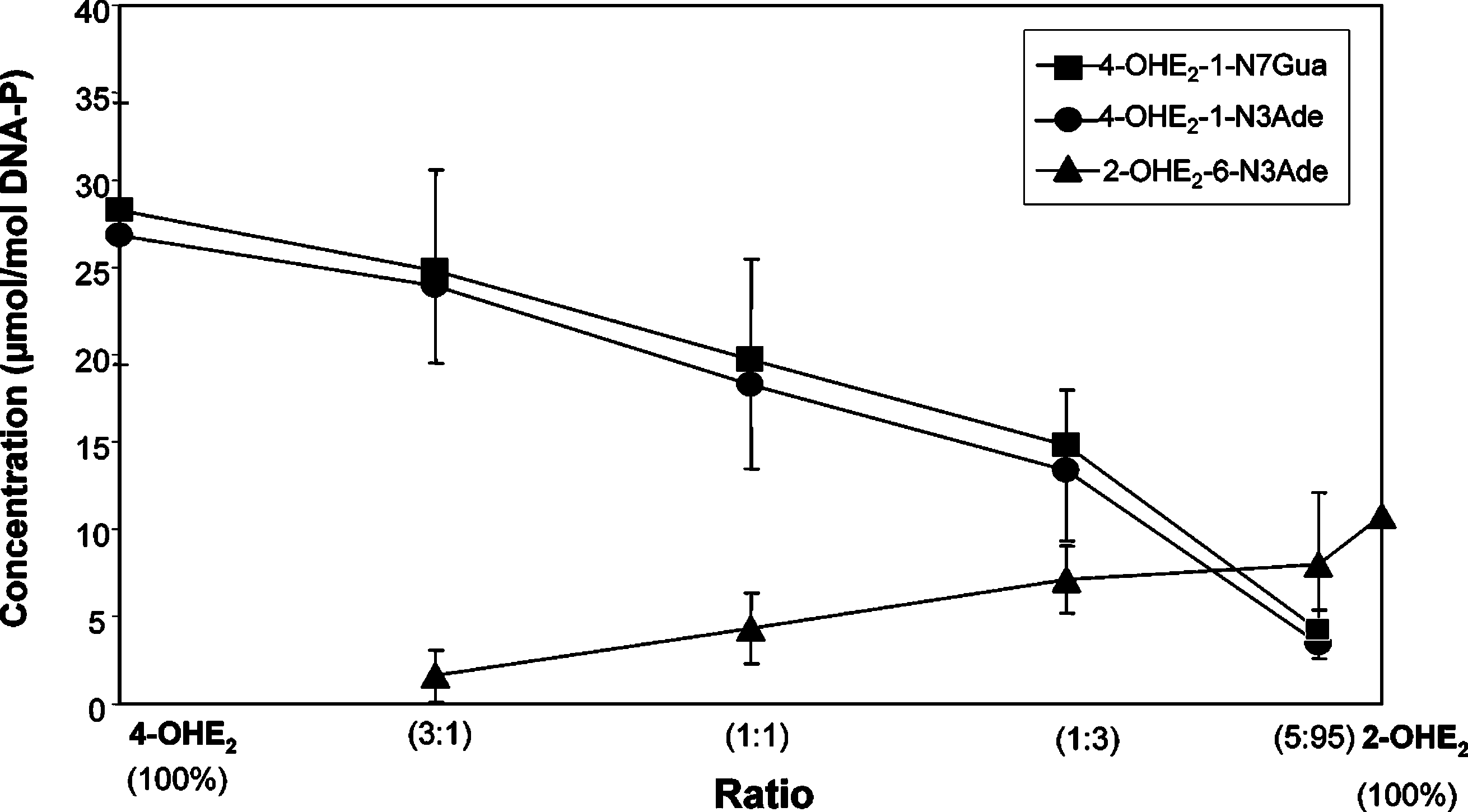 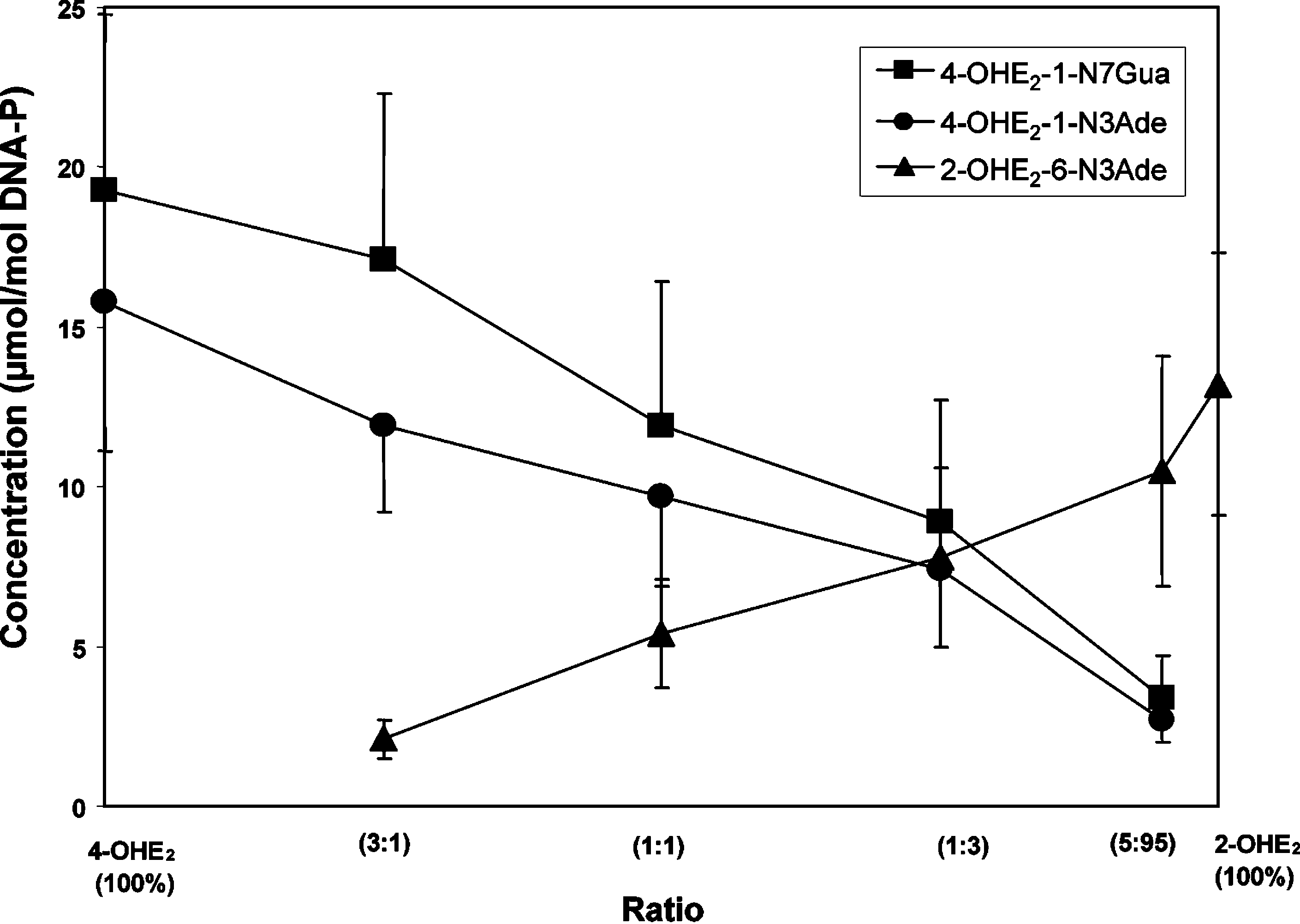 Microsoft word - police and policing in the israeli-arab society_eng.doc