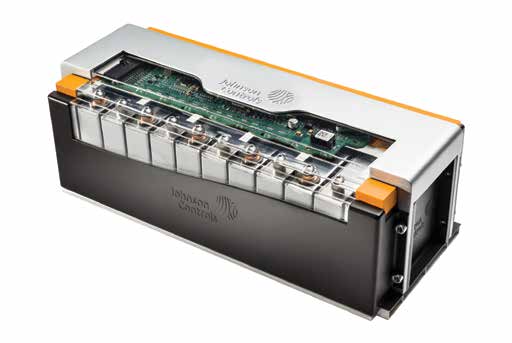 contributing to the nationwide “Schaufenster Elektromobilität” initiative with a project that aims to demonstrate the possibilities of an automated production line for Li-ion battery modules. Li-ion batteries are the core components for any vehicle that features increasing electrification. At the planned pilot production line in Hannover, Germany, new production techniques and As a leading provider of automotive batteries, Johnson processes will be developed and demonstrated. Based Controls is a part of the Hannover-Brunswick-Göttingen- on these, prismatic Li-ion cells can be assembled into Wolfsburg metropolitan region. Johnson Controls is battery modules in an efficient way.
Johnson Controls Power Solutions will spend about EUR 2.8 million on the project.
ExpEctEd bEnEfits of thE nEw
production tEchniquEs:
• Technological basis for future mass assembly of battery modules
• Reduction of production costs through automated assembly
• Adaptability for various dimensions and applications
• Improved product quality by means of optimized and
rangE of applications:
The batteries are designed to enable electric mobility for plug-in
hybrid electric vehicles and electric vehicles. However, as all
vehicles increase their level of electrification the technology should
also have a positive effect on batteries used in other types of
hybrid vehicles (such as the 48-volt Micro Hybrid battery)*.
In addition, the modules could also be used as components for
storing renewable energy.
projEct duration and costs:
Johnson Controls Power Solutions will spend about EUR 2.8 million
on the project, which will run from 2012 to 2015. The German
About Johnson Controls Power Solutions federal government is funding the project with approx. Johnson Controls Power Solutions is the global leader in lead-acid automotive batteries and advanced batteries for Start-Stop, hybrid and electric vehicles. Our 50 manufacturing, recycling and distribution centers supply more than one-third of the about “schaufEnstEr ElEktromobilität”:
world’s lead-acid batteries to major automakers and aftermarket retailers. Through “Schaufenster Elektromobilität” is a project launched by the our innovations we are building the advanced battery industry for hybrid and electric German federal government that showcases the progress made in vehicles. We were the first company in the world to produce lithium-ion batteries electric mobility in recent years and highlights future developments. for mass-production hybrid vehicles. Our commitment to sustainability is evidenced The project is supported by the federal government with funding by our world-class technology, manufacturing and recycling capabilities. Johnson Controls Power Solutions EMEA Am Leineufer 51 *The Micro Hybrid System combines a lead-acid battery and a low-voltage

Ministry of Health and Human Services Public Notice Public Announcement The Ministry of Health and Human Services (MOHHS) would like to inform the public of the occurrence of Dengue Fever cases here in the Turks and Caicos Islands (TCI). As of today, 21st October 2011 there are five (5) known cases of Dengue Fever that have been confirmed by rapid test as well as two clinically sus