__________________________________________________________________________________________
Introduction
Inhibition guarantees a high pool of cAMP. This in turn activates the enzyme lipase which is responsible for the Dimpling of the skin of the buttocks and thighs is hydrolysis of triglycerides. The long chain fatty acids known as cellulite, a typical problem for women. They are then oxidized to CO2 and H2O to produce energy. have a characteristic depot of subcutaneous adipose Caffeine also stimulates microcirculation because the tissue in the gluteal-femoral region (pear shape). The increased release of catecholamines will induce adipose tissue is a type of connective tissue that is vasodilation. The improved blood circulation in the specialized for the storage of fat (triglycerides). There cellulite area helps in the breakdown of fat. is also a gender-related difference in the anatomy of the adipose tissue. In women, the organization of the Carnitine, a quaternary ammonium compound, is subcutaneous fat cell chambers and of the connective another group A active. Carnitine’s role is to carry long tissue septa that divide them, allows vertical stretching chain fatty acids into the mitochondria. These are the of the fat chambers. After stretching, the chambers cellular organelles where fatty acids are oxidized. protrude into the reticular dermis, leading to the Spirulina platensis is a filamentous blue-green algae species that naturally lives in tropical and subtropical Cosmetic ingredients to treat cellulite can be lakes of high alkalinity. The extract of Spirulina cells is a rich source of carotenoids, unsaturated fatty acids, essential amino acids and minerals. The carotenoids protect the skin against oxidative stress. The algae extract is known to stimulate elasticity and firmness of the skin and thus contributes to skin strengthening Compounds that stimulate microcirculation (group B active). A firmer skin resists better the vertical stretching of the fat chambers into the reticular dermis This article describes an anti-cellulite ingredient comprising the soy isoflavone genistein, caffeine, carnitine and an extract of the Spirulina platensis The use of the soy isoflavone genistein as an anti- cellulite active seems at first glance not to be logical because soy isoflavones are known as phytoestrogens. Cellulite is a typical female phenomenon and thus Caffeine is the best known representative of group A. primarily regulated by estrogen. The structures of soy Like theobromine (chocolate) and theophylline (tea) it isoflavones, heterocyclic phenols, are very similar to the belongs to the group of xanthine derivatives. They steroidal estrogen. Thus they can bind to some extent to stimulate mobilisation of lipids by increasing the estrogen receptors. Compared with the principal release of catecholamines and by inhibiting the circulating estrogens in humans, isoflavones are bound activity of the enzyme phosphodiesterase. This at a much lower rate (103-fold less). Genistein, the enzyme normally degrades cyclic AMP (cAMP), an predominant isoflavone in soy, is also a well-known important signaling molecule in the lipolysis process. inhibitor of protein tyrosine kinases (1).

Kinases are involved in the signaling process inside Compared to the cells in the differentiation medium cells. In the skin, they are essential components of the without genistein, labeling of the lipid droplets showed signal transduction pathway that is activated by that genistein at 25 µM reduced adipogenesis by 31% radicals and inflammatory cytokines and leads to the after 3 days and by 42% after 5 days incubation in the expression of collagen- and elastin-degrading enzymes differentiation medium. This strong inhibitory effect is (2;3). These enzymes, called matrix clearly visible in the fluorescence pictures (figure 2). metalloproteinases, are key players in skin aging. Genistein can block this signaling pathway and as a Figure 2: Fluorescence labelling of lipid droplets (right: differentiation medium consequence, radicals and inflammatory cytokines can with genistein; left: control without genistein) no longer induce the breakdown of collagen and elastin. In this way, genistein helps to strengthen the skin (group B active). Several scientific reports show a further physiological activity of genistein. It is an effect that is specifically directed at adipocytes. Genistein was shown to act as a negative regulator of adipogenesis (4;5). Thus, genistein seems to be an efficient anti-cellulite active, belonging to the categories A and B. In the next two chapters, in vitro studies are described that Also the results of the gene array analysis reflected the demonstrate the efficacy of genistein to reduce the efficacy of genistein to inhibit adipogenesis (figure 3). formation of adipose tissue and to enhance the concentration of collagen in a 3D-full skin model. Inhibtion of the Differentiation of Preadipocytes
into Adipocystes

The mass of the adipose tissue can be controlled either by the recruitment of new adipocytes (adipogenesis) or by the volume of the existing adipocytes (Figure 1). ■ Markers of adipogenesis process■ Markers of preadipocytes Figure 3: Effect of genistein on gene expression of preadipocytes in the differentiation medium Figure 1: Differentiation of preadipocytes leads to the formation of new adipocytes Compared to the cells in the differentiation medium without genistein, typical markers for mature adipocytes Adipogenesis is the differentiation process of were reduced whereas markers for preadipocytes were preadipocytes (fibroblast-like) into adipocytes. The conversion is normally regulated by various hormones and is associated with the coordinate induction of key Stimulation of Collagen IV in the Basement
enzymes of the lipid metabolism. In this study, the Membrane
effect of genistein on adipogenesis was investigated. Human preadipocytes were cultured until the cells Most important for the strength of the skin tissue are the reached confluence. Then the medium was replaced collagen proteins. There are at least 14 types of by a specific differentiation medium with genistein. collagens that differ in their structural organization. The controls were preadipocytes kept in the normal Collagen IV forms sheet-like networks and is specific medium (not differentiated control) and preadipocytes for basement membranes. The skin basement membrane cultured in the differentiation medium without is a thin matrix between the epidermis and the dermis genistein. The conversion of preadipocytes into and serves as an adherent connection between the two mature adipocytes was analyzed using two methods: skin layers. The basement membrane is very important 1. Demonstration of accumulation of lipids in large fat for the attachment of the basal keratinocytes and for droplets (adipocyte-specific phenotype). The lipid their proliferation. A natural basement membrane is also droplets were labeled with a fluorescent dye formed in 3D-full skin models. This model was used to (AdipoRed®). The number of total cells was analyze the effect of genistein on the synthesis of controlled by Hoechst staining of the cell nuclei. 2. collagen IV. The in vitro skin model was incubated for Analysis of adipocyte-specific metabolism by gene several days with a medium containing 5 µM genistein. array. A chip containing 96 genes related to The concentration of collagen IV was analyzed with immunofluorescence microscopy using anti-collagen IV 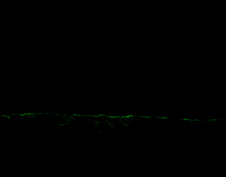 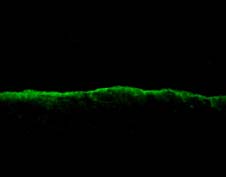 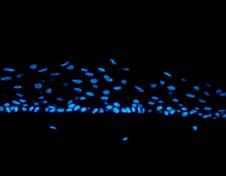 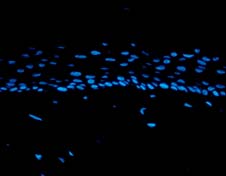 antibodies. The number of total keratinocyte and fibroblast cells was controlled by Hoechst staining of The immunofluorescence pictures (figure 4) show the localization of collagen IV in the basement membrane. Incubation of the skin model in a medium with genistein clearly stimulated the synthesis of collagen IV (+ 53% after 6 days). The analysis of cell nuclei showed that this stimulation was specific and not only Figure 5: Improvement of skin elasticity and smoothness after 6 weeks application of a cream with 4% Iso-SlimComplex Figure 4: Immunofluorescence labelling of collagen IV (upper row) and cell nuclei (lower row). The pictures on the right are from 3D-full skin models incubated with genistein. On the left side are pictures from skin models Figure 6: Reduction of cellulite appearance after 6 weeks application of a cream Clinical Study with an Anti-Cellulite Formulation
A cosmetic ingredient to treat cellulite (Iso- SlimComplex), comprising the soy isoflavone
References
genistein, caffeine, carnitine and an extract of the Spirulina platensis algae, was tested in a clinical study (1) Akiyama T., Ishida J., Nakagawa S., Ogawara H., Watanabe S., over 6 weeks with 20 women aged from 39 to 58 with Itoh N., Shibuya M. and Fukami Y. (1987) Genistein, a specific light to heavy cellulite. A cream containing 4% inhibitor of tyrosine-specific protein kinases. J. Biol. Chem. 262: 5592-5595 IsoSlimComplex was applied once daily on the right thigh. The other thigh stayed untreated and served as a (2) Kajanne R., Miettinen P., Mehlem A., Leivonen S.-K., Birrer M., control. The following skin parameters were Foschi M., Kähäri V.-M. and Leppä S. (2007) EGF-R Regulates MMP measured: smoothness (PRIMOS system), elasticity Function in Fibroblasts Through MAPK and AP-1 Pathways. J. Cell. Physiol. 212: 489 – 497 (cutometer), thigh circumference and cellulite degree (3) Xu Y., Shao Y., Voorhees J.J. and Fisher G.J. (2006) Oxidative inhibition of receptor-type protein-tyrosine phosphatase kappa by The results clearly demonstrated the efficacy of Iso- ultraviolet irradiation activates epidermal growth factor receptor in human keratinocytes. J. Biol. Chem. 281: 27389 – 27397 SlimComplex. Compared to the untreated areas, elasticity and smoothness improved after 6 weeks’ (4) Park H.J., Yang J.Y., Ambati S., Della-Fera M.A., Hausman D.B., application by 57% and 41% respectively (figure 5). Rayalam S. and Baile C.A. (2008) Combined effects of genistein, The circumference of the right thigh was reduced by quercetin, and resveratrol in human and 3T3-L1 adipocytes. J. Med. 3.8 cm after 6 weeks whereas the circumference of the untreated thigh was only reduced by 0.8 cm. There (5) Liao Q.C., Li Y.L., Qin Y.F., Quarles L.D., Xu K.K., Li R., Zhou was a visible improvement of the cellulite appearance. H.H. and Xiao Z.S. (2008) Inhibition of adipocyte differentiation by The cellulite degree dropped from 3.7 to 2.5 after 6 phytoestrogen genistein through a potential downregulation of weeks treatment (Figure 6). There was no visible extracellular signal-regulated kinases 1/2 activity. J. Cell. Biochem. change in cellulite on the untreated thigh. _____________________________________________________________________________________________ Bolimattstrasse 1, 5033 Buchs / Switzerland Phone: +41 62 836 17 31 Fax: +41 62 836 14 05 [email protected], www.mibellebiochemistry.com