Movement DisordersVol. 22, No. 7, 2007, pp. 974-981 2007 Movement Disorder Society Long-Term Cognitive Proﬁle and Incidence of Dementia After Selma Aybek, MD,1 Aline Gronchi-Perrin,1 Alexandre Berney, MD,2 Sabina Catalano Chiuve´,3 Jean-Guy Villemure, MD,4 Pierre R. Burkhard, MD,3 and Franc¸ois J.G.Vingerhoets, MD1* 1Service de Neurologie, CHUV, Lausanne, Switzerland2Service de Psychiatrie, CHUV, Lausanne, Switzerland 3Service de Neurologie, HUG, Gene`ve, Switzerland 4Service de Neurochirurgie, CHUV, Lausanne, Switzerland Abstract: An effect of subthalamic nucleus deep brain stimu-
operative differences between PDD and PD included older age lation (STN-DBS) on cognition has been suspected but long- (69.2 Ϯ 5.8 years; 62.6 Ϯ 8 years), presence of hallucinations term observations are lacking. The aim of this study was to and poorer executive score (10.1 Ϯ 5.9; 5.5 Ϯ 4.4). The evaluate the long-term cognitive proﬁle and the incidence of incidence of dementia over 3 years after STN-DBS is similar to dementia in a cohort of Parkinson’s disease (PD) patients the one reported in medically treated patients. The PDD pre- treated by STN-DBS. 57 consecutive patients were prospec- sented preoperative risk factors of developing dementia similar tively assessed by the mean of a neuropsychological battery to those described in medically treated patients. These obser- over 3 years after surgery. Dementia (DSM-IV) and UPDRS I vations suggest dementia being secondary to the natural evo- to IV were recorded. 24.5% of patients converted to dementia lution of PD rather than a direct effect of STN-DBS. 2007 over 3 years (incidence of 89 of 1,000 per year). This group of patients cognitively continuously worsened over 3 years up to Key words: dementia; subthalamic; DBS; Parkinson’s
fulﬁlling dementia criteria (PDD). The rest of the cohort re- mained cognitively stable (PD) over the whole follow-up. Pre- Subthalamic nucleus (STN) deep brain stimulation disability with an almost 6-fold increased risk when (DBS) for Parkinson’s disease (PD) has been validated: compared with normal controls.8 Prevalence and inci- STN deep brain stimulation (STN-DBS) provides good dence of dementia in surgically treated patients is un- motor outcome,1 and allows signiﬁcant reduction of an- known, as cognitive data on the long-term impact of tiparkinsonian medication.2 There has been much debate as to whether STN-DBS may cause adverse effects on In this prospective study, we examined the long-term cognition and behavior3-7 with suspicion of a negative evolution of cognition after STN-DBS, including the impact on cognition, particularly executive functions.
incidence of dementia, and we studied potential risk In medically treated PD, the prevalence of dementia is factors for postoperative cognitive decline.
now considered to be much higher than previously thought, reaching 60% after 10 to 15 years of motor We studied 57 (36 men, 21 women, age 63.8 Ϯ 8 years, PD duration 15.7 Ϯ 5 years) consecutive nonde- *Correspondence to: Francois Vingerhoets, Service de Neurologie, mented PD patients who underwent bilateral STN-DBS CHUV, Rue Bugnon 44, 1011 Lausanne, Switzerland.
and who potentially reached at least their two years follow-up. Inclusion criteria were the presence of PD Received 4 December 2006; Revised 20 February 2007; Accepted 23 following the United Kingdom Parkinson’s1 Disease So- Published online 18 April 2007 in Wiley InterScience (www.
ciety Brain Bank Criteria, with untreatable motor ﬂuc- interscience.wiley.com).
DOI: 10.1002/mds.21478
tuations and dyskinesia, without any sign atypical for PD *Use of different variant of the same tests at each evaluation (see at clinical examination and with at least 25% improve- 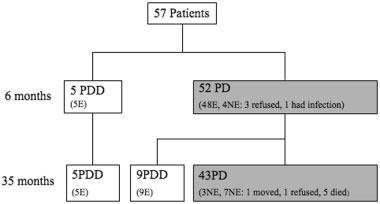 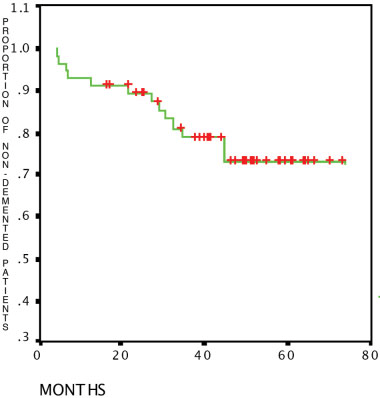 COGNITIVE PROFILE AND INCIDENCE OF DEMENTIA The 14 patients developing dementia worsened in allcognitive ﬁelds, signiﬁcantly for constructive praxis,ideomotor praxis, calculation, inverse digit span, mem-ory (particularly encoding). The rest of the cohortshowed only a signiﬁcant worsening for executive func-tions (inhibition) and inverse digit span.
Patients who developed dementia were similar to the rest of the cohort for gender, duration of PD, baselineUPDRS III, LED, psychiatric proﬁles (except hallucina-tions) and the preoperative cognitive evaluation exceptexecutive functions (Table 2). The two groups had sim-ilar evolution for anxiety (HARS), depression (MADRS)and motor outcomes (Table 3). Correct electrodes posi-tioning were conﬁrmed in the 12 patients who developeddementia and who were controlled by postoperative MRI(performed routinely since 2000). No persistent compli-cation occurred in either group. Transient complicationscomprised 4 confusions (1 in PDD, 3 in PD), one hypo-natremia and one acute paranoid state, both in PD.
At baseline, patients who subsequently developed de- Kaplan-Meier curve of the incidence of dementia. y-axis: mentia differed from the rest of the cohort only by an Proportion of PD without dementia; x-axis: Time course after the older age, presence of more hallucinations, and poorer operation (months). Each step down represents one patient who devel-oped dementia and each cross represents the time point of the last executive functions especially inhibition and initiation follow-up for each patient who did not develop dementia.
(Tables 2 and 3). However, there was important overlapsbetween PDD and PD groups for these scores preventing for inhibition, which signiﬁcantly worsened (3.2 Ϯ 2.7; them to be good preoperative predictors (Fig. 3). Even score combining these three risk factors did not reach Over the 28 Ϯ 14 months between the two postoper- 40% sensitivity for prediction of postoperative dementia.
ative follow-ups, the whole cohort had a worsening of We analyzed the risk proﬁle of the 5 patients who died inhibition, inverse digit span, memory (particularly rec- before the long-term neuropsychological testing; they were ognition), constructive praxis, and calculation (Table 1).
older (mean 68.6 years), none of them had hallucinations.
TABLE 2. Cognitive differences between PD and PDD at 6 mo and at 3 yr
aP Ͻ 0.05 between PD and PDD.
bP Ͻ 0.01 between PD and PDD.
cP Ͻ 0.05 compared to baseline.
Movement Disorders, Vol. 22, No. 7, 2007 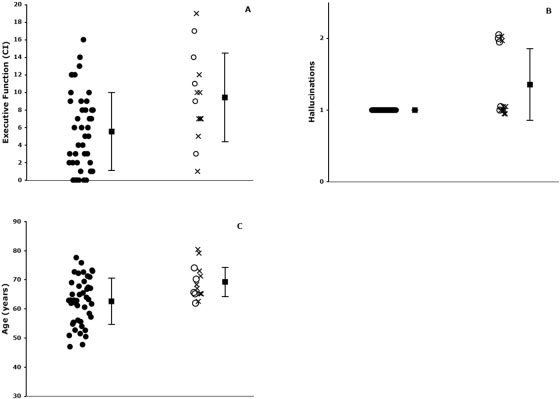 Correspondence Letters to the Editor must not exceed 400 words in length and may be subject to editing or abridgment. Letters must be limited to threeauthors and five references. They should not have tables or figures and should relate solely to an article published in Circulation withinthe preceding 12 weeks. Only some letters will be published. Authors of those selected for publication wil

Section 1: Why is This an Important Question Now? David KrausYale School of Forestry & Environmental StudiesYale School of Public Health The United States’ healthcare and conservation communities are undergoing massive transformations as new business models are developed in response to financial, political, and other pressures. Given the historical connections between access to natu