3 Drawing fire without acartoonist’s flak jacket HOW would I like to be an embedded cartoonist? Not one little bit. I believe passionately in the idea of cartoon reportage, but not at my age, and certainly not in the present circumstances with the military breathing down myneck.
Don’t get me wrong — I would love to hurl myself into foxholes and I really enjoyed the only time I have been paintballing. But I fear this would bepaintballing with extreme prejudice — and just imagine the indignity of beingat the beck and call of nuclear-powered wankers like Air Marshall BertrandBollocks or whatever his name is.
Would I care to be an embedded one? Not in the conditions during the invasion of Iraq. The Rumsfeld doctrine, as clearly expressed by the US DefenceSecretary during the Afghan war in late 2001, means that un-embeddedjournalists of any description can expect no protection from the forces offreedom.
There’s never been a more dangerous time to be a journalist at war.
If you don’t believe me then take a look at To Afghanistan and Back by the US cartoonist Ted Rall, an excellent little book that supplies a first hand accountof what really happened to journalists in that particular conflict.
And look at what they did to the Palestine Hotel. To hit the offices of al- Jazeera once in Kabul could be construed as carelessness; to blast them for asecond time in Baghdad seems like something other than misfortune.
So that leaves me back in my armchair, or seated at my desk, wading up to my metaphorical eyeballs through the swollen torrent of shit pouring out of myradio and TV.
PACIFIC JOURNALISM REVIEW 9 2003 19
One of the real advantages of being able to draw in this awful context is that it affords the chance to manipulate a little of this flood of imagery and turn it backon itself; since I’m certain the vast bulk of these mega-pictures constitute adeliberate campaign of obfuscation.
This explains the Western media’s strange combination of squeamishness and prurience. They don’t want the gory bits, thank you very much, but they areinexorably drawn towards them nonetheless. then they shut their eyes tight at thecrucial moment, for isn’t such explicit imagery both tasteless and intrusive?Surely that’s the bloody idea.
I might be a little more sympathetic to the Bush-Blair axis if they would at least own up to the effects of what they are actually doing out there. But theymanage the precise opposite: repeating blatant lies and shrouding their cam-paign of supposed (but impossible) surgical accuracy in a blanket of misinfor-mation.
For at the end of the day, no matter what your views on the legitimacy of this war, there is no escaping the grisly equation that high explosives plus denselypopulated areas equals civilian casualties.
Apart from the inevitable risk of seeming flippant and trivial in the face of tragedy and heroism, is it any more difficult working as a cartoonist now thanunder normal conditions? Personally speaking, there is no more ‘censorship’than usual.
The only thing I’ve been obliged to adapt slightly was the ‘turd count’ in my cartoon on the role of the UN, published on April 4 — I agreed to removethree splattered turds from the version that appeared in the printed edition of TheGuardian. The version on the web went unaltered.
The response to my war cartoons (which have made up my entire output during the last couple of months) has been interesting, particularly by email.
Since, by its very nature the web version ends up in all sorts of exotic, weird and wonderful places, I have almost become used to getting a steady supply,occasionally building to a flood of righteous abuse, from across the Atlantic.
But since the outbreak of hostilities, this seems to have eased and given way to a generally more positive electronic mailbag from the other side of the pond(if I discount the offers of porn, Viagra and Nigerian bank scams). However, I’mnot sure this means anything other than people of like mind wishing to sticktogether in times of trouble and strife.
Whatever happens I’m always very grateful for any response, though my frequent failure to reply may give the opposite impression. The web has also 20 PACIFIC JOURNALISM REVIEW 9 2003 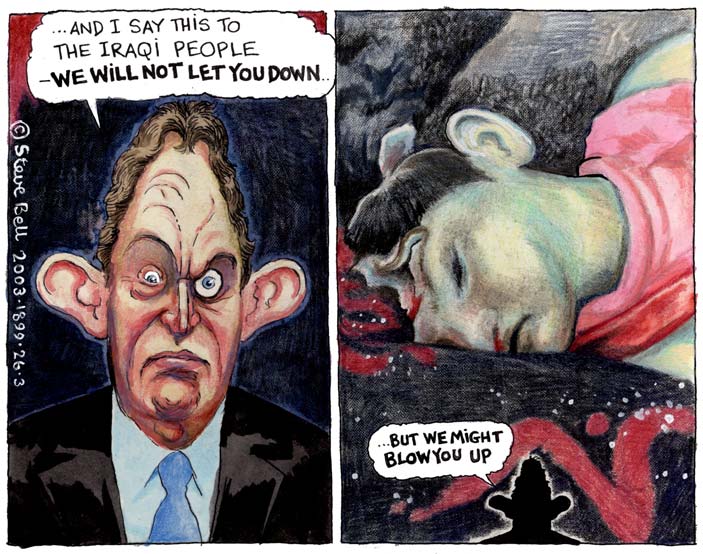 Copyright 2003: Steve Bell, The Guardian
been an invaluable source of information and imagery unavailable in any othermedium (I can’t get al-Jazeera on my cable account). I often wonder what Iwould do if I were ordered to pack up pen, paper, scanner and laptop and headfor the front — something which is technologically perfectly possible, butwhich I’ve only ever done in the less threatening context of a party conference.
I think after I’d been prised out of a wardrobe in which I would be trying to hide, I would endeavour to keep my head down and draw whatever came in frontof me. Which, if I really kept my head down, would be absolutely bugger all.
However, the great thing about drawing cartoons is that you can do it from memory. So, looking at it another way, if I were a military-type person and Icame across somebody in a flak jacket with CARTOONIST plastered across thefront, I’d have them shot or sent back home sooner than I could say ‘exercisingmy right of self-defence’.
Steve Bell is The Guardian’s cartoonist. This cartoon and article have beenpublished with his permission. www.guardian.co.uk PACIFIC JOURNALISM REVIEW 9 2003 21 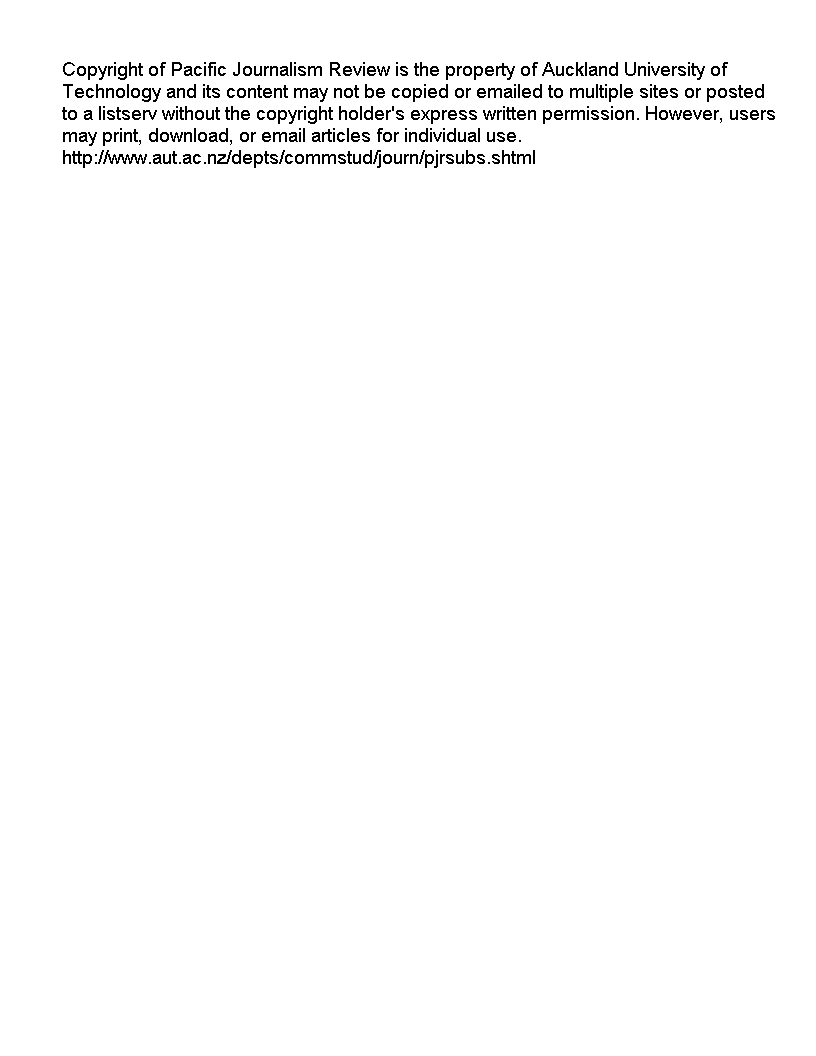