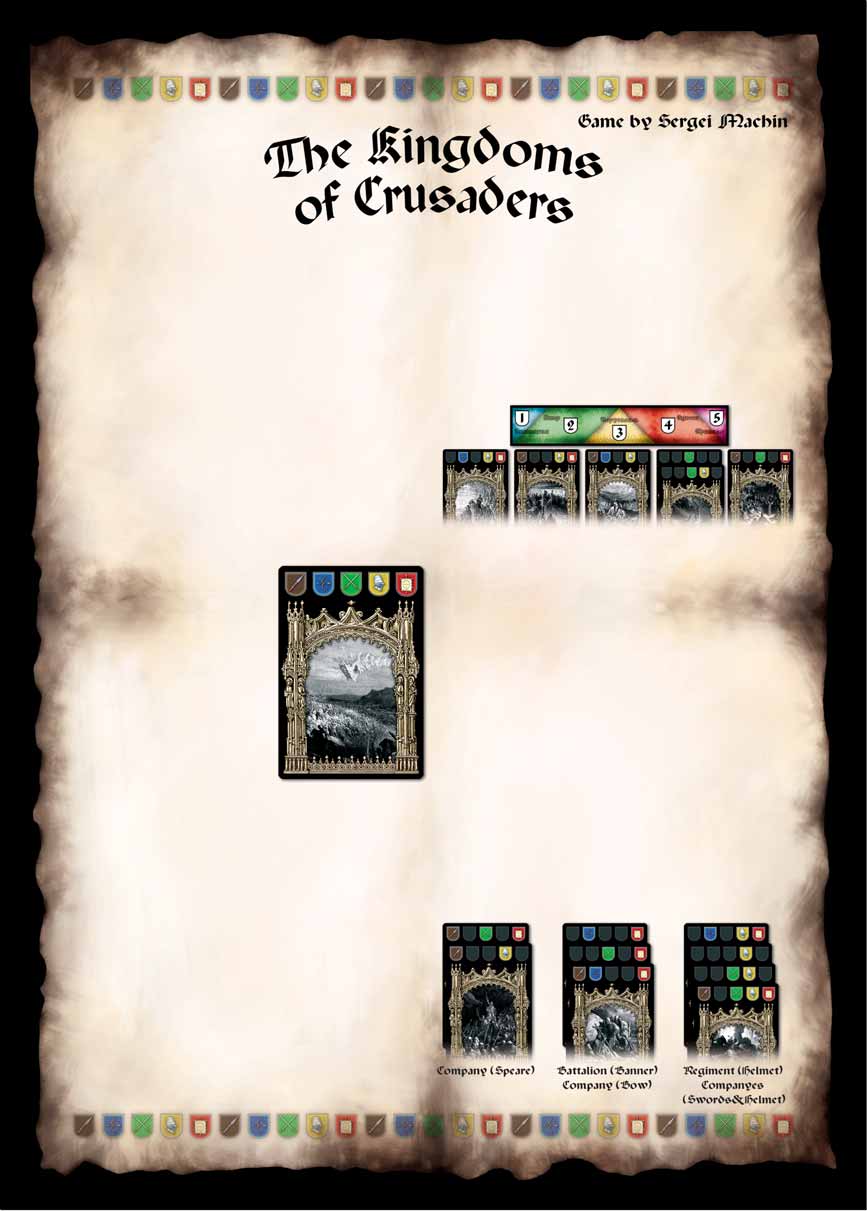 It was 1099 A.D. There were the fire of war and the steel of swords. The gates of Jerusalemburst open for the knights from the West and a new kingdom sprang up. Many of knights fullof fire and courage rushed to the Holy Land from behind the sea to gain glorious victoriesand new domains. They were fighting enemies and building fortresses, they made alliancesand began internal strives – all for worldly power and eternal glory. The «The Kingdoms of crusaders» game is dedicated toone of the most romantic periods of European history – theCrusades. During a game each player is trying to controlmore territories than his opponents by gathering more powerful armies.
Unit Cards:
Location card:
Each unit is represented in the game by a single card. The A Location card has five sectors those represent territories in dispute. Each sector has a name and a number. In a two players' game the players place their Location cards in the «mirror position»: sector 1 of the first player should be in front of sector 1 of the second player. In a three or four players' game the Location cards are placed with sector 1 at the left. The Location cards show the sectors where the players place their cards during a game. Each card must be placed correctly in one of the sectors.
shooting soldiers armed withbows, slings or crossbows.
Turn sequence:
The game consists of turns. Who moves first is determined hardy trained professional soldiers the followers of by random. After the first player finishes all his actions the player at the left hand gets turn and so on. – «Helmet» is the symbol of knights.
– «Banner» is the symbol of leaders of a crusade (the most 1 – Draw a card from the top of the deck 2 – Place one card from his hand to one of the sectors in The symbols are placed on the top of the cards according Preparation for a game:
Before each game you have to shuffle the deck thoroughly.
In a case of a three or four players' game you need two
decks mixed. In the beginning of the first turn each player
draws five cards from the top of the deck. Then each play
er places a location card in front of him. 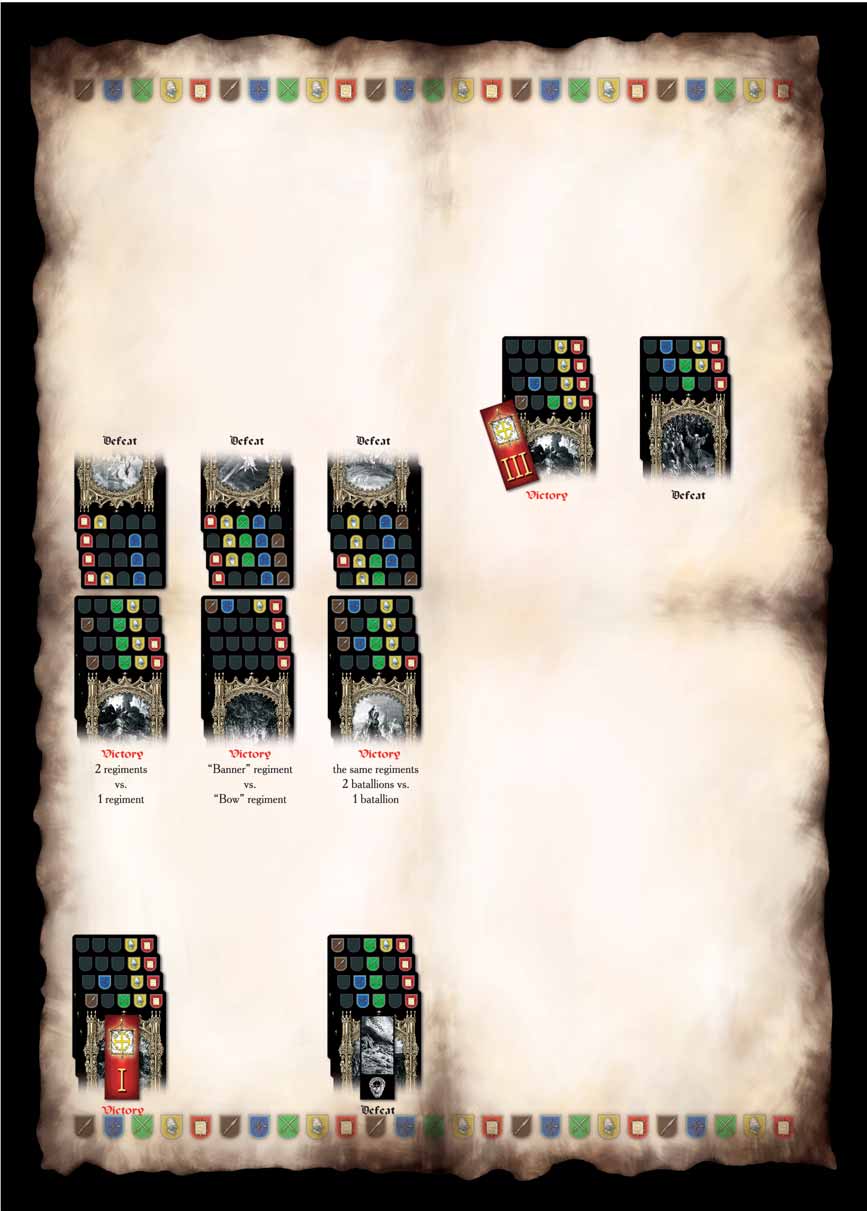 Players can place cards in any of the sectors in their so on. If necessary, the players compare quantity and qual Location cards. Each player's sector can contain no more than four cards. So during a game each player can play 20 If all squads in a territory are the same a player with the most powerful single symbol wins. If all single symbols arethe same the winner is a player who was the first to place Armies and domination in territories:
Four cards placed in a sector represent a player's army in A player who wins a territory places a «victory marker» in this territory. The symbols of the same kind on these cards his sector. If this is the first territory won in the game a represent the squads differing in power. Any army may marker number 1 is placed, if it's the second territory it consist of up to five squads of the following kinds: – a Company: two symbols of the same kind (the weakestsquad).
– a Battalion: three two symbols of the same kind.
– a Regiment: four two symbols of the same kind (themost powerful one).
If a player has completed his army in a territory and noother player can gather a better army there, this player winsthe territory immediately. Other players still can placecards in that territory. End of a game and a Winner:
A game ends when the last «victory marker» is placed. A
Winner is a player who's got more «victory markers» than
the others. If two or more players have the equal quantity
of «victory markers» the players whose numbers on the
«victory markers» are greater will lose.
Winner by the points:
Before a game players may choose the point system by
agreement. In this case each player gains victory points at
To determine who wins a territory you need to compare the end of game. If a player wins a territory he gains 3 armies in the sectors with the same numbers. points for each territory he wins. If a player has the second At first a player checks how many regiments in a territory army in a territory he gains 2 points for such a territory. If he's got; if one player has more regiments than the others a player has the third army in a territory he gains 1 points he wins that territory. If the quantity of regiments is the same a player with themost powerful regiment players have the samequantity of regiments ofthe same kinds then aplayer who possesses