Caffeine’s Effect on Appraisal and Mental Arithmetic Performance:
A Cognitive Modeling Approach Tells Us More
Sue E. Kase ([email protected]), Frank E. Ritter ([email protected])
College of Information Sciences and Technology, Pennsylvania State University Michael Schoelles ([email protected])
Cognitive Science Department, Rensselaer Polytechnic Institute Abstract
observations, self-reported appraisal, and performance data, we then developed a cognitive model in the ACT-R cognitive A human subject experiment was conducted to investigate caffeine’s effect on appraisal and performance of a mental architecture of the serial subtraction task. Parametric solution serial subtraction task. Serial subtraction performance data was sets resulting from optimizing the serial subtraction cognitive collected from three treatment groups: placebo, 200 mg model to data from three treatment groups (placebo, 200 mg, caffeine, and 400 mg caffeine. Data were analyzed by average 400 mg) and two task appraisal conditions (challenge and across treatment group and by challenge and threat task threat) provided the first cognitive modeling-derived insights appraisal conditions. A cognitive model of the serial subtraction task was developed and fit to the human performance data. How the model’s parameters change to fit the data suggest how cognition changes across treatments and due to appraisal. Overall, the cognitive modeling and optimization results This section begins with an overview of the human subject suggest that the speed of vocalization is changed the most along experiment where performance and task appraisal data were with some changes to declarative memory. This approach collected and later utilized in the development and promises to offer fine-grained knowledge about the effects of moderators on task performance. optimization of a cognitive model. A detailed description of the cognitive task follows, as well as, the formulation of the Keywords: Caffeine, stress, task appraisal, cognitive arithmetic
self-reported appraisal conditions. Lastly, results and interpretations of the human performance data are suggested. Introduction
As part of a larger project, human subject data was Caffeine is widely consumed throughout the world in collected to study the effects of stress and caffeine on beverages, foods, and as a drug for a variety of reasons, cardiovascular health. The authors collaborated with Dr. including its stimulant-like effects on mood and cognitive Laura Klein and her lab in the Biobehavioral Health performance (for review see Fredholm et al., 1999). Its Department at Penn State University. A mixed experimental positive effects on performance, notably sustained vigilance design was conducted with 45 healthy men 18-30 years of age and related cognitive functions, are well documented when (Klein, Whetzel, Bennett, Ritter, & Granger, 2006). (Men are administered to rested volunteers in doses equivalent to single typically used in these types of studies because we also took servings of beverages (Amendola et al., 1998; Smith et al., additional physiological measures and their systems are 1999). Additionally, its consumption in moderate doses is associated with few, if any, adverse effects (Nawrot et al., All subjects were asked to perform a series of three 2003). Therefore, caffeine has been a strategy examined for cognitive tasks. Subjects individually performed a simple its usefulness to military personnel (Lieberman & Tharion, reaction time (RT) and a working memory (WM) task taking 15 minutes to complete. Then subjects were administered one The majority of caffeine research is conducted through of three doses of caffeine: none (placebo), 200 mg caffeine human experimentation with analysis of the collected (equivalent to 1-2, 8 oz cups of coffee), or 400 mg caffeine performance data. Few studies have attempted to model the (equivalent to 3-4, 8 oz cups of coffee). After allowing effects of caffeine. One such study by Benitez et al. (2009) absorption time, a 20-minute stress session of the mental presented a biomathematical model for describing arithmetic portion of the TSST was performed. Following performance during extended wakefulness with the effect of completion of this stressor, subjects again were asked to complete the RT and WM tasks. Cognitive performance was Likewise, this study takes a modeling approach employing determined by calculating accuracy and response time scores. cognitive modeling and optimization techniques to investigate This paper focuses on one portion of the experiment—the the effects of caffeine on cognitive performance. In particular, TSST. The TSST protocol has been used for investigating we examined the effects of caffeine and task appraisal during psychobiological stress responses in a laboratory setting since the arithmetic portion of the Trier Social Stress Test (TSST), the 1960s (Kirschbaum, Pirke, & Hellhammer, 1993). TSST a mental serial subtraction task. Based on human subject traditionally consists of an anticipation period and a test 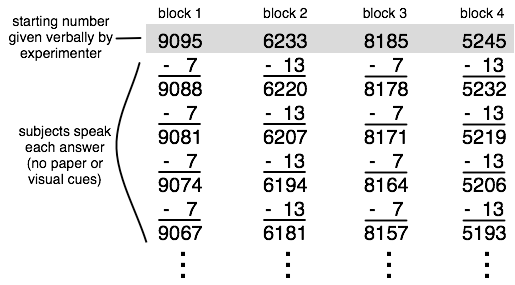 period in which subjects have to deliver a free speech and resources or reserves to deal with the serial subtraction task perform mental arithmetic in front of an audience. The mental and three focused on the subject’s perception as to how arithmetic portion of the TSST is a mental serial subtraction For all questions the scale was from 1 to 5 with a value of 3 indicating that the subject is neither challenged nor threatened Serial Subtraction Task
by the task. After correcting for the imbalance in questions, a The serial subtraction task utilized in the experiment ratio of perceived stress to perceived coping resources was consisted of four 4-minute blocks of mentally subtracting by created. For example, if a subject’s total appraisal score was 7s and 13s from 4-digit starting numbers. Figure 1 illustrates 1.5 or less, their perceived stress was less than or equal to the serial subtraction task. These were the four starting their perceived ability to cope, which equated to a challenge numbers used to begin the four blocks of subtraction during condition. If a subject’s appraisal score was greater than 1.5, their perceived stress was greater than their perceived ability to cope, which equated to a threat condition. Each treatment group was composed of 15 subjects. The placebo group had approximately the same number of subjects in each appraisal condition (7 challenge, 8 threat). The 200 mg caffeine group had twice as many challenged subjects as threatened subjects (10 challenge, 5 threat). The 400 mg caffeine group contained only 2 challenged subjects with the remainder (13) subjects reporting a threatening appraisal. Results and Discussion
For this investigation, the serial subtraction performance data from the placebo group (PLAC), the 200 mg caffeine group Figure 1: An illustration of the four blocks of the serial (LoCAF), and the 400 mg caffeine group (HiCAF), were analyzed by average across treatment group and by appraisal condition. The performance statistics of primary interest were number of attempted subtraction problems and a percentage Before the task begins the experimenter explains that the correct score. The data are shown in Table 1 where each pair subject’s performance is going to be voice recorded and of values represents number of attempts and percent correct. reviewed by a panel of psychologists for comparison with the The results discussed in this paper apply to data from the first other subjects participating in the experiment. The task is performed mentally with no visual or paper clues. After the task is explained to the subject, a task appraisal questionnaire Table 1: Human performance (average number of attempts is completed, and the subject begins performing the task. It is and percent correct) by treatment group (each N=15) and thought that this anticipation period, for some subjects, appraisal condition (challenge, threat). increases anxiety and worry about poor performance on the Subjects sit in a chair directly in front and near the experimenter who is holding a time keeping device and clipboard of the correct subtraction answers that she checks off as the subject performs the task. Before the task begins the experimenter emphasizes that the task should be preformed as quickly and as accurately as possible. An experimenter tells the subject the starting number; from then on, the subject For all treatment groups the challenge condition showed the speaks the answer to each subtraction problem. When an best performance in both number of attempts and percent incorrect answer was given, the subject was told to “Start correct over the average across treatment and the threat over at <the last correct number>”. At two minutes into each condition. The threat condition showed the worst 4-minute session, subjects were told that “two minutes performance. Performance differences between the challenge remain, you need to go faster”. This prompt enhances the and threat conditions were most pronounced in the LoCAF group with an impressive increase of nearly 25 more attempted subtraction problems and a 13.5% increase in Task Appraisal
subtraction accuracy by challenged subjects over threatened Before and after the serial subtraction stress session, subjects subjects. For the HiCAF group the challenge and threat completed pre- and post-task appraisals based on Lazarus and condition differences were less than LoCAF but still Folkman’s (1984) theory of stress and coping. Each subject substantial: 13 more attempted problems and a 7.7% increase was asked five questions orally: two focused on the subject’s in subtraction accuracy. Differences between the challenge