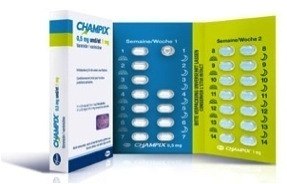 PROFESSIONAL BRIEFING CHAMPIX® (VARENICLINE TARTRATE) 1. What is Champix?
Varenicline’s trade name is ‘Champix’ in the UK and Europe. It is the newest medicine licensed to help people over the age of 18 to stop smoking (licensed in the UK in 2006). Champix is a nicotine receptor partial agonist. It partially mimics the effect of nicotine in stimulating a moderate release of dopamine in the brain, but also prevents nicotine from binding to the receptors in the brain. It therefore reduces the cravings to smoke, helps relieve withdrawal symptoms and blocks the pleasurable aspect of smoking. Clients may still feel some urges to smoke and will have to put effort into staying off cigarettes, but will find that smoking is less enjoyable if they have a ‘slip’. Champix is known as a ‘black triangle drug’. This means that any additional side-effects that are noted by a client must be made known to the manufacturers (see section 4). 2. Who can prescribe Champix?
Champix should be a first line treatment and should be offered to smokers as one of the options available, along with Nicotine Replacement Therapy(NRT) and bupropion, to help them stop smoking1. Champix must be prescribed as a part of a programme of behavioural support and, with the exception of nurse prescribers, must be signed off by the client’s GP to generate a prescription.To obtain Champix after the first appointment with a stop smoking advisor, the advisor will make a request to the client’s GP to authorise the dispensing of the drug and to check suitability after a full assessment of each individual. Clients should see the stop smoking advisor at least every 2 weeks during the course of treatment, to discuss progress and collect further requests for treatment. It is important to ensure there is a constant supply of Champix within the body, as days without taking the drug may result in the course having to be started again. A pharmacy pilot will run from January to March 2013 in Islington. Chemitex pharmacy will be able to prescribe Champix without the client having to see their GP. Clients must be registered with an Islington GP to use this service and must be seen in person at the pharmacy once a week for 12 weeks. Clients should be referred to the pharmacy directly. Contact details are: Chemitex 332 Hornsey Road, N7 7HE, Tel: 020 7272 4869. 3. Prescribing Guidance
The main guidelines for taking Champix are as follows: The course of treatment is for 12 weeks, with the possibility of a further extension at the GP’s discretion. Islington NHS Stop Smoking Service | 0800 093 9030 | January 2013 Update | Replaces previous version | Page 1 of 4

PROFESSIONAL BRIEFING CHAMPIX® (VARENICLINE TARTRATE) For the first 3 days take one white 0.5mg tablet daily. On days 4 -7 take one white 0.5 mg tablet twice daily. Following this take one blue 1mg tablet twice daily for the rest of the course. Clients can continue to smoke for the first 1-2 weeks during which time the tablets start to work. Following the first week of smoking while taking Champix, the client must set a quit date during the second week. Clients must not drive or operate machinery within a 30 minute period of taking the tablet until they know how it affects them, as light-headedness, dizziness or sleepiness are possible side effects. Tablets can be taken with or without food and should be taken with water. Tablets must be taken 8 hours apart and should not be consumed after 8pm as some patients may experience a disturbed sleep pattern. 4. Side Effects and Contraindications
The main side effect of Champix is nausea. Common side effects are headache, difficulty sleeping and abnormal dreams. Other possible side effects are light-headedness, dizziness, sleepiness, changes in bowel habits, indigestion, flatulence, vomiting, increased appetite and slight decrease in mood. For a complete list of side effects see the patient information leaflet. Tablets can be consumed after food to avoid nausea. If the client says they are feeling very sick when taking the drug please ensure they are taking it with food. If they continue to feel sick they should discuss it with their GP (or pharmacist) who will advise if the dose can be tapered. Champix is not suitable for clients under the age of 18, pregnant or breastfeeding women and people with severe renal impairment. In patients with mild to moderate renal impairment the dosage may need to be adjusted. Clients who are hypersensitive to any of the ingredients should not take Champix. If clients experience any unwanted side effects they must contact their GP. Healthcare professionals and patients are encouraged to report any side effects thought to be associated with Champix via the Yellow Card Scheme (by calling the hotline on freephone 0808 100 3352, online at http://yellowcard.mhra.gov.uk/ or by completing a Yellow Card form available from a pharmacist or GP). 5. Commonly asked questions and answers
Is Champix a Nicotine Replacement Therapy (NRT)?
Is Champix an anti-depressant?
No, Champix is not an anti-depressant. It was developed specifically to help smokers quit.
Islington NHS Stop Smoking Service | 0800 093 9030 | January 2013 Update | Replaces previous version | Page 2 of 4

PROFESSIONAL BRIEFING CHAMPIX® (VARENICLINE TARTRATE) Which is better, Champix or NRT?
Both are very successful but work in a different way. NICE guidance reports that the quit rate
is higher with Champix overall, compared to NRT or bupropion2. Champix was also shown to
be equally effective in those with and without mental illness3.However, it is important to
consider what treatment is more suited to the client’s quit attempt based on individual
circumstances.
Can Champix be combined with other stop smoking treatments?
No, Champix should not be taken in combination with other stop smoking treatments, as the
safety and effectiveness of doing so has not been studied.
Will Champix affect medicationsfor other medical problems?
There are no known drug interactions withChampix. Due to the physiological changes caused
by smoking cessation with or without stop smoking treatments, the dosage of some
medications, including psychiatric medications4, may need to be adjusted by the client’s GP.
Does Champix cause depression and suicidal thoughts?
There has been some publicity about Champix being linked to depression or suicidal thoughts.
However, there is no conclusive evidence that Champix causes changes in mood or other
neuropsychiatric symptoms.
Patients with active psychiatric illness were excluded from pre-marketing clinical trials of Champixand the safety and efficacy of Varenicline in such patients has not been established5. In 2008, the Medicines and Healthcare products Regulatory Agency(MHRA) advised that ‘care should be taken when prescribing Varenicline to patients who have history of psychiatric illness’5. More recent studies found no evidence that Champix was associated with increased risk of suicide, depression or suicidal thoughts compared to NRT (for example see Gunnell et al. 20096). Depressed mood can result from nicotine withdrawal when stopping smoking with or without treatment. Patients with a history of psychiatric illness should be followed up by their GP during a stop smoking attempt and monitored for mood and behaviour changes7. If patients or their family and caregivers are concerned about changes in mood, behaviour or suicidal thoughts, Champix should be discontinued immediately and clients should contacttheir GP5. What will happen when clients stop taking Champix?
In most cases, the client will be a non-smoker at the end of the treatment period, so will notice
no difference compared to when they were taking Champix.
In some cases an additional 12 weeks of treatment may be considered to reduce the chances
of relapse.
In a small percentage of clients (3%) discontinuing the medication at the end of the treatment
period has been associated with irritability, an urge to smoke, depression and/or insomnia.
Tapering the dose may be considered to minimise these unwanted effects.
If a client continues to smoke beyond the recommended time frame of 7-14 days, then
Champix may not take effect. Also, in order for Champix to work effectively, clients must
complete the 12 week course. This greatly reduces the chances of starting to smoke again in
the future.
Islington NHS Stop Smoking Service | 0800 093 9030 | January 2013 Update | Replaces previous version | Page 3 of 4