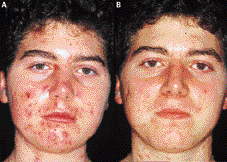 Sublingual therapy for cobalamindeficiency as an alternative to oraland parenteral cobalaminsupplementation Georges Delpre, Pinhas Stark, Yaron Niv Effectiveness of sublingual cobalamin-replacement therapy wasstudied in 18 people with cobalamin deficiency. Administrationwas efficacious and convenient, and compliance was high.
The traditional treatment of cobalamin (vitamin B ) deficiency, including pernicious anaemia, food-cobalaminmalabsorption in the elderly, vegetarianism, and otherdeficiency states, is by intramuscular injections.1 However,several drawbacks are attributed to this route of Patient before treatment (A) and after 18 months of low-dose administration, commonly resulting in discontinuation of therapy. Injections can be painful, are difficult in patients The patient gave his permission for publication of these photographs.
who have a tendency to bleed or who are very thin, aredifficult to provide for patients who are elderly or disabled,and are costly if given by health professionals.1,2 Oral and acne fulminans, a severe variant of acne accompanied by cobalamin-replacement therapy has, however, proved systemic inflammatory symptoms. The 15-year-old had a 3-month history of deteriorating acne (figure A). Neither Additionally, oral therapy is not efficient in patients with systemic minocycline nor systemic isotretinoin controlled the diarrhoea, vomiting, or who are otherwise unable to take or disease. He suddenly developed fever, leucocytosis, a raised erythrocyte sedimentation rate, and arthralgias. Although In a prospective open-labelled study, we treated 18 serum concentrations of testosterone, leutenising hormone, consecutive patients with cobalamin deficiency of various and follicle stimulating hormone were within normal limits, causes with sublingual cobalamin preparation, and assessed concentrations of androstenedione, dehydroepiandrosterone, the efficacy of treatment. Cobalamin deficiency was defined and 17-hydroxyprogesterone (17-OHP) were raised. There as serum cobalamin concentration less than 200 pg/mL was also an abnormal increase of 17-OHP in response to (normal concentration 200–900 pg/mL), shown by two ACTH-stimulation. These results suggested late-onset consecutive tests. Ten men and eight women were enrolled.
congenital adrenal hyperplasia (adrenogenital syndrome).
The mean age was 48·1 years (range 23–80). Five patients He was given, in addition to isotretinoin, a short course oforal methylprednisolone (initial dose 1 mg/kg body weight had pernicious anaemia, seven were vegetarians, and two per day) and improved strikingly. After discontinuation of had Crohn’s disease (ileitis). Four patients, all male, were isotretinoin and on low dose methylprednisolone his long-term blood donors. No patient was anaemic. We gave condition has remained stable with only mild acne, but no patients sublingual nuggets of 1000 ␮g cobalamin (Solgar major flare up for 18 months (figure B).
Laboratories, Leonia, NJ, USA). Cobalamin is isolated from Exogenous androgens have also been documented as a yeast fermentation medium, which provides a product that is trigger for acne fulminans.2 In women or prepubertal children with severe acne disorders of androgen metabolism On the basis of preliminary results (data unpublished) two are routinely considered and are extensively dealt with in the sublingual nuggets of cobalamin (total daily dose of literature (reviewed in ref 3). Androgen excess in men with 2000 ␮g), were given for 7–12 days, after informed consent severe acne has been much less studied, and there may be a was obtained. To ensure full compliance and complete tendency to underestimate its relevance in clinical practice.
absorption of the drug, we asked patients to drink a glass of Men with persistent acne had significantly higher serum water to avoid mouth dryness, and then to hold nuggets levels of androgens than a group of aged-matched normal under their tongue, until completely dissolved, 30 min and excess androgens of adrenal origin were before breakfast. We measured serum cobalamin commonly found in men with severe acne.5 The frequency concentrations before therapy and 2 days after completion of and importance of androgen excess for the variable the loading phase. Although all patients followed the phenotype of male acne patients warrants further instructions, three patients took the drug for 12–14 days, and one patient continued to take the drug for 28 days by hisown decision.
Plewig G, Kligman AM. Acne and rosacea. Berlin: Springer, 1993.
The mean serum cobalamin concentration before Traupe H, von Muhlendahl KE, Bramswig J, Happle R. Acne of thefulminans type following testosterone therapy in three excessively tall treatment was 127·9 pg/mL (SD 42·6). Normalisation of boys. Arch Dermatol 1988; 124: 414–17.
serum cobalamin concentration was seen in all patients Lucky AW. Hormonal correlates of acne and hirsutism. Am J Med (figure). The mean serum cobalamin concentration after 1995; 98 (suppl 1A): 89S–94S.
completion of the short-term loading phase was 515·7 Ramsay B, Alaghband Zadeh J, Carter G, Wheeoler MJ, Cream JJ.
pg/mL (235·0). An increase in cobalamin concentration as raised serum 11-deoxycortisol in men with persistent acne vulgaris.
Clin Endocrinol Oxf 1995; 43: 305–10.
much as four-fold compared with pretreatment Marynick SP, Chakmakjian ZH, McCaffree DL, Herndon JH.
concentration was seen in most patients. In a few patients, Androgen excess in cystic acne. N Engl J Med 1983; 308: 981–86.
higher increase in cobalamin concentrations was achieved.
Department of Dermatology (M Placzek MD, K Degitz MD, The mean change in serum cobalamin concentration of Prof G Plewig MD) and Paediatrics (H Schmidt MD), 387·7 pg/mL (215) was significant (p=0·0001 in Student’s t Ludwig-Maximilians-University, 80337 München, Germany test). No patient had side-effects. All participants found the method of administration convenient and preferred it to (e-mail: [email protected]) THE LANCET • Vol 354 • August 28, 1999 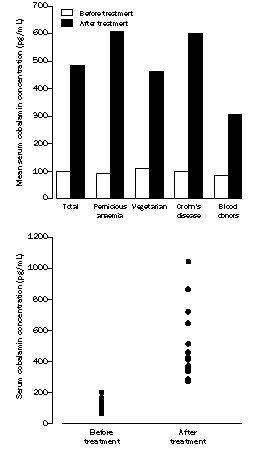 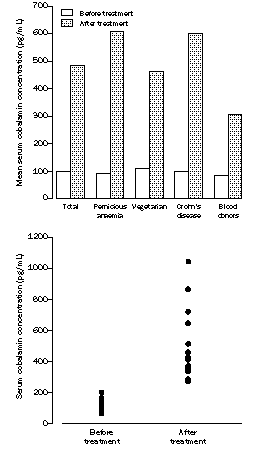 Decrease of vancomycin-resistantenterococci in poultry meat afteravoparcin ban Annalisa Pantosti, Maria Del Grosso, Silvia Tagliabue,Agostino Macrì, Alfredo Caprioli In Italy, 18 months after the ban of avoparcin, the percentage
of poultry meat samples containing vanA
vancomycin-resistant enterococci fell from 14·6% to 8%.
Avoparcin was used as a growth promoter in food animals inmost European countries, including Italy, until April, 1997,when the EU banned its use because there was increasingresistance in enterococci, isolated from both animals andhuman beings, to vancomycin. Avoparcin has cross-resistance with vancomycin, and therefore in the gut ofanimals this antibiotic can select for high-level vancomycin-resistant enterococci (VRE) carrying the transposon bornevanA gene, which can be transferred to other bacteria.1 VREare detected in the faeces of animals in farms usingavoparcin, but not in farms not using avoparcin,2 nor infarms in the USA where avoparcin has never been authorisedfor use in animals.3 Moreover, VRE can be found inuncooked food of animal origin, especially chickens, inEurope, but not in the USA.2,3 Although the risk of transmission of animal VRE to human beings via the food chain has not been preciselymeasured, the effect of the vaoparcin ban on the prevalenceof VRE in animal-derived uncooked food can beevaluated.With this aim a study was carried out in Italy withthe support of the Italian Ministry of Health. We examinedraw poultry samples (whole carcasses and poultry cuts)obtained from food processing plants in two separatesurveys: before the avoparcin ban (March, 1997) and 18months afterwards (October, 1998). The samples werecollected throughout 1 month in each survey by staff of threeRegional Veterinary Laboratories (Istituti ZooprofilatticiSpermentali) in north and central Italy. VRE were isolatedafter enrichment in vancomycin-containing media (6 mg/L).
PCR was used to detect the vanA resistance gene and toconfirm the identification of the species Enterococcus faecium.4 There was a lower prevalence of VRE harbouring the vanA gene in the samples collected 18 months after the banof avoparcin: the percentage of samples containing VRE fellfrom 14·6% (49/334) to 8% (22/271, p=0·012). In both Distribution of cases by cobalamin deficiency state (top) and surveys, several vanA-positive enterococcal species were serum cobalamin concentrations before and after sublingual found, including E faecium, E faecalis, E durans, and E hirae. E faecium was the most common species: its prevalence We conclude that sublingual cobalamin is an effective, decreased from 9·3% of the samples in the first survey, to 7% safe, and convenient treatment, which provides rapid in the second survey, but the difference was not statistically restoration of serum cobalamin concentrations and should be considered as an alternative method of administration.
Although further study is necessary to confirm a trend, our findings suggest that several months after the avoparcin ban, Lederle FA. Oral cobalamin for pernicious anaemia: medicine’s best there is a moderate reduction in VRE contamination of kept secret? JAMA 1991; 265: 94–95.
Elia M. Oral or parenteral therapy for B12 deficiency. Lancet 1998; poultry products and the consumer is less likely to come 352: 1721–22.
across vancomycin-resistant enterococci bearing the Verhaeverbeke I, Mets T, Mulkens K, Vandewoude M. Normalization potentially transferable vanA gene. After the ban of of low vitamin B12 serum levels in older people by oral treatment.
tetracyclines as growth promoters in 1971, Smith did not J Am Geriatr Soc 1997; 45: 124–25.
Murray MT. Benefits of vitamin B12. Am J Nat Med 1996; 3: 10–15.
find a reduction in the frequency of tetracycline-resistant Kuzminski AM, Del Giacco EJ, Allen RH, Stabler SP, Lindenbaum J.
Escherichia coli in pigs.5 However, tetracyclines were and still Effective treatment of cobalamin deficiency with oral cobalamin. Blood are largely used as therapeutic medicines in the animal 1998; 92: 1191–98.
industry, whereas there is no similar use for avoparcin or Department of Gastroenterology (G Delpre MD, Y Niv MD) and Institute of Haematology (P Stark MD), Rabin Medical Centre,Beilinson Campus, Petah Tiqva, and Sackler Faculty of Medicine, Woodford N, Johnson AP, Morrison D, Speller DCE. Current Tel Aviv University, Tel Aviv, Israel (G Delpre, Y Niv, P Stark) perspectives on glycopeptide resistance. Clin Microbiol Rev 1995; 8:
585–615.
Correspondence to: Dr Georges Delpre, Department of Klare I, Heier H, Claus H, Reissbrodt R, Witte W. vanA-mediated Gastroenterology, Rabin Medical Centre, Beilinson Campus, Petah high-level glycopeptide resistance in Enterococcus faecium from animal husbandry. FEMS Microbiol Lett 1995; 125: 165–72.
THE LANCET • Vol 354 • August 28, 1999

“The Quantitative analysis of Uranium Isotopes in the population of PortHope, Ontario Canada” authored by Durakovic, Gerdes, and Zimmerman Prepared for the Municipality of Port HopeProgram in Occupational Health and Environmental MedicineThe Departments of Family Medicine and Public Health Sciences Executive Summary This review of the document entitled “The Quantitative analysis of Ur