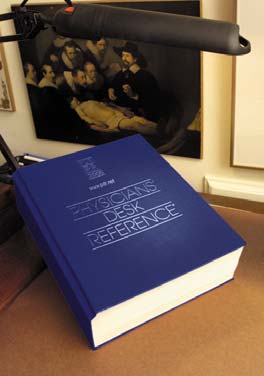 As listed in the Physicians’ Desk Reference (PDR)

IMMUNOCAL®
PDR® 2008
NUTRACEUTICAL
(Bonded cysteine supplement) glutathione precursor
Powder Sachets
DESCRIPTION and CLINICAL PHARMACOLOGY
IMMUNOCAL® is a U.S. patented natural food protein concentrate in the FDA category of GRAS (generally recognized as safe) which assists the body in maintaining optimal concentrations of glutathione (GSH) by supplying the precursors required for intracellular glutathione synthesis. It is clinically proven to raise glutathione values. Glutathione is a tripeptide made intracellularly from its constituent amino acids L-glutamate, L-cysteine and glycine. The sulfhydryl (thiol) group (SH) of cysteine is responsible for the biological activity of glutathione. Provision of this amino acid is the rate-limiting factor in glutathione synthesis by the cells since cysteine is relatively rare in foodstuffs. Immunocal® is a bovine whey protein isolate specially prepared so as to provide a rich source of bioavailable cysteine. Immunocal® can thus be viewed as a cysteine delivery system. The disulphide bond in cystine is pepsin and trypsin resistant but may be split by heat, low pH or mechanical stress releasing free cysteine. When subject to heat or shearing forces (inherent in most extraction processes), the fragile disulfide bonds within the peptides are broken and the bioavailablility of cysteine is greatly diminished. Glutathione is a tightly regulated intracellular constituent and is limited in its production by negative feedback inhibition of its own synthesis through the enzyme gamma-glutamylcysteine synthetase, thus greatly minimizing any possibility of overdosage. Glutathione has multiple functions: 1. It is the major endogenous antioxidant produced by the cells, participating directly in the neutralization of free radicals and reactive oxygen compounds, as well as maintaining exogenous antioxidants such as vitamins C and E in their reduced (active) forms. 2. Through direct conjugation, it detoxifies many xenobiotics (foreign compounds) and carcinogens, both organic and inorganic. 3. It is essential for the immune system to exert its full potential, e.g. (1) modulating antigen presentation to lymphocytes, thereby influencing cytokine production and type of response (cellular or humoral) that develops, (2) enhancing proliferation of lymphocytes thereby increasing magnitude of response, (3) enhancing killing activity of cytotoxic T cells and NK cells, and (4) regulating apoptosis, thereby maintaining control of the immune response. 4. It plays a fundamental role in numerous metabolic and biochemical reactions such as DNA synthesis and repair, protein synthesis, prostaglandin synthesis, amino acid transport and enzyme activation. Thus, every system in the body can be affected by the state of the glutathione system, especially the immune system, the nervous system, the gastrointestinal system and the lungs.
INDICATIONS AND USAGE
IMMUNOCAL® is a natural food supplement and as such is limited from stating medical claims per se. Statements have not been evaluated by the FDA. As such, this product is thus not intended to diagnose, cure, prevent or treat any disease.
Glutathione augmentation is a strategy developed to address states of glutathione deficiency, high oxidative stress, immune deficiency, and
xenobiotic overload in which glutathione plays a part in the detoxification of the xenobiotic in question. Glutathione deficiency states include,
but are not limited to: HIV/AIDS, infectious hepatitis, certain types of cancers, cataracts, Alzheimer’s Disease, Parkinsons, chronic obstructive
pulmonary disease, asthma, radiation, poisoning by acetaminophen and related agents, malnutritive states, arduous physical stress, aging, and
has been associated with sub-optimal immune response. Many clinical pathologies are associated with oxidative stress and are elaborated upon
in numerous medical references.
Low glutathione is also strongly implicated in wasting and negative nitrogen balance, notably as seen in cancer, AIDS, sepsis, trauma, burns
and even athletic overtraining. Cysteine supplementation can oppose this process and in AIDS, for example, result in improved survival rates.
CONTRAINDICATIONS
IMMUNOCAL® is contraindicated in individuals who develop or have known hypersensitivity to specific milk proteins.
PRECAUTIONS
Each sachet of IMMUNOCAL® contains nine grams of protein. Patients on a protein-restricted diet need to take this into account when
calculating their daily protein load. Although a bovine milk derivative, IMMUNOCAL® contains less than 1% lactose and therefore is generally
well tolerated by lactose-intolerant individuals.
WARNINGS
Patients undergoing immunosuppressive therapy should discuss the use of this product with their health professional.

OVERDOSAGE
Overdosing on IMMUNOCAL® has not been reported.

DOSAGE AND ADMINISTRATION
For mild to moderate health challenges, 20 grams per day is recommended. Clinical trials in patients with AIDS, COPD, cancer and chronic
fatigue syndrome have used 30-40 grams per day without ill effect. IMMUNOCAL® is best administered on an empty stomach or with a light
meal. Concomitant intake of another high protein load may adversely affect absorption.

RECONSTITUTION
IMMUNOCAL® is a dehydrated powdered protein isolate. It must be appropriately rehydrated before use. Remains bioactive up to 12 hours
after mixing. DO NOT heat or use a hot liquid to rehydrate the product. DO NOT use a high-speed blender for reconstitution. These methods
will decrease the activity of the product.
Proper mixing is imperative. Consult instructions included in packaging.
HOW SUPPLIED
10 grams of bovine milk protein isolate powder per sachet.
30 sachets per box.

STORAGE
Store in a cool dry environment. Refrigeration is not necessary.