Thin-Layer and Column
Chromatography: Identifying an
Unknown Analgesic, Determining an
combination of different solvents, allows Ideal Mobile Phase and Monitoring
for the possibility of an infinite range of the Progress of the Mitsunobu
Reaction.
solvents will result in a wider variety of polarities. The choice of mobile phase is Nazareth College of Rochester, 4245 East Ave, solvent front and likewise if the solvent remain too close to the origin. In either analgesics using thin-layer scenario, separation is poor. The ideal chromatography (TLC). The ideal the stationary phase consists of silica or In most chromatography chromatography is advantageous. The chromatography experiment is also silica polarity remains constant throughout the experiment. The term absorbent is suffice, some separations require ratios cm to spare and the height of the column should be at least ten times its diameter.
1 Lehman J.W. Operational Organic Chemistry. A Problem-Solving Approach to the Laboratory Course, Third ed; Prentice Hall: Upper Saddle

the movement of the solvent front 2.
does not need to reach any specific point before it is removed from the developing chamber. Rf values ensure the ability to different distances up the plate they must different plate, assuming that the mobile phase used remained constant for all the acid. The spot for the unknown was view
under a UV lamp to be between the spots
of aspirin and acetaminophen 1. We
knew that the analgesic could not be
acetaminophen because acetaminophen
is too weak to react with HCl of the
aqueous layer in the extraction
mee concluded,
TLC plates are given in Table 1. There
is a difference of 0.066 between the Rf
value for the unknown and the Rf value
for acetaminophen, and there is a -0.077 difference between the Rf values of the 4 Knoerzer, T. Fall Organic Chemistry Exp. #3. http://www.pub.naz.edu:9000/~organic/fall/fallor 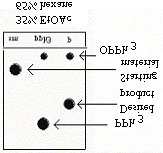 for identification, even though we know the unknown is not acetaminophen. acetaminophen should be spotted on another TLC plate using a solvent that is not as polar as the mobile phase. A slightly less polar solvent would move the spots towards the middle of the plate, away from the solvent front and hopefully yield more distinct Rf values. Azacycles, part of a reaction was found to contain 77% of the desired product by “chroma 5 Occiato, E.G.; Prandi, C.; Ferrali, A.; Guarna,
A.; Deagostino, A.; Venturello, P. J. Org.
Chem.2002, Vol. 67, No. 20, 7144-7145.
Monitoring the progress of a reaction is collecting ten fractions, the first, fifth fraction contained a faint spot while the phases consisting of different quantities along with a faint impurity spot. The ten 4. The ideal mobile phase is somewhere
Experimental Section
halfway up the plate. The lower spots in Identification of aspirin. To separate
reactant mixture is not pure 3. However,
unknown, salacyimide, aspirin, caffeine, because there is no starting material or Determination of the ideal mobile
polar and the spots moved too far up the phase in order to monitor the progress
of the Mitsunobu reactoin. The mobile
solvent was very non-polar and the spots Column chromatography. To a buret
testing or reactions. The desired product of the Mitsunobu reaction, was separated using a 1:9 ethyl acetate: hexane mobile flashed with nitrogen. Ten fractions were collected and the first, fifth and tenth fractions were tested using TLC with a
35% ethyl acetate, 65% hexane mobile
phase.

NATIONAL AQUATIC NUISANCE SPECIES TASK FORCE PWSRCAC holds a voting seat on the Western Regional Panel of the National Aquatic Nuisance Species Task Force. The Panel is made up of representatives of state, local and British Columbia governments as well as natives and various interest and industry groups throughout the West Coast. Our agreement with the U.S. Fish & Wildlife Service includes f