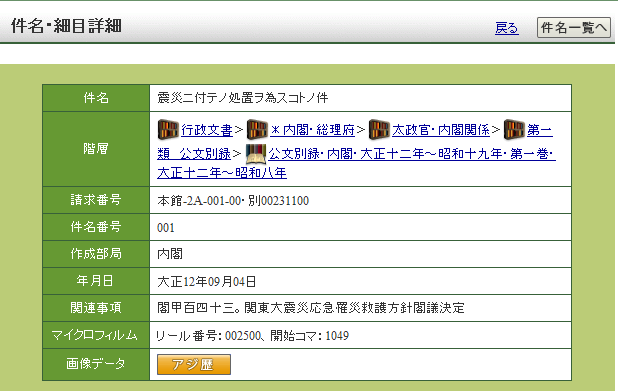 the two digital archives. In the DA, the first level is government agencies which transferred the records as a “fond”; the next four levels (from the second to the fifth levels) are “series”; the sixth level is positioned as a file; and the seventh level is positioned as an item. In JACAR, on the other hand, the first level is a name of the organ which holds the records as “fonds”; the second level is the place of origin as “sub-fonds”; the third level is “series”; the fourth level is “sub-series”; and the fifth level is positioned as a file and the sixth level is positioned as an item. Next let’s look at the catalogs of the two digital archives. The data below is a catalog description for the Cabinet decision on September 4, 1923 by the Gonbei Yamamoto Cabinet for emergency policies after the Great Kanto Earthquake. Image 1 Example of DA Catalog description (Measures to be taken after the Please look at the DA’s display example. (2) “Hierarchy” indicates the hierarchy structure; (1) “Book title” corresponds to “title” in the ISAD (G); (3) “Call number” corresponds to the Reference code; (5) “Name of creator” corresponds to “Name of Creator” in ISAD (G); (6) corresponds to “Dates”; and (7) “Note related” corresponds In addition, even for items not covered by the ISAD (G), information helpful for the user is arranged and provided. (4) is the item number within the file, and (8) indicates the reel number of the microfilm. When you click the orange icon displayed in this row (9), images of the material will be displayed. Next, please look at the JACAR catalog for the same material. 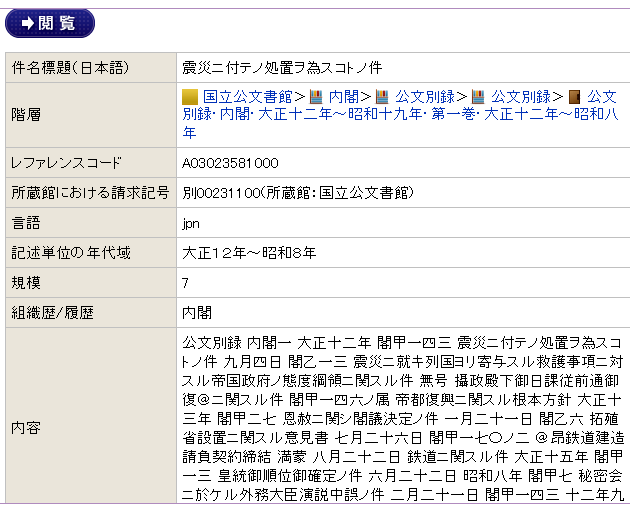 At present, recovery from the Great East Japan Earthquake is fully underway in
parallel with the application of PRAMA. On the other hand, it is pressing to consider how to preserve records related to this unprecedented disaster on a long term basis in order to pass them down for the future generations, as well as to put out the lessons domestically and internationally. As a matter of course, a new question will come up about on what standards we should collect, preserve and provide public access to records. Supplementary Provision 13 of PRAMA requires the Japanese government, approximately five years after the enforcement of this act, to review its provisions and application and to take measures when it finds it necessary. Without doubt, the experiences of records management after the enforcement of PRAMA and that of the Great East Japan Earthquake will have a significant impact on the formation of a new When discussing this new framework, examples in EASTICA and ICA members will be a good reference for us. Thank you all very much in advance for your support and