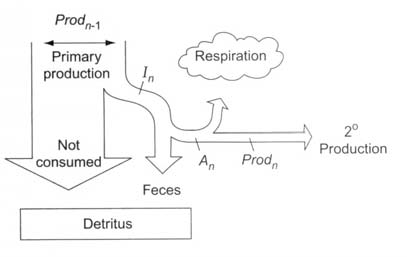 Midterm #2
General Instructions. This is a closed book exam. Please turn off and put away all cell phones, iPods, and other
electronic devices. Answer all of questions 1-4, then pick either essay 5 or 6 to answer. Don’t miss the extra credit on the
last page.

Part 1. Short answer. Answer questions 1-4. Pay attention to all components of the questions to get full credit.
1.a. (10 points) Based on fig. 11.7 from Chapin, Matson and Mooney, below, describe the factors a, b, and c (below) and
how they combine to determine the efficiency of energy transfer from one trophic level to the next.
a. (2.5 pts.) Consumption efficiency(Cn/Pn-1) – the amount of production at a given trophic level that is consumed by the next highest trophic level. b. (2.5 pts.) Assimilation efficiency (An/Cn) – the amount of energy consumed that is digested. c. (2.5 pts.) Production efficiency (Pn/An) – the amount of energy the goes into growth (new biomass) from what was assimilated. (2.5 pts) These steps determine trophic efficiency (the amount of production at a given trophic level that is converted to production at the next highest trophic leve)l by the following formula: Pn/Pn-1 = Cn/Pn-1 * An/Cn * Pn/An. I also accepted the formula Pn = Cn – feces – urine - respiration b. (4 points) How would you expect overall trophic efficiency to differ (in relative terms) for an invertebrate, poikilothermic herbivore compared to an homeothermic predator feeding on that herbivore? Briefly explain. Overall trophic efficiency (Pn/Pn-1) should be higher for the invertebrate poikilotherm herbivore than the homeothermic predator. One could argue that the consumption and assimilation efficiencies would be higher for the homeotherm predator because a greater proportion of animal than plant production is edible (consumption efficiency) and higher, more constant gut temperature and more digestible food (assimilation efficiency). However, the poikilotherm herbivore will have a much higher production efficiency due to lower losses in respiration than in the endotherm, which must expend a lot of energy to maintain constant body temperature. 2. (8 points) Briefly describe how mycorrhizae are different from and similar to N-fixing mutualisms in terms of a) what organisms are involved, b) the primary nutrients taken up and sources of those nutrients, and c) the costs and benefits of the association (i.e., who gets what from whom). (You can do this in table form rather than essay form if you want, just so long as your descriptions are clear). N-fixing mutualisms
Mycorrhizae
a. organisms
Rhizobium bacteria associate with legume plant; Fungi – either Zygomycetes in endomycorrhizae Actionomycete bacteria (e.g., Frankia) associate or Basidiomycetes in ecto’s. Most plants (~80% with some non-legume shrubs and trees of species) form these associations. b. nutrients
Bacteria convert atmospheric N2 into available Fungal hyphae take up nutrients, especially P, from soil and decomposing organic matter. c. costs/benefits
Bacteria get fixed C (carbohydrates) from plant, Fungi get fixed C (carbohydrates) from plant, plant gets P, and some N and water, from fungi. Midterm #2
3. (12 points) Label the pools and fluxes of the nitrogen cycle in the figure below, and state brief answers to the questions. 4. immobilization 5. nitrification 6. NO - Which of the numbered fluxes is (are) partly or completely mediated by bacteria? 1, 2, 3, 4, 5, 7 Which of these fluxes primarily take(s) place under anaerobic conditions? 7, (I also took 1, since nitrogenase is inhibited by O2, though generally N-fixation requires O2 for cellular respiration to generate all the ATP necessary). Which of these fluxes is (are) chemoautotrophic? 5 Of all the fluxes shown, which one(s) compete(s) with plants for available nitrogen? 4, 7, and leaching Of all the fluxes shown, which one(s) result(s) in a net loss of available nitrogen from the ecosystem? 7 and leaching Which of these nitrogen pools is the largest? Atmospheric N2 Which of these nitrogen pools turns over the quickest? NH + 0.5 point each for the numbered pool & fluxes, 1 pt each for the questions 4. (6 points) Your book argues that LAI and season length are better predictors of NPP across biomes than is the daily photosynthesis rate per unit leaf area. Why might this be so, given what we’ve learned about photosynthetic responses to leaf N, plant responses to increased N availability, and plant allocation strategies? Increased leaf N generally leads to increased rates of photosynthesis, greater growth and higher leaf area index (LAI). Therefore, across biomes, higher plant nitrogen in more fertile sites is often “diluted” by greater growth. This relates to plant allocation strategies in that plants will invest abundant nutrients to get more limiting resources (e.g., fixed C). Across biomes, increased growing season length also leads to increased growth and LAI. In both cases, more leaf area correlates best with ecosystem NPP. 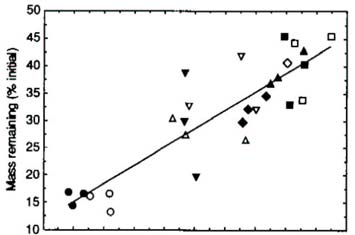 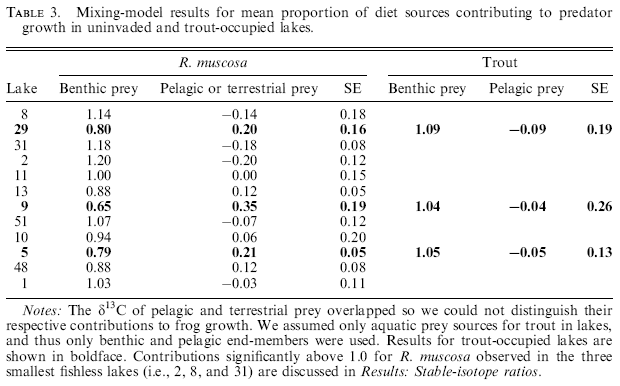 Midterm #2
Part 2. (20 pts.) Answer one of the essay questions, below. BE SURE TO INDICATE WHICH ONE YOU ARE
ANSWERING, and be sure to address ALL components of the question to get full credit. Don’t miss the extra credit
question at the bottom of the last page.
5. (10 points) Given the data shown below (Fig. 3a from Finzi et al. 2002), how do you expect elevated CO2 to affect total
ecosystem decomposition rates, based on its effects on lignin concentration of leaves? Why? Name two other direct or
indirect effects of elevated CO2 that might influence ecosystem decomposition and briefly describe the mechanism.
Fig. 3a from Finzi et al. 2002, showing percent of initial mass remaining following 24 months of decomposition for litter of different species. The different symbol styles represent different species, with filled symbols being from ambient CO2 and dark symbols from elevated CO2 (3 replicates per species from each treatment). 6. A) Explain the concept “you are what you eat, isotopically speaking” for 13C and how that relates to a food web isotopic mixing model. B) How does 15N differ from 13C in this regard? C) Using this background, explain how trout influenced the feeding relationships of Rana muscosa, using the date from Table 3 of Finlay and Vredenburg (2007), below. 5. A.(10 pts) i. Finzi and Schlesinger (2002) hypothesized that under higher CO2, leaf litter quality would decrease (higher lignin) and decomposition rates would slow, also slowing rates of nutrient regeneration. ii.From fig. 3a, we indeed see a correlation of higher lignin content with decreased decomposition rates (greater % mass remaining). This relationship is mostly driven by differences among species in leaf lignin content. iii. However, the figure shows no consistent effect of increased CO2 on % lignin or decomposition on a species-by- species basis (i.e., comparing dark symbols with unfilled symbols). Sometimes dark symbols show higher lignin and lower decomp (upward triangles), sometimes lower lignin and higher decomp (diamonds), and sometimes no difference in decomp no matter what difference in lignin (circles and squares). iv. Overall, then, these data show no support for a litter chemistry feedback to decomposition and nutrient Midterm #2
B. (5 pts.) One alternative, indirect mechanism that could affect ecosystem- level decomposition is hinted at in the data shown in fig. 3a and was discussed explicitly in the paper. Shifts in species composition resulting from different competitive abilities under elevated CO2 could lead to large changes in ecosystem rates of decomposition if new dominant species differ greatly in litter quality from old dominant species. Given the data shown, this could result in a much greater shift in overall litter quality than chemical effects caused by elevated CO2. C. (5 pts.) Another alternative, indirect mechanism was also discussed in the Finzi & Schlesinger paper. If increased CO2 causes increased plant production and litterfall, then more nitrogen immobilization could result from the higher inputs of high C:N material. If there is not enough available N to fulfill the microbial needs for nitrogen, then decomposition would slow. Eventually, however, even slow decomposition is expected to lead to lower C:N ratios in the decomposing organic matter, such that N mineralized will roughly equal demand. I also accepted indirect effects of elevated CO2 on climate (temperature and/or moisture) if these were explained adequately and with ecological consistency in the arguments. 6. A) You are what you eat, isotopically speaking” means that consumers quite closely reflect the δ13C value of their food, with very little fractionation. This is useful in figuring out food sources from mixing models, in those cases where there are two food sources with very different δ13C signatures. In this case, the δ13C signature of the consumer will reflect the weighted average of the δ13C signatures of the food sources: δ13Csample = f1∗δ13Cs1 + f2*δ13Cs2, where f1 and f2 are the fractions of total diet that come from food sources s1 and s2 (f1+f2 = 1). This gives two equations with 2 unknowns, which can be solved for f1 and f2. B) If you have three food sources instead of just two, you can use 15N in mixing models in concert with 13C, with one exception: there is significant fractionation with 15N because N is in so many metabolically active compounds and the lighter isotope 14N tends to get excreted more in feces and urine (“you are what you eat minus what you excrete”). On average, there is a +3.4%o (per mil) shift in δ15N with each trophic level. This can be useful in trophic studies to determine the average trophic level of the consumer. C) The data in Table 3 from Finlay and Vredenburg (2007) illustrate that presence of trout effectively shifts the diet of frogs from benthic to more pelagic prey. The mixing model with benthic vs. pelagic prey as end members shows that trout diets are completely benthic prey (fractions of benthic prey are not significantly different from 1). This is true for frogs in lakes without trout as well, where the fraction of benthic prey ranges from 0.88-1.2. However, in lakes with trout, the fraction of benthic prey decreased to 0.65-0.80, indicating increase reliance on pelagic or terrestrial prey, likely due to competition with trout for benthic prey. (Data not shown here indicate that emergence of adult mayflies and stoneflies was much lower in lakes with than without trout.) EXTRA CREDIT (2 points). Kirchoff (2002) shows a map with ~22.5 km of spawning streams in the watersheds studied by Helfield & Naiman (2001) (H&N). H&N estimate that salmon deposit a total of ~ 11,000 kg of marine-derived nitrogen per year in both of these watersheds combined. Using these data, estimate the amount of MDN deposited in g/m2/yr, assuming, for simplicity, equal deposition from the stream to 100 m away. (Note this is a “back of the envelope” estimate – you shouldn’t need a calculator.) Is this enough to fertilize trees?