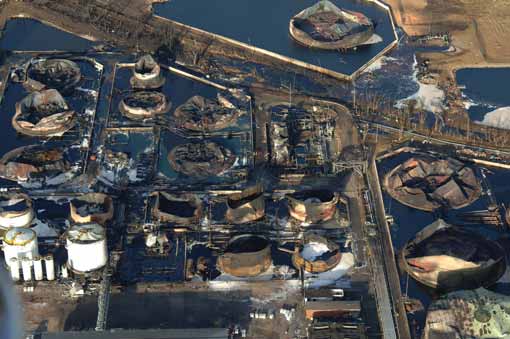 Incident impact
What issues have
emerged from the
Buncefield depot fire
which generated
around 30m litres of
contaminated runoff?
Aidan Turnbull
sought the opinions
of Gary McDowall,
Franz Kitzwögerer
and Colin Chiverton
about possible fire
service solutions.
Pollution containment
and cleanup
such a way that it extracts the fluorosurfactants,rendering the treated foam solution free of any The major fire at the Buncefield fuel
storage site, which burned for three daysfrom the 11th to the 13th December 2005, contaminants known to have a detrimental impact is known to have produced approximately 30 million litres of contaminated firewater. One of Should we depend on foam agents?
those concerned about the fate of the runoff isGary McDowall of Foamclean Limited.
“Safe disposal of firefighting foam and, in some “All of this firewater contains fluorosurfactant cases, foam concentrates has never raised more and many other contaminants, and will require questions than it does currently,” reports Gary.
From the well-documented withdrawal by 3M Gary’s company, Foamclean Limited, provides from fluorosurfactant manufacture using perfluo- products and services designed to resolve issues rooctanyl sulphonate (PFOS) chemistry in May with the disposal of firefighting foam. Using a 2000 to the present day, dealing with foam as a patented and tested system, Foamclean Limited waste product has become a fundamental environ- removes the chemicals from the solution that make a fire fighting foam an effective extin- There are those who would argue that there guishing agent. The process employed removes should be a reduction in our dependency on foam the environmentally damaging fluorosurfactants products because of their potential detrimental and other agents, rendering the treated solution impact on the environment, comments Gary. “Foam manufacturers have developed fluorosur- Foamclean Limited uses the ‘Perfluoro Filtration factant free foams (FSFF) that have no long-term Extraction Cleaning and Treatment’ process detrimental environmental impact. There are known as perfFECTTM. This is a patented process numerous areas of application for this type of for cleaning fluorinated solutions, such as AFFF product, in particular with the UK fire & rescue foam. The process works by passing the solution services. However, the main issues relate to foams through a carefully-designed carbon matrix in 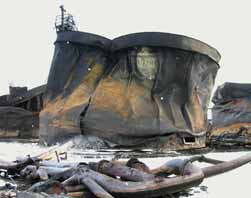 Incident impact
PRODUCT PROFILE
unequalled anywhere in the world,” says Mr describe specific groups of substances which fall into two lists, List I and List II. Those detailed in CONTAINING
List I include organohalogen compounds and special natural substances which can fight fires WASTE RUNOFF
should be prevented from entering groundwater.
and oil pollution but are completely harmless to All Aqueous Film Forming Foam (AFFF) formula- the environment. These organisms are based on tions contain fluorosurfactants which are highly-degradable surfactants. They stimulate the organohalogens and fall within List I of the micro-organisms to multiply substantially, thus bringing about a rapid biological degradation Gary concludes: “Any substance that is found to be persistent, bioaccumulative or toxic (PBT) must In September 2002, approximately 5,000 litres be prevented from entering groundwater. All of commercial heating oil spilled into Lake fluorosurfactants are known to be environmentally Goldegg in Austria, affecting tourism, drinking How do you ensure that contam-
very persistent (vP) with a halflife of the order of a water quality and some commercial operations inated material is collected for
supplying mud packs to health farms. This whole proper off-site disposal? UK-
breakdown products, for example, PFOS, also area is very environmentally sensitive and based Professional Protection
bioaccumlate and are toxic. The lithium salt of BIOVERSAL was the only product that met the Systems, known for supplying
criteria for use in such an important area. In April bespoke decontamination
2003 - after treatment - the water was passed as fit solutions to emergency services
Should brigades use safer foams?
for drinking by the local authority in Salzburg.
in 60 countries has developed a
range of waste water bladder
Franz Kitzwögerer of BIOVERSAL looks to the This was an incredible achievement considering tanks with capacities from 100
example of Austria’s fire services as the way the previous level of contamination.
to 6,000 litres which can be
forward. He comments: “In Austria more than filled via a range of wastewater
half the fire brigades have opted to use alternative UK Environment Agency’s view
pumps, including units with
firefighting foam extinguishing agents rather than Colin Chiverton, head of the team dealing with floor level suction that will
create problems for the local environment. These the foam at Buncefield for the Environment remove wastewater and solids
products do not carry any hazardous markings for up to 6mm in diameter down to
transport and the products do not carry any “All the contaminated firewater has now been a 1mm depth.
removed from the Buncefield site and is being To further reduce the spread of
“BIOVERSAL QF corresponds with the highest securely stored at a number of sites around the contaminant PPS have
standards in the world against fires and fulfils not country. It is the oil company’s responsibility to developed raised plastic
flooring (made from recycled
only the EN-standards but also international come forward with options for the safe disposal of product) to keep contaminant
from legs and feet, or boots, and
BIOVERSAL works like this - the product encap- “We worked closely with the fire services from the company also offers a
sulates particles of the hydrocarbon when foaming the earliest stages of the incident to plan a decon basin or boot bath with a
which means there is a high portion of water response that would minimise the environmental disposable liner, the contents of
which cools in a very effective and efficient way, impact and risks to underground and surface which can then be pumped into
making three-dimensional fires easier to control.
waters drawn for public supply. This covered a bladder. More information?
“Next, BIOVERSAL QF prepares the hydro- arrangements for sourcing water, for containing Visit: www.ppsgb.com
carbons for a rapid biological breakdown during firewater, and the use of foam. Measures were put the extinguishing process. This so far, has been in place to contain foam on site as well as contam-inated firewater.
“We aim to protect the environment and human health from exposure to PFOS. We will use ouravailable powers to prevent, and where this is notpossible, to minimise the emissions of PFOS tothe environment, however the use of such ‘PFOSfoams’ is not currently illegal. Defra did bringforward proposals to phase out the use of PFOS infirefighting foams but the European Commission proposed a Directive on PFOS last December. “This does not restrict the use of PFOS in firefighting foam and discussions on this will now Browse our new online Buyers’ Guide at: www.emergency-directory.com 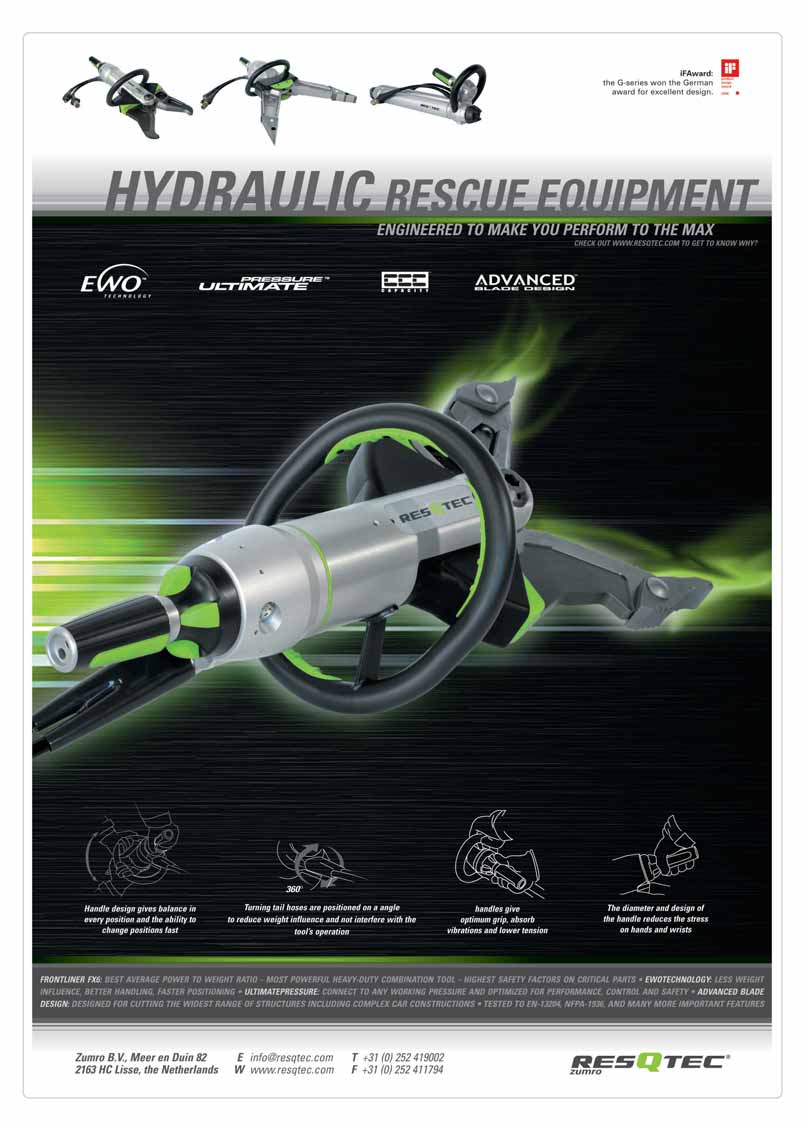 POSITIVE VOICES–MAY 2010 Your Newsletter by Positive People for Positive People LGBTQ Adult Education Series: Three evenings in May and June 2010 Come out and find out about current issues of importance to members of the lesbian/gay/ bisexual/ transgender/ queer communities. You may attend one or all of the programs in the series. Allies welcome! Refreshments will be served. Free