University of Rome "Tor Vergata", Italy We compare government investment and consumption multipliers in developed economies during the recent …scal consolidation, following the Blanchard and Leigh (2013) approach. We …nd that, in highly-indebted countries, the investment multiplier is likely to be much higher than what has been assumed by policy makers and much higher than the consumption multiplier. This leads to the conclusion that the consolidation should be accompanied by increased public investment.
Keywords: …scal consolidation, …scal multiplier, public consumption, public investment, public Developed economies are currently going through a …scal consolidation. One of the main questions for developed countries is how to design the consolidation in order to reduce the damage it will have on growth (see Lagarde (2013)). To do that, activities with lower impact on growth should be reduced more than activities with a greater impact.
The author would like to thank Alberto Zazzaro, Emanuele Brancati, Giovanni Callegari, Maddalena Cavicchi- oli, Gerardo Manzo, Sabina Silajdzic and other participants at the 54th Annual Conference of the Italian EconomicAssociation, for very useful suggestions, and one anonymous referee for comments on an earlier version of the paper.
It is usually considered that government investment has a greater impact on growth (i.e., mul- tiplier) than government consumption. For instance, the Golden Rule of public …nance states that governments should borrow only for investment, not for consumption, since investment pays for itself, through the future tax revenues generated by the new capital stock (Perotti (2004)). Some economists have argued that the current …scal consolidation should allow some support through public invest- ment. Christina Romer, for instance, argues: "There is simply no question that the United States needs to enact a comprehensive plan for long-term de…cit reduction as soon as possible. But any such plan could and should include another substantial dose of …scal expansion in the short run— ideally one oriented toward public investment." (Romer (2012), p. 13). Similarly, Spilimbergo et al. (2008), when advising on the appropriate …scal policy for the crisis, say: "(.) spending programs, from repair and maintenance, to investment projects delayed, interrupted or rejected for lack of funding or macroeconomic considerations, can be (re)started quickly" (Spilimbergo et al. (2008), p. 5).
Despite these recommendations, there is very scarce evidence that the government investment multiplier is higher than the government consumption multiplier in the distressed economies. Hence, it may not come as a surprise that the …scal authorities in these countries have ignored these suggestions.
As a result, investment spending has been cut more than consumption expenditure during the on- going consolidation (see Figure 1). In Greece, for instance, public investment in 2010 and 2011 has been cut by 1.5 percent of Gross Domestic Product (GDP) (relative to the previous three years), while public consumption has been cut by only 1 percent. In Ireland, similarly, investment has been cut by 1.5 percent of GDP, while consumption by only 0.2 percent. As a matter of fact, public investment in 37 developed economies that we analyse1 , has been cut, on average, by 0.2 percent of GDP, while public consumption has been increased by 0.1 percent of GDP2 (see section III on the data sources).
1. We analyse the countries that the World Bank classi…es as high-income, plus the EU countries that are still low-income. See section III for more.
2. If the two outliers are excluded (Bulgaria and Romania, where consumption has fallen by 9 percent of GDP), the average increase in public consumption is even higher, 0.6 percent. 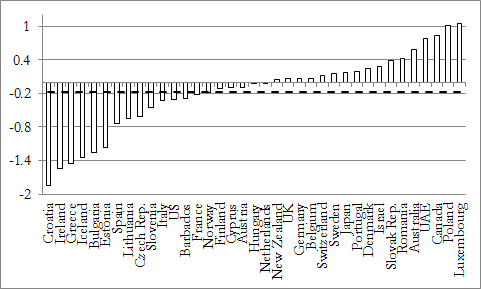 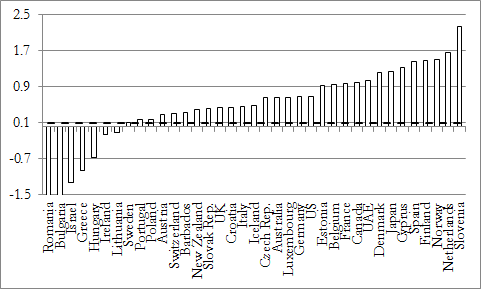 Horizon Pharma Announces FDA Approval of DUEXIS® (ibuprofen/famotidine) for the Relief of the Signs and Symptoms of Rheumatoid Arthritis and Osteoarthritis and to Decrease the Risk of Developing Upper Gastrointestinal Ulcers NORTHBROOK, Ill. – April 25, 2011 – Horizon Pharma, Inc., a biopharmaceutical company developing and commercializing innovative medicines to ta