Inducible and tissue-specific gene targeting to cholinergic neurons lines and transgenic mice (Ibáñez and Persson, 1991; Lönnerberg et al., 1995;Lönnerberg et al., 1996). With the aim of obtaining reversible and regulatableexpression of genes targeted to cholinergic cells, we have combined the specificity ofthe enhancer region of the ChAT gene with the tetracycline inducible promoter system(Gossen et al., 1995).
Figure 1. Induction of luciferase activity by doxycycline in transfected cholinergic
cells. Cholinergic SN6 cells and FR3T3 fibroblasts were transiently transfected with pUHC13-6
alone (-) and together (+) with (A) pEH2.3CMVrtTA or (B) pEH2.3TKrtTA. 2.5 mg of each plasmid
were used for a 35 mm well. Doxycycline was added to indicated wells immediately after transfection
at a concentration of 1 mg/ml. Cells were harvested after 48 hours incubation followed by assay of
luciferase activity.
Cholinergic cell-type specific activation of a reporter gene by doxycyclin.
Two different promoters were tested for their efficiency at directing rtTA expression.
Plasmids expressing rtTA under control of the 2336 bp cholinergic-specific regulatoryregion followed by the CMV (plasmid pEH2.3CMVrtTA) or TK (plasmidpEH2.3TKrtTA) promoters were transiently co-transfected together with a plasmidexpressing luciferase under control of heptamer tetop rtTA binding sites and the TK 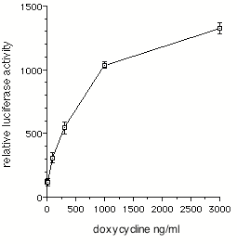 Inducible and tissue-specific gene targeting to cholinergic neurons minimal promoter (plasmid pUHC13-6) into the cholinergic neuroblastoma cell lineSN6 or into the rat fibroblast line FR3T3. For each plasmid pair, 1 mg/ml ofdoxycycline was added to one of two duplicate wells immediately after transfection.
Forty eight hours later, the cells were collected and processed for luciferase assays.
Doxycycline induced 7- and 13-fold activation of the reporter gene in cholinergic SN6cells that carried the pEH2.3CMVrtTA and pEH2.3TKrtTA constructs, respectively.
Neither promoter showed any induction in non-cholinergic FR3T3 fibroblast cells (Fig.
1). The CMV promoter exhibited higher absolute expression levels than the TKpromoter when induced by doxycycline in SN6 cells, but displayed a significantbackground luciferase activity in the absence of doxycycline. No measurablebackground was detected with the pEH2.3TKrtTA construct (Fig. 1). Thus, cholinergic-specific inducibility was higher with the TK promoter construct, even though thispromoter had weaker overall activity than CMV.
Figure 2. Dose-dependent induction of luciferase activity by doxycycline in
transfected SN6 cells. SN6 cells were transfected with 2.5 m g each of pUHC13-6 and
pEH2.3TKrtTA. Immediately after transfection the indicated concentrations of doxycycline were
added to the medium. Cells were grown for 48 hours, harvested, and processed for luciferase
assays. Values shown represent mean +/- standard error (n=3).
Dose-dependent induction of the luciferase reporter gene SN6 cells were transiently co-transfected with equal amounts of pEH2.3TKrtTA andpUHC13-6, and grown in the presence of various concentrations of doxycycline. Cellextracts were made after 48 hours, and luciferase enzyme activity was measured. Adose-dependent induction of the reporter gene was observed; maximal effects wereseen at a doxycycline concentration of 3000 ng/ml (Fig. 2).
Targeted expression of rtTA in cholinergic cells of transgenic mice