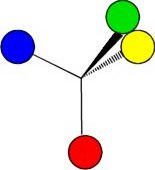 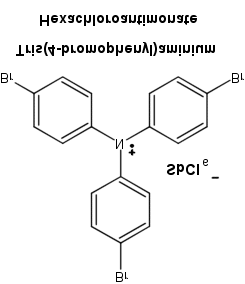 Tris(4-bromophenyl)aminium Hexachloroantimonate : A Versatile Radical Cation Catalyst for Olefin Addition Reactions ? The title compound , which I’ll refer to as “tris” throughout this report , is a type of Wurster Blue salt , with an organic radical cation and the accompanying hexachloroantimonate anion : The original Wurster Blue compound was a para-phenylenediamine : Although I haven’t indicated it in the sketches above , the two aminium compounds are resonance-stabilized , and indeed are quite stable at room temperature . We note a sort of mixed-valency in the latter compound , with an electron resonance occurring between the two nitrogen atoms , one of which formally has the lone pair of electrons (N:) , while the other has been shown in the sketch with a missing electron (N.+) and a resulting cationic charge .

In the case of tris , it is conceivable that an electron resonance is occurring between the nitrogen atom and the three bromine atoms , via the pi electron cloud over the benzene rings : (N.+) + (Br :) Q (N:) + (Br .+) . It should be noted that the hexachloroantimonate anion is an oxidizer ; the standard reduction potential of Sb(V) in a chloride environment is E0red = 0.82 V , which is in the “moderate” range . Tris is known to chemically oxidize aromatic amines , ferrocene , phenoxide anions , and iodide anion (ref. 1 , page 7) . Tris can be readily prepared by a one-electron oxidation of the parent tertiary amine , tris(4-bromophenyl)amine , by antimony pentachloride : CH2Cl2 , 25 ºC Upon addition of dry ether to the deep blue methylene chloride solution of tris , the radical cation salt is precipitated as “fine , blue , needle-shaped crystals” (ref. 2) . Tris is also commercially available , eg. from the Aldrich Chemical Company . Tris has been found to catalyze the Diels-Alder reaction in cases where the dienophile is non-electrophilic (ref. 3) . Generally , a reasonably electrophilic dienophile , CH2=CH–X , is required for reaction with the diene , to obtain a cyclohexene product . The pendant atom or group “X” is usually electron withdrawing in nature , such as –COOH , -COOR (ester , amide , etc.) , -CN , -NO2 , and so on . If “X” is electron donating in nature , such as H or R (alkyl , aryl) , the Diels-Alder reaction may not succeed . Very likely tris is forming a cationic complex with the electron-rich olefins , and it is this electrophilic complex that is reacting with the diene . The authors in ref. 3 have suggested that tris cleanly oxidizes the dienophile to the corresponding radical cation , which , thus activated , cyclizes with the diene to the cyclohexene product . As an aside , I wonder if this is actually the case . I was under the impression 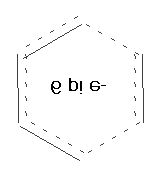 that the driving force for the Diels-Alder cyclization was the formation of a transient aromatic resonance in the transition state , which would require six electrons in the pi MO : Would only five pi electrons in the ring be enough for aromatic stabilization of the transition state ? Free radicals are known to catalyze the addition of various reagents to olefins . The following species will add to the olefin bond in the presence of free radicals : RSH , CCl4 , CBr4 , CHBr3 , CCl3Br , BrCH2COOEt , RCHO , Ph3SiH , and COCl2 , where the abstracted atom is colored red (ref. 4) . The table on the following page lists a variety of additions of specific reagents to specific olefins , with a brief mention of experimental conditions and the free radical inducing agent involved in each reaction (ref. 5) . Those reactions in which new carbon-carbon bonds are created will of course be of the greatest interest to the synthesis chemist . My suggestion here is : could tris replace the free radical inducing agents used in these addition reactions ? Most of the free radical generating agents are peroxides of one sort or other : benzoyl peroxide is a common one , since it is reasonably stable under ambient conditions , and it decomposes smoothly to phenyl free radicals at about 80 ºC (reactions with it are often conducted in refluxing benzene , at that temperature) . Persulfate salts , such as potassium persulfate , K2S2O8 , are common free radical initiators in 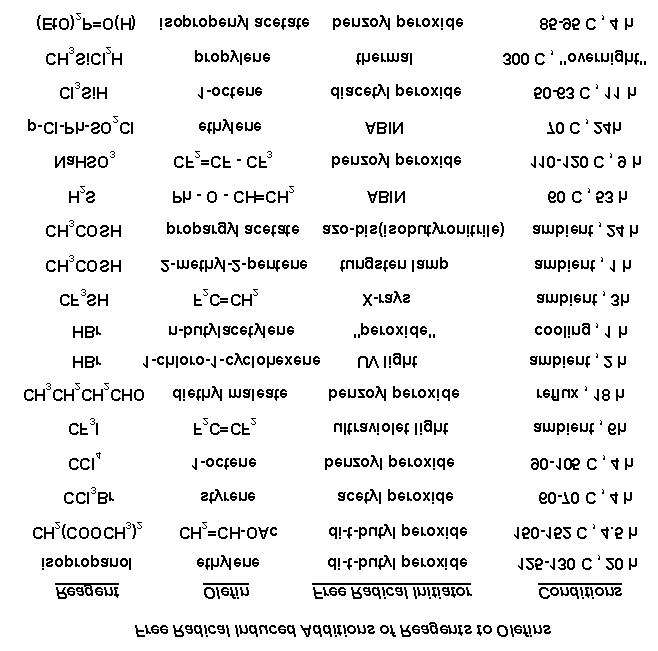 water-based addition reactions of olefins (for example , in the large-scale industrial production of latex emulsions) . Because it is an oxidizing agent , tris couldn’t be used with those reagents listed that are sensitive to chemical oxidizers , such as H2S , RSH , RCOSH , probably HBr , NaHSO3 (which is water-based) , and possibly the silanes and the diethyl phosphite . That still leaves the most interesting ones , in my opinion : the ones in which C–C bonds are formed .

Mechanistically , all of the free radical producing agents listed in the above
table are known to generate neutral free radicals when they decompose . For
example , benzoyl peroxide is a good source of phenyl free radicals :
Tris , on the other hand , is a radical cation ; the third type of free radical is
the radical anion , not discussed any further here . How would tris , as a
radical cation , interact with the systems listed above in the table , and with
others , in which neutral free radicals traditionally have been used to activate
the olefin additions ? In particular , can tris activate methylene olefins (for
example , ethylene , CH2=CH2 ; propylene , CH2=CH–CH3 ; isobutylene ,
CH2=C(CH3)2 ; vinyl chloride , CH2=CH–Cl ; vinylidene chloride , CH2=C(Cl)2 ; vinyl acetate , CH2=CH–OAc ; etc.) without polymerizing them ? These are of course monomers , the precursors of all the familiar modern polymers , our beloved plastics . Tris might thus offer its catalytic services to synthesis chemists , greatly extending the range of olefin addition reactions , including cyclizations such as the Diels-Alder reaction , which seems to have received only a cursory evaluation so far . Such olefin additions might be carried out , with the activation by tris , under mild ambient conditions , short reaction times , simple experimental methods , and with good yields of clean products . While tris as a chemical reagent is moderately expensive , it is used only in catalytic quantities , and might be recovered from a workup of the spent reaction solvent . It is readily available , either commercially , or prepared fresh by the researcher from the tertiary amine and SbCl5 . Finally , a novel synthesis method for creating new carbon-carbon and carbon-heteroatom bonds is well worth investigating . (The references follow on the next page) . 1. G.W. Cowell , A. Ledwith , A.C. White , and H.J. Woods , “Electron-transfer Oxidation of Organic Compounds with Hexachloroantimonate [SbCl6]- Ion” , J. Chem. Soc. B (2) , pp. 227-231 (1970) . 2. F.A. Bell , A. Ledwith , and D.C. Sherrington , “Cation-radicals : Tris-(p-bromophenyl)amminium Perchlorate and Hexachloroantimonate” , J. Chem. Soc. C (19) , pp. 2719-2720 (1969) . The authors conclude , “For routine oxidations , therefore , the hexachloroantimonate salt is to be preferred [to the perchlorate]” (p. 2720) . The latter compound was found to be thermally and photolytically more stable than the perchlorate . I might add that perchlorate salts of organic compounds , when heated , are prone to sudden detonation , an unfortunate consequence of compacting together oxygen atoms (in ClO4-) with carbon and hydrogen atoms , in the organic cation . As pointed out earlier , the Sb(V) atom in the SbCl6- anion is a moderately strong one-electron oxidizer ; nevertheless , I wouldn’t expect SbCl6- salts with organic cations to be explosive in nature , unlike the violent C-H-O oxidizing oxidizers like perchlorate and nitrate anions . 3. D.J. Bellville , D.D. Wirth , and N.L. Bauld , “The Cation-Radical Catalyzed Diels-Alder Reaction” , J. Amer. Chem. Soc. 103 (3) , 4. D.J. Cram and G.S. Hammond , Organic Chemistry , 2nd ed. , McGraw-Hill , New York , 1964 ; p. 529 . 5. C. Walling and E.S. Huyser , “Free Radical Additions to Olefins to Form Carbon-Carbon Bonds” , Ch. 3 , pp. 91-149 in Organic Reactions , vol. 13 , A.C. Cope (ed.) , John Wiley , New York , 1963 ; and , F.W. Stacy and J.F. Harris Jr. , “Formation of Carbon-Hetero Atom Bonds by Free Radical Chain Additions to Carbon-Carbon Multiple Bonds” , Ch. 4 , pp. 150-376 in Organic Reactions , vol. 13 , A.C. Cope (ed.) , John Wiley , New York , 1963 .

The Creation of Senseless Violence, Psychiatric Drugs, and Kids Who Kill The rise in gratuitous and senseless violence is a disturbing recent addition to the community landscape. Psychiatrists have tried to sell us on all the wrong reasons for this — everything from a person's mental illness, poverty and broken families to genetic makeup; however, the fact missed by most is