Glucosamine sulfate in the treatment of knee osteoarthritis symptoms: a randomized, double-blind, placebo-controlled study using acetaminophen as a side comparator 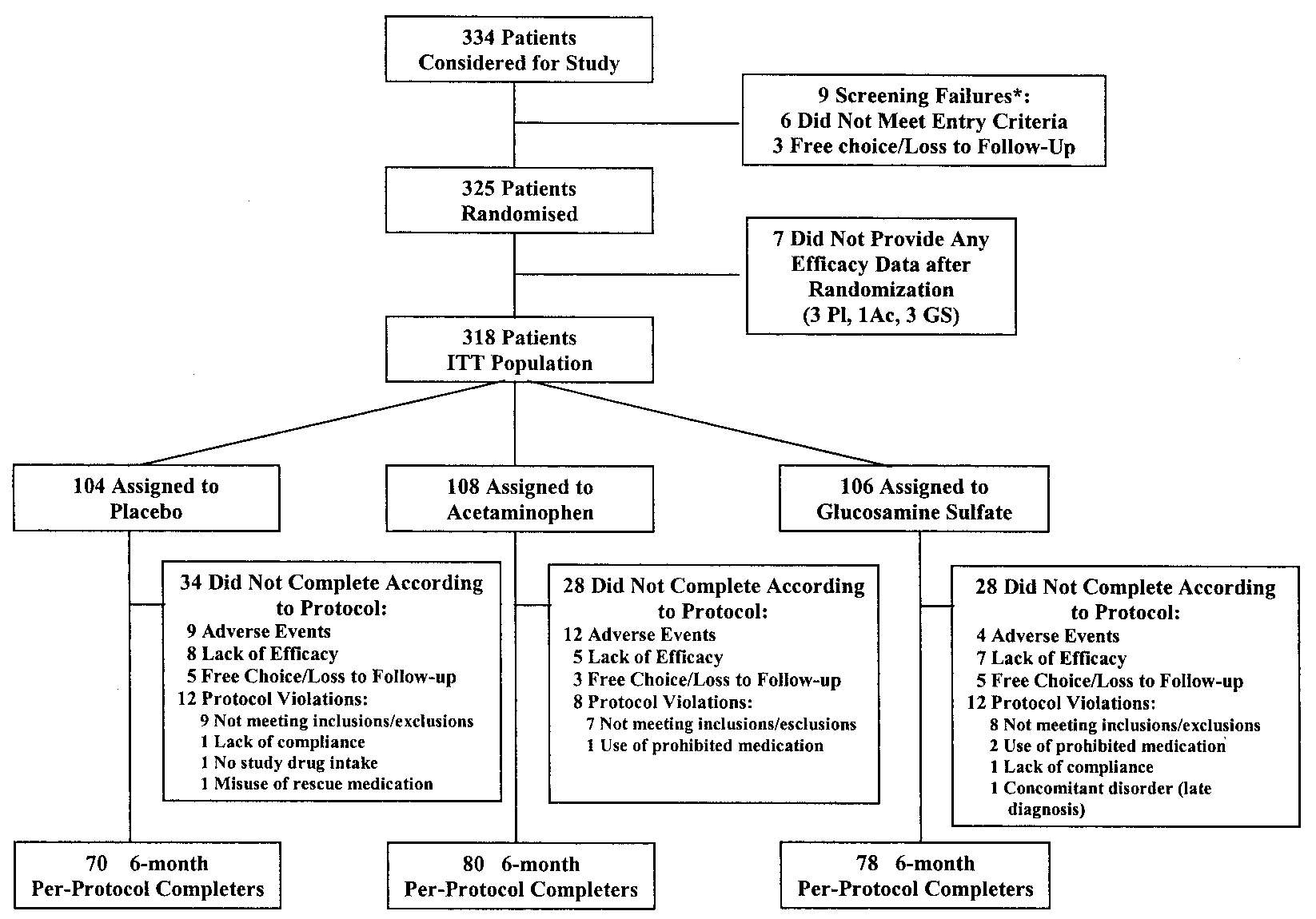 Figure 1. Study profile. ء ϭ patients who agreed to baseline evaluation but did not qualify for randomization. Pl ϭ
placebo; Ac ϭ acetaminophen; GS ϭ glucosamine sulfate; ITT ϭ intent-to-treat.
while the difference between each active group and placebo in patients considered for the study could be randomized.
the proportion of OARSI-A responders in the ITT population Seven patients did not provide any efficacy data after was analyzed by 2-tailed chi-square test. The chi-square testwas also used to compare each active group with placebo for randomization and were not included in the analysis, the proportion of ITT patients satisfying the additional efficacy leaving a total of 318 patients in the ITT population parameters, in the following order: OARSI-B responders, pain (Figure 1). Twenty-six percent of the patients receiving MCII, function MCII, pain PASS, and function PASS. To glucosamine sulfate or acetaminophen did not complete adjust for the multiplicity represented by the 2 active groupcomparisons with placebo for the dichotomous secondary the 6-month treatment period according to the study outcome (OARSI-A) and additional efficacy parameters, the protocol, compared with 33% of the patients in the sequentially rejective Bonferroni method was applied, setting ␣ at 0.05 divided by the number (n) of comparisons (0.05/2 ϭ There were no significant differences in the rea- 0.025) for the lowest P value obtained in the 2 comparisons, sons for dropout (Figure 1). The acetaminophen group and ␣ ϭ 0.05/(n Ϫ 1) (0.05/1 ϭ 0.05) for the second compar-ison if the first yielded a significant result (25,26).
tended to have a higher number of dropouts due to To achieve meaningful comparisons across groups over adverse events, but there was a trend in this group a standardized period, the use of the rescue medication was toward fewer withdrawals due to other reasons; these assessed in per-protocol completers over the 6-month treat- observations are probably of minor clinical significance ment course. The mean number of days of use was tabulatedfor descriptive purposes, with calculation of the daily average given the low number of events. Protocol deviations ibuprofen tablet consumption, while the proportion of patients consisted mainly of patients not meeting some of the with any use of the rescue medication was compared between inclusion/exclusion criteria (mostly presence of concom- each active treatment group and the placebo group, by chi- itant diseases, insufficient symptom severity, or violation of required demographic characteristics); these patientswere therefore withdrawn early from the protocol and were then assigned a negative efficacy outcome, often Recruiting started in May 2000, and the last corresponding to no change from baseline. Other rea- followup was performed in December 2002. Most of the sons for withdrawal were evenly distributed throughout 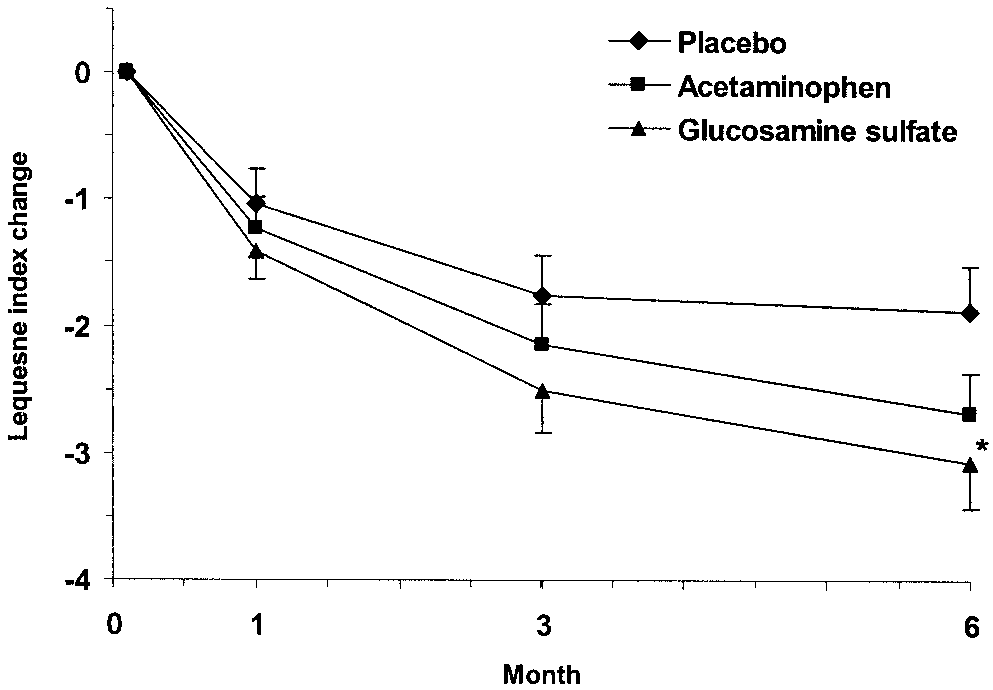 Number of patients withdrawn from the protocol after each the study. The number of patients, by treatment group, Figure 2. Mean and SEM changes in the Lequesne index after 1, 3,
who were withdrawn from the protocol at each study and 6 months of treatment, in the intent-to-treat population (n ϭ 104 in the placebo group, 108 in the acetaminophen group, and 106 in the The demographic and clinical characteristics of glucosamine sulfate group). ء ϭ P ϭ 0.032 versus placebo.
the randomized patients were comparable at baseline(Table 2). As expected, the majority of patients were ϳ11, indicating disease with moderate symptom sever- female. The mean age was between 60 and 65 years. On ity. This was confirmed by the baseline WOMAC pain average, patients were overweight, and 5% of them were and function subscale scores, which averaged ϳ40 when obese (BMI Ͼ30 kg/m2). The mean duration of knee OA normalized to a 0–100 scale (i.e., similar to 40 mm on a was ϳ7 years, and slightly more than half of the patients had a Kellgren/Lawrence radiographic grade of 2, al- Compliance with the study medication regimen though grading of 2 or 3 was not firmly assigned to was good in all treatment groups. In trial completers, the ϳ10% of the patients. Inflammatory joint disease was an exclusion criterion, but signs of modest inflammation, The changes in the Lequesne index after 1, 3, and i.e., mild joint effusion, were present in 12–15% of the 6 months of treatment in the ITT population are re- patients. The mean Lequesne index score at baseline was ported in Figure 2. The primary outcome measure was Demographic and baseline clinical characteristics of patients in the intent-to-treat * Except where indicated otherwise, values are the mean Ϯ SD. WOMAC ϭ Western Ontario andMcMaster Universities Osteoarthritis Index. 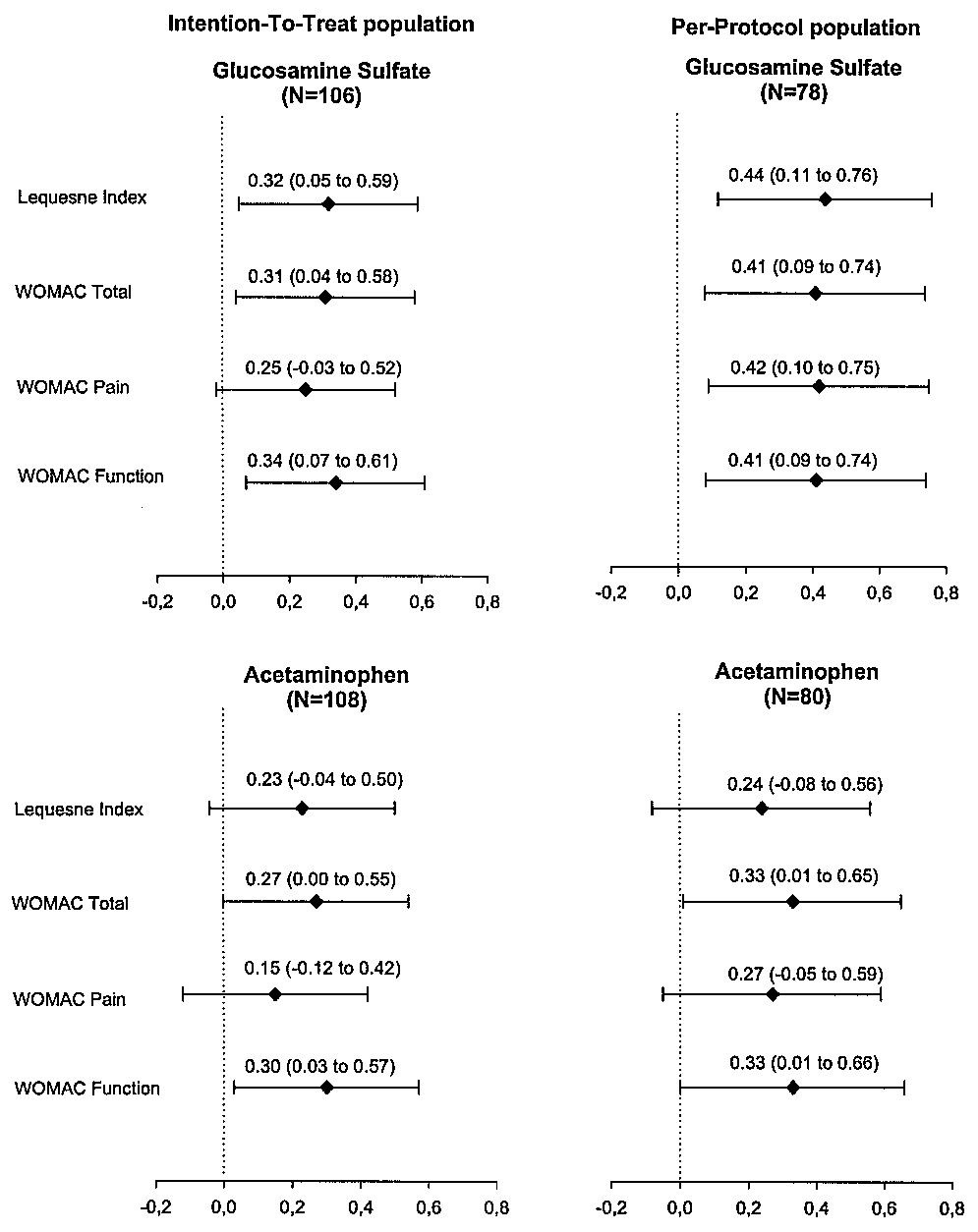 YLMP2009 Abstract - www.ifa.amu.edu.pl/ylmp Is Neuro–Linguistic Programming hoax or hard science? A neuroscientific investigation into the theory Marek Kiczkowiak (School of English, Adam Mickiewicz University, Poznań) Neuro–Linguistic Programming [NLP] was first introduced in the early 1970s with a publication by Richard Bandler and John Grinder “Structures of magic I and