Hormone Replacement Therapy (HRT) Villareal et al7 analyzed the effect of HRT on BMD as well as on bone turnover markers in women aged 75 or older in a randomized controlled trial (RCT). In this double-blind, placebo-controlled trial lasting from September 1995 to August 2001, 67 women with mild to moderate physical frailty were examined. Patients exhibiting 2 of the 3 following parameters were considered to display mild to moderate physical frailty: (1) 11-18mL/min per kg of body weight for low peak aerobic power, (2) self-admitted need for assistance with 2 necessary activities of daily living (ADLs) or 1 basic ADL, and (3) a test score of 18 to 22 on a range of 0-36 on the modified physical performance test. Patients either received 0.625mg/d of conjugated estrogen combined with 5mg/d of medroxyprogesterone for 13 days every three months (n=45) or a placebo (n=22). After 9 months, patients receiving conjugated estrogen and medroxyprogesterone displayed a 4.3% increase in lumbar spine BMD compared to 0.4% (95% CI) increase exhibited by the placebo patients. An increase of 1.7% in total hip BMD was observed in patients taking the HRT, while a decrease of 0.1% from the baseline was observed in the placebo In a randomized double-blind, placebo controlled study, Recker and colleagues8 examined 128 women who were older than 65. Eligible patients displayed a spinal BMD less than or equal to 0.90g/cm2 at baseline. Patients either received 0.3mg/d of conjugated equine estrogen (CEE) and 2.5mg/d medroxyprogesterone (n=53) or a placebo (n=54). After 3 years, patients treated with HRT demonstrated a 4.0% increase in spinal BMD, while the placebo group demonstrated a 0.35 decrease in spinal BMD. Studies performed by Ettinger et al9 and Prestwood et al10 suggested that raloxifene increased overall BMD significantly when compared to the placebo. Ettinger et al9 examined 7705 postmenopausal women with osteoporosis from 25 countries to determine the effect of raloxifene on femoral neck and spine BMD. The patients were separated into 1 of 2 subgroups. If the subject displayed a femoral neck or lumbar spine BMD t score of less than -2.5, then they were grouped into the first study group (n= 5064). The second study group (n=2641) similarly exhibited low BMD t scores, but also had suffered at least one fracture prior to the start of the study. Within each of these subgroups, patients were randomized to receive either 60mg/d of raloxifene, 120mg/d of raloxifene, or the placebo. Each patient also received daily calcium (500mg) and cholecalciferol (400 to 600IU) supplements. At the end of the 3-year trial, the patients receiving 60mg/d demonstrated a 2.1% increase in femoral neck BMD compared to the 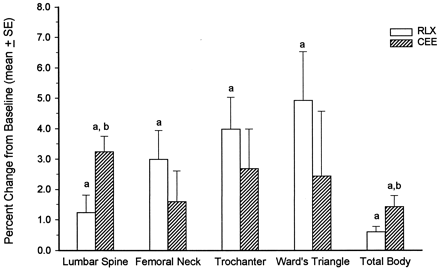 placebo; patients receiving 120mg/d exhibited an increase of 2.4% when compared to the placebo group. The spinal BMD of patients being administered 60mg/d increased by 2.6% when compared to the placebo, while the spinal BMD of patients receiving 120mg/d increased by 2.7% when compared to the placebo group. Prestwood et al10 demonstrated the effects of raloxifene and CEE on BMD when taken separately in a phase II randomized, double-blind study. Over the course of 6 months, 51 Caucasian women who had been postmenopausal for at least 5 years prior to the start of the study were examined. Eligible patients were between 55 and 85 years of age and exhibited a baseline lumbar spine BMD score between 1 SD above and 3 SD below peak bone mass. Patients received either 0.625 CEE (n=26) or 60mg raloxifene (n=25) daily. The study showed a substantial increase in lumbar spine, femoral neck, trochanter, and total body BMD. Theses increases can be seen in Figure 1. Figure 1. BMD changes from baseline of patients receiving 60mg/d raloxifene (RLX) or 0.625mg/d CEE for 6 months. From: J Clin Endocrinol Metab. 2000;85:2197-2202. Bone and colleagues11 researched the efficacy of alendronate, CEE, alendronate and CEE, and a placebo in elevating BMD. A 2-year study including 425 postmenopausal women showed that alendronate when administered daily in amounts of 10mg increased lumbar spine BMD by 6.0%. The lumbar spine BMD decreased by 0.6% in the placebo group. Downs et al12 performed a randomized study of 299 women ranging in age from 45 to 84 who had been postmenopausal for at least 5 years and had been diagnosed with osteoporosis. Researchers administered either 10mg/d of alendronate, 200mg IU/d calcitonin, or a placebo to patients in 24 centers across the United States. BMD increases were observed in patients receiving either alendronate or calcitonin. Patients receiving calcitonin experienced an increase in BMD of 1.18% in the lumbar spine, 0.47% in the trochanter, and 0.58% in the femoral neck. However, more substantial increases were noted in the alendronate group with BMD increases of 5.16%, 4.73%, and 2.78% in the spine, trochanter, and neck respectively. Greenspan and colleagues13 examined the effects of a weekly alendronate dosing on BMD in a 2-year double-blind study. Patients (n=1258) were postmenopausal women between the ages of 42 and 95 and exhibited a lumbar spine or femoral neck BMD t score of -2.5, which is characteristic of osteoporosis sufferers. Patients were randomized to receive 70mg alendronate once a week (n=519), 35mg alendronate twice a week (n=369), or 10mg alendronate every day (n=370). Results indicated that lumbar spine BMD increased by 6.8%, 7.0%, and 7.4% in the group receiving alendronate once a week, twice a week, and everyday respectively. Increases of 4.1%, 4.3%, and 4.3% in total hip 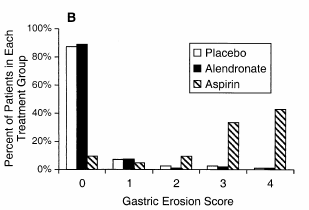 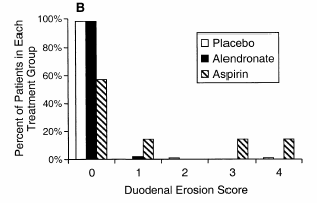 The Deposit Protection Service Terms and Conditions 1. Definitions Wherever the following words and phrases appear in these Terms and Conditions or in the ADR Rules they will always have the following meanings: ADR Procedure means as defined in the ADR Rules which can be accessed at www.depositprotection.com or a copy of which can be requested by telephoning 0870 7071707;