Eradicating Hydra and Other Pests with Flubendazole From: Journal of the American Killifish Association September/October 2003Vol.36, No. 5By Charles Harrison, Ph.D.
This article is first about hydra and its eradication. Secondly, it is about a lot of relief from someof the most hideous afflictions of tropical aquarium fish, including wasting disease, which isoften associated with the presence of Hexamita, a protozoan parasite, and velvet disease, acommon scourge of captive killifish which is associated with the presence of Oodinium orOodinium-like organisms.
My aquariums occasionally have been plagued with hydra during the past 40-plus years of fish keeping. These tiny anemone-like Cnidarians have invaded my tanks when least expected,presumably being introduced along with live collections of native fishes, plants, and live foodorganisms. They eat live foods, such as newly hatched brine shrimp nauplii, and they also eatnewly hatched fry. Furthermore, they just make an aquarium look bad.
In attempting to control or eradicate hydra, I have experimented with copper salts, copper complexes, formalin, and several over-the-counter remedies, including Clout®, Copper Safe®,Fluke Tabs, Boseman’s Solution, and several others. I’ve tried electrocuting them with copperwires and a battery and watched helplessly as the fish died and the plants dropped their leaves.
In the summer of 1999 I published an article entitled “The Hydra Kill” in several hobbyist newsletters. In these I summarized my experimental use of most of these remedies inattempts to eradicate hydra. Not withstanding the damage it caused the fish, plants, and snails, itturned out that formalin was the best hydra killer…the best of the worst, so to speak.
Several people from the AKA’s “KillieTalk” e-mail list recommended Flubendazole for treatment1. Flubendazole is an intestinal worm killer, an anthelmintic or vermicidal drug thatdestroys or dispels parasitic roundworms and tapeworms and seems to be an effective treatmentagainst at least this one Cniderian. The recommended dosage was 1/2-teaspoon of 5% powder in30 gallons of water. This dosage totally wiped out the hydra in about three days…goodbyehydra! The hydra-killing Flubendazole that I used in my office aquarium to eradicate hydra led me to a larger realization. The “wasting” fish in that tank seemed to become cured when I addedFlubendazole to the water. Whoa! This was quite a remarkable revelation. My intent was toremove the hydra and any possible nematodes and, to my surprise, the disease I have found to beassociated with a particular protozoan species was cured.
Recently I have experimented with anthelmintics (de-worming drugs) in general and specifically with Flubendazole. The drug metronidazole (Flagyl®), which is not considered ananthelmintic, is used to systemically treat another infection caused by a flagellated protozoan,Trichomonas. Much of the aquarium literature recommends this drug to treat for Hexamita. Ihave become keenly interested in the Bendazole group of compounds since publication of myarticle on the use of Lavamisole HCl to eradicate Camallanus treatment with in JAKA2.
There is something common in this thread—the protozoans. Both Trichomonas and Hexamita are flagellated protozoa. I have been following some of these little animals aroundsince the 1970s when I worked in Public Health. Hexamita is a relative of Trichomonasvaginalis. They are both pear shaped protozoans with undulating flagella that enable locomotion.
In fish; as long as food passes through the gut and flushes away the Hexamita there is usually noproblem. If, however, the fish has a period of little or no food, hence little or no movementthrough the gut, the infection and irritation flares up. The fish cannot swallow because of theirritation and it just spits out its food. Some aquaria show the infection only after the keeperchanges the food or the feeding regimen, or forgets a water change. Being asymptomatic istypical both in birds and fish. Moreover, aquarium residents don't show the affliction equally. 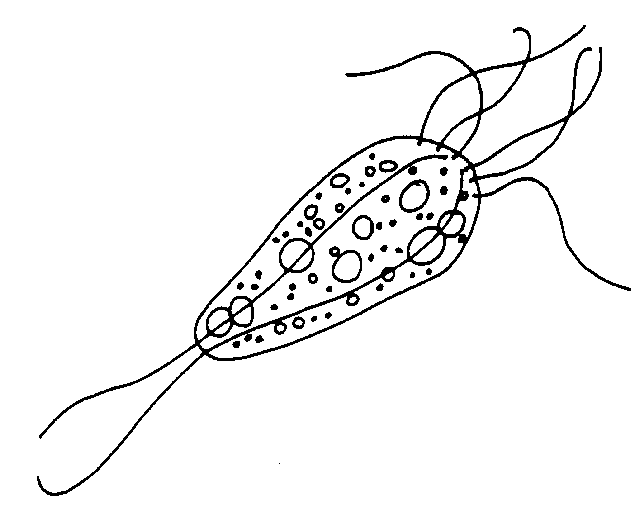 Some never show the symptoms while others in the same tank die of starvation. The merepresence of the protozoan apparently is not the problem…more likely, it is the irritation thatcauses the problem.
Back in 1983 I was desperate with a breeding group of golden pheasant killies, Callopanchax occidentalis. I had been watching members of the group slowly waste away. Therewas nothing I could get them to eat—I tried nearly every thing that would wiggle, swim, orsquirm. Finally I obtained some Flagyl® pills from a doctor friend. I made an aqueous solutionand used a glass eyedropper to squirt a half a milliliter of the solution down the throats of a pairof these fish. The treatment was successful, but this wasn't the first time I had tried to use this asa cure. I have killed numerous specimens with the eyedropper trying to use suspensions ofClout® and Flagyl®. Most of the time I was not too successful. Those that didn't make it wereused for dissection slides. I also sacrificed some of the dying fish and found Hexamita in theirdigestive tracts. These “bugs” were not easy to observe—the contrast isn't very good in the gut ofa fish, considering all of the rest of the stuff that is in there. The movement of the fine hairs onone end of their peanut shaped bodies give the little animals away. They look much the same in apublic health wet slide as they do in the gut of an infected fish, and once you have seen theseflagellated protozoa, you don’t forget.
I took the discovery that Flubendazole could be effective in curing this particular “wasting disease” back to the fishroom at home. I sent a message to “KilleTalk,” that I hadobserved the recovery of a Hexamita-infected orange Aphyosemion australe. I tried this curewith a group of pygmy sunfish, Elassoma. evergladei, of which a few specimens were showinghollow bellies. Three days after dosing of about 1/2-gram of 5% Flubendazole in a 5 1/2 gallontank, I observed the fish picking up brine shrimp and swallowing them. They slowly began to puton weight. They also began to eat grindal worms.
In the fall of 1999 I had another tank containing a group of Rivulus cylindraceus that were showing the same affliction, hollow belly or “wasting disease.” I separated three of theafflicted fish into two different tanks. I treated the tank containing one fish with 0.25 gram of 5%Flubendazole in 2 1/2 gallons of water and started to feed the fish in both tanks newly hatchedbrine shrimp over a period of three days. At the end of that week the fish that had been treatedwas showing significant weight gain while the other two still bit the food then spit it out. Isacrificed one of those and examined its gut under the microscope. Sure enough, I found somesquirming protozoa in the esophagus. I treated the other fish with Flubendazole, as I did the first,and I still have that fish. It has been reproducing ever since.
With the continued thought that Flubendazole not only killed the hydra and was effective against the protozoa Hexamita, I anticipated that this drug could also be effective against theother two common protozoan pests in the aquarium hobby, Oodinium (velvet) andIchthyophthirius (ich). I didn't have a chance to treat either disease until the first part ofDecember 2002. I had neglected a tank of Epiplatys lamottei and to my dismay a coating of velvet enveloped each fish. I had purchased these fish about nine months earlier. While I did notobserve a velvet infection when I purchased these fish, from what I know about this disease, itwould appear that these fish were probably infected with the parasite before I got them. It wasonly my neglect that allowed the parasite to flourish. I treated the tank with Flubendazole in theusual manner, beginning with a complete change of water, then I added 1/4 teaspoon ofFlubendazole (5% powder) to the tank, bubbling and stirring it to dissolve it. I reported myresults in “KillieTalk” in December 2002, to many unbelieving eyes. The parasite dewormerseemed to eliminate the velvet infection in my fish.
While none of the experiments mentioned in this article were performed under scientifically controlled conditions, I believe the results certainly warrant such an investigation.
-------------------------------------------------------------References: Cooper, Barry, Personal communication, April 4, 2002, “KillieTalk.” A Treatment for Camallanus, Charles H. Harrison, Ph. D., JAKA, March/April 1998,Vol. 31, No. 2, pp57-62, and references cited therein.

Induction Rate Doubles as ACOG Issues New GuidelinesMisoprostol should not be used for inducing labor in women with a history of uterine surgery or a priorcesarean delivery, according to new guidelines issued by the American College of Obstetricians andGynecologists (ACOG). Action Points Explain to interested patients that a number of clinical conditions affecting the mother or fetus orboth m