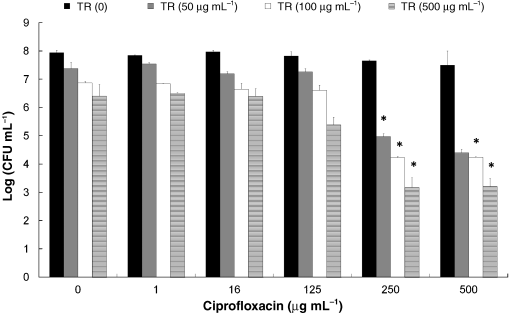 The effect of triclosan and ciprofloxacin in the biofilm cell counts was obtained in the biofilm after 1 h of incuba-tion at 37 1C with the highest concentration used To assess possible synergistic activity, the combination indexes (1000 mg mLÀ1). The MIC of triclosan for planktonic cells (CI) were calculated according to the equation: CI = (D)T/ was 0.5 mg mLÀ1. In biofilms, there was only a 1 log reduc- (Dx)T1(D)C/(Dx)C, where (D)T and (D)C are doses of triclo- tion even with 1000 mg mLÀ1 triclosan at 25 1C as was san and ciprofloxacin in combination, and (Dx)T and (Dx)C described (Tabak et al., 2007), but exposure to 500 and are doses of triclosan and ciprofloxacin that produce x% effect 1000 mg mLÀ1 triclosan at 37 1C resulted in 1.6 and 3 log when used alone. CI o 1, = 1, and 4 1 indicate synergism, reduction, respectively. Because treatments with triclosan at additive effect and antagonism, respectively. The simplest 37 1C were found to be more effective in killing the bacteria, definition for additive effect indicates that the effect of the we continued the experiments at 37 1C. When biofilms were two compounds together is greater than the effect of treated with triclosan followed by ciprofloxacin at concen- each alone, and synergism occurs when the combined effect trations of 50–500 mg mLÀ1 triclosan and 250–500 mg mLÀ1 exceeds that predicted by the sum of the individual actions of ciprofloxacin, a 4–5 log reduction was observed. This reduc- the compounds (Chou, 2006). For each set of experiments, we tion in viability was much larger than the sum of calculated the lowest concentrations that resulted in 90%, 99% both compounds treated alone, indicating a possible synergy and 99.9% reduction. Ciprofloxacin alone at a concentra- (Fig. 1). For example, treatment with 500 mg mLÀ1 triclosan tion as high as 1000 mg mLÀ1 resulted in approximately 80% or ciprofloxacin reduced the CFU by 1.6 and 0.5 log, reduction in the biofilm; thus, (Dx)C was displayed in all respectively. However, the sequential treatment with the calculations as 1000 mg mLÀ1, an assumption that does not same concentration of triclosan followed by ciproflo- affect the conclusions about synergy when the calculated xacin resulted in a 4.8 log reduction of the viable cell count.
CI o 1, because the real (Dx)C would reduce CI even more.
Even lower concentrations (50 mg mLÀ1 triclosan followed by Each experiment was conducted at least three times in 250 mg mLÀ1 ciprofloxacin) resulted in a 3 log reduction, duplicate. Data were analyzed with MICROSOFT EXCEL version 7, which is significantly higher than the effect of triclosan alone and statistically processed using the one-way ANOVA method, and ciprofloxacin alone, each compound at 500 mg mLÀ1 followed by the Tukey–Kramer test. P-values o 0.05 were (P o 0.05). The calculated CI indexes were CI = 0.7 for 90% reduction, CI = 0.32 for 99% and CI = 0.25 for 99.9%,indicating a synergism. This synergy was also observed when the biofilms were treated with triclosan at 25 1C followed bya treatment with ciprofloxacin at 37 1C (data not shown).
Susceptibility of S. Typhimurium in biofilm tosequential treatment with triclosan followed by Susceptibility of S. Typhimurium in biofilms to combined treatment of triclosan andciprofloxacin The minimal inhibitory concentration (MIC) of ciproflox-acin for planktonic S. Typhimurium (wt) used in this study To determine whether triclosan and ciprofloxacin have syner- was 0.125 mg mLÀ1, but a reduction of o 0.7 log of viable gistic activity when they are used together, the experiments Fig. 1. The effect of sequential treatments ofbiofilms of Salmonella Typhimurium withtriclosan (TR), followed by ciprofloxacin onbacterial viability. Biofilms were treated withtriclosan (50–500 mg mLÀ1) for 30 min at 37 1Cfollowed by ciprofloxacin treatment(1–500 mg mLÀ1) for 1 h at 37 1C, and culturablecells were counted. Data are the mean of CFUcounts of three experiments; each experimentwas conducted in duplicate, and bars indicate SD.
ÃSignificant difference (P o 0.05) in thereduction of CFU counts of biofilms treated withtriclosan and ciprofloxacin compared with thereduction in biofilms treated with eachcompound alone at the same concentrations.
 2009 Federation of European Microbiological Societies Published by Blackwell Publishing Ltd. All rights reserved 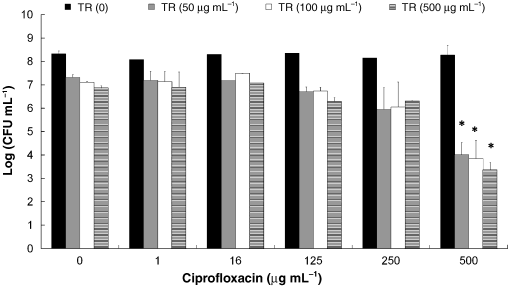 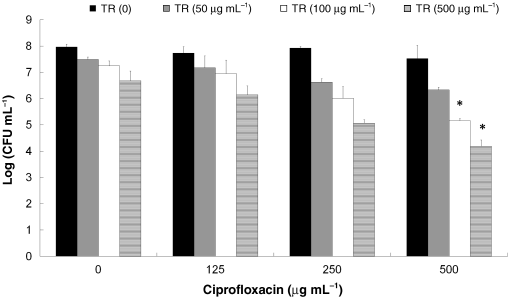 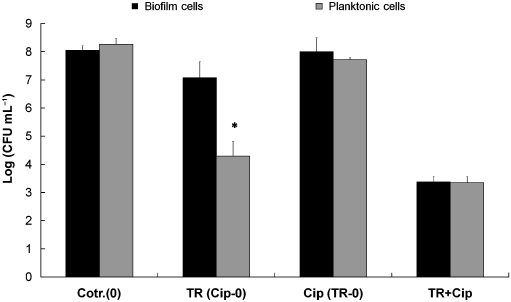