Case 1
Acute Aspirin Overdose:
Relationship to the Blood Buffering System
Focus concept
The response of the carbonic acid/bicarbonate buffering system to an overdose of aspirin is examined.
Principles of acids and bases, including pK and the Henderson-Hasselbalch equation.
The carbonic acid/bicarbonate blood buffering system.
You are an emergency room physician and you have just admitted a patient, a 23-year-old female, who had been hospitalized for psychiatric treatment for the past six months. She was out on a day passwhen she was brought to the emergency room around 9 pm. The patient was disoriented, had troublespeaking, and was suffering from nausea and vomiting. She was also hyperventilating. The patientadmitted to taking an entire bottle of aspirin, which contained 250 tablets. The patient admitted that shetook the tablets around 7 pm that evening. You draw blood from the patient and the laboratory performsthe analyses shown in Table 1.1. The patient is experiencing mild respiratory alkylosis.
Table 1.1: Arterial blood gas concentration in patient
Patient, two hours after
Patient, ten hours after
Normal values
aspirin ingestion
aspirin ingestion
In the emergency room, the patient is given a stomach lavage with saline and two doses of activated charcoal to adsorb the aspirin. Eight hours later, nausea and vomiting became severe, and her respiratoryrate increased; she was in severe respiratory alkylosis, and further treatment was required. You carry outa gastric lavage at pH = 8.5 and administer further activated charcoal treatments, one every 30 minutes.
A bicarbonate drip was required to prevent the blood bicarbonate concentration from dropping below 15mM. Over the next four hours, blood salicylate concentrations begin to decrease. The patient’s bloodpH begins to drop around 24 hours after the aspirin ingestion and finally returns to normal at 60 hoursafter the ingestion. 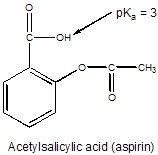