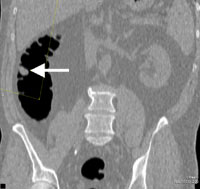 Radiology Rounds
A Newsletter for Referring Physicians
Massachusetts General Hospital
Department of Radiology
CT Colonography – An Alternative to Colonoscopy? Colorectal cancer is the third leading cause of cancer
deaths in both men and women and the likelihood of
an individual developing it some point in his or her life is about 6%. However, early stage colorectal cancer can be successfully treated and the mortality benefit of screening for colorectal cancer is well established. Despite this, fewer than 40% of those for whom screening is recommended comply and only about 37% of colorectal cancers are detected while the Will CT colonography (CTC) be a way to improve the screening rate and reduce the mortality from this disease? A recent large prospective study has demonstrated that it is at least as effective as the current gold standard, optical colonoscopy, for detecting adenomatous polyps (Pickhardt, Choi et al. 2003). At this time, both procedures require preparatory bowel cleansing. However, colonography is a better tolerated procedure that does not require conscious sedation, which is necessary during the optical colonoscopy examination. For this reason alone, the availability of CT colonography may Coronal reconstruction CT colonography image
improve compliance. In addition, in the cases in which The air filled colon appears dark. Arrow indicates 1.5 cm colonoscopy cannot, be completed due to stricture, adenoma. Other soft tissue projections into the lumen of obstruction, or the complex tortuosity of the colon, CT the colon are normal haustral folds.
colonography has been established as the imaging the "advanced adenomas" that represent the primary Perhaps the most important disadvantage of CT target of screening. The currently practiced, though colonography is that any significant findings have to more conservative approach is that lesions somewhat be followed up by optical colonoscopy for polyp less than 10 mm should also be resected, adding removal. Hence, one may ask what the value of the approximately another 10% of screening individuals CTC is when any positive lesion detected by the new who may be referred to colonoscopy. The value of exam will require further referral? It is estimated that colonography is in permitting the large fraction of the six to nine percent of non-symptomatic patients over at-risk screening populace who do not have significant 50 years may be expected to have a polyp greater lesions to avoid the additional risk, discomfort, and than 10 mm in size; lesions of this size range include expense associated with conventional colonoscopy.
In studies that included more than 100 patients, In comparison, studies of back-to-back colonoscopies comparing the detection rate colonography with that of performed on individual patients have demonstrated colonoscopy, the reported per patient performance for miss rates of about 6% for adenomatous polyps equal detection of polyps equal to or greater than 10 mm to or greater than 10 mm (the size above which lesions ranged from 93-100% sensitivity and 80-100% are considered to have a significant risk of harboring specificity. The sensitivity per polyp in these studies malignancy) and 13% for polyps in the 0.6-0.9 mm ranged from 62-90% for polyps equal to or greater range. These miss rates are comparable to results than 10 mm and 16-82% for 6-9 mm polyps. False achieved with state of the art CT colonography, as positive results may occur because of retained stool, diverticular disease, misinterpretation of thick or complex haustral folds, and artifacts due to motion or metal (e.g. hip prostheses). Colonography does, however, have the potential advantage of identifying cancers that may not be adequately assessed by endoscopy, such as those that are located close to Colonoscopy
CT Colonography
Patient preparation
Patient tolerance
Radiation
Complications
Visualization
Optical. Lesions identified by both color Tomographic and 3D reconstruction with Localization
Lesion removal
*Current research is evaluating a procedure that does not require bowel cleansing. Instead, the patient must ingest a contrast agent with meals and snacks for two days. Computer image processing subtracts bowel contents for radiologist to view apparent empty bowel. This technique is currently in clinical trial. 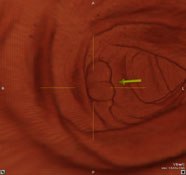 The present CT colonographic procedure requires Please note that CT colonography for cancer screening purgative bowel cleansing with phospho-soda and is not covered by most insurance at this time. CT Bisacodyl (Fleet Prep Kit 1) or polyethylene glycol colonography of asymptomatic patients can be electrolyte solution (NuLytely® or Go-Lytely®). Prior performed at MassGeneral West in Waltham or at to the CT scan, an enema tip or catheter is placed in the rectum and the colon filled with air until the patient reports a full feeling. Few patients report any ( Internal Access Only )
more than minimal discomfort. Both supine and prone CT images are acquired, which means that parts of the colon that are compressed in one position are open in the other. Current multi detector CT scanners Instructions for patients on using the PEG can acquire all the image data in two breath holds, The whole procedure is complete within 15-20 minutes and, since there is no sedation, the patient is able to resume normal activities immediately, before the images are reviewed. The radiologist examines If you have any patients who are interested in being planar images of the entire length of the colon and part of the clinical study of the minimally prepped CTC, computer reconstruction of 3D images are made to which requires both CTC with ingested contrast agent view any part of the bowel from an angle that the radiologist selects. The radiology report is sent to the referring physician the same day of the procedure.
3D reconstruction image of normal colon.
Follow Up and TherapyUnlike colonoscopy, CT colonography is not therapeutic. Therefore, all positive colonography scans must be followed up by optical colonoscopy for polyp removal or by surgery to remove larger masses. It should be noted that the large majority of individuals presenting for colon screening exam do not have 3D reconstruction image of colon.
significant polyps; CT colonography may permit these individuals to avoid endoscopy while correctly and more easily identifying those that require endoscopic or surgical resection. If open surgery is necessary, For further information about CT colonography, please colonography has the advantage of indicating the position of the lesion within the abdomen, making ReferencesFidler, JL, Johnson, CD, MacCarty, RL, Welch, TJ, Levin, B, Brooks, D, Smith, RA and Stone, A (2003). Hara, AK and Harmsen, WS (2002). Detection of flat Emerging technologies in screening for colorectal lesions in the colon with CT colonography. Abdom cancer: CT colonography, immunochemical fecal occult Imaging 27: 292-300.
blood tests, and stool screening using molecular markers. CA Cancer J Clin 53: 44-55.
Gluecker, TM and Fletcher, JG (2002). CT colonography (virtual colonoscopy) for the detection Pickhardt, PJ, Choi, JR, Hwang, I, Butler, JA, et al. of colorectal polyps and neoplasms. current status and (2003). Computed tomographic virtual colonoscopy to future developments. Eur J Cancer 38: 2070-8.
screen for colorectal neoplasia in asymptomatic adults. Gollub, MJ (2002). Virtual colonoscopy. Lancet 360:
Taylor, SA, Halligan, S and Bartram, CI (2003). CT Colonography: Methods, Pathology and Pitfalls. Clin Hardcastle, JD, Chamberlain, JO, Robinson, MH, Moss, SM, Amar, SS, Balfour, TW, James, PD and Mangham, CM (1996). Randomised controlled trial of faecal- Zalis, ME, Perumpillichira, J, Del Frate, C and Hahn, PF occult-blood screening for colorectal cancer, Lancet (2003). CT colonography: digital subtraction bowel 348:1472-7.
cleansing with mucosal reconstruction initial Johnson, CD and Dachman, AH (2000). CT colonography: the next colon screening examination? Radiology 216: 331-41.