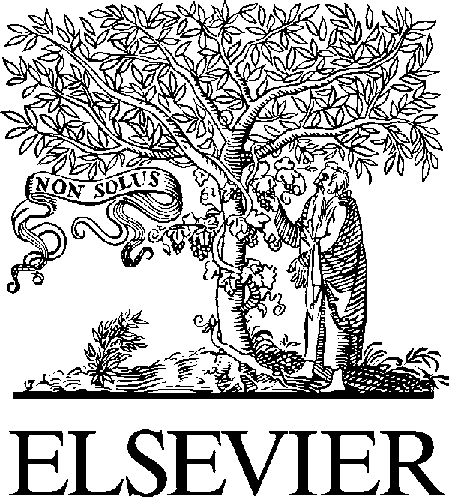 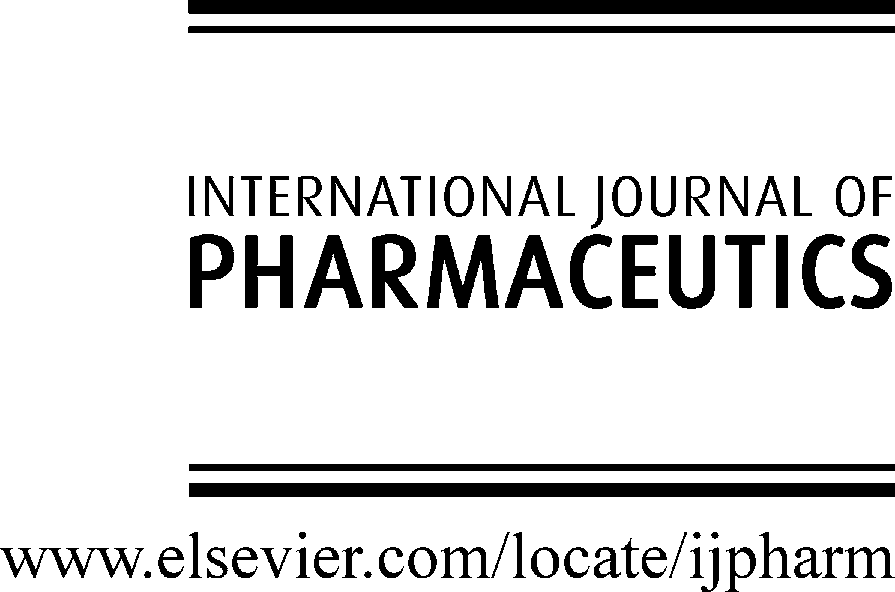 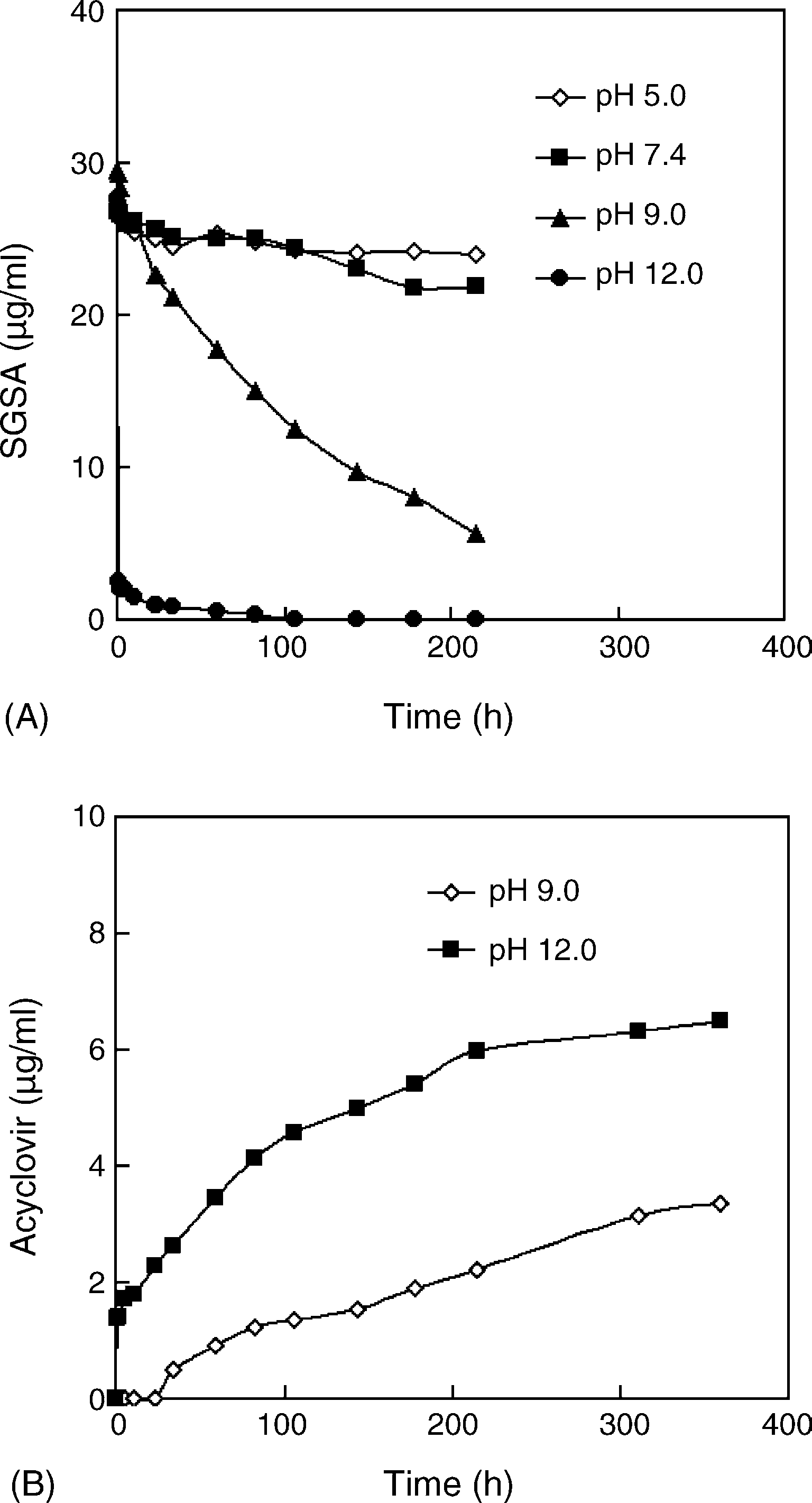 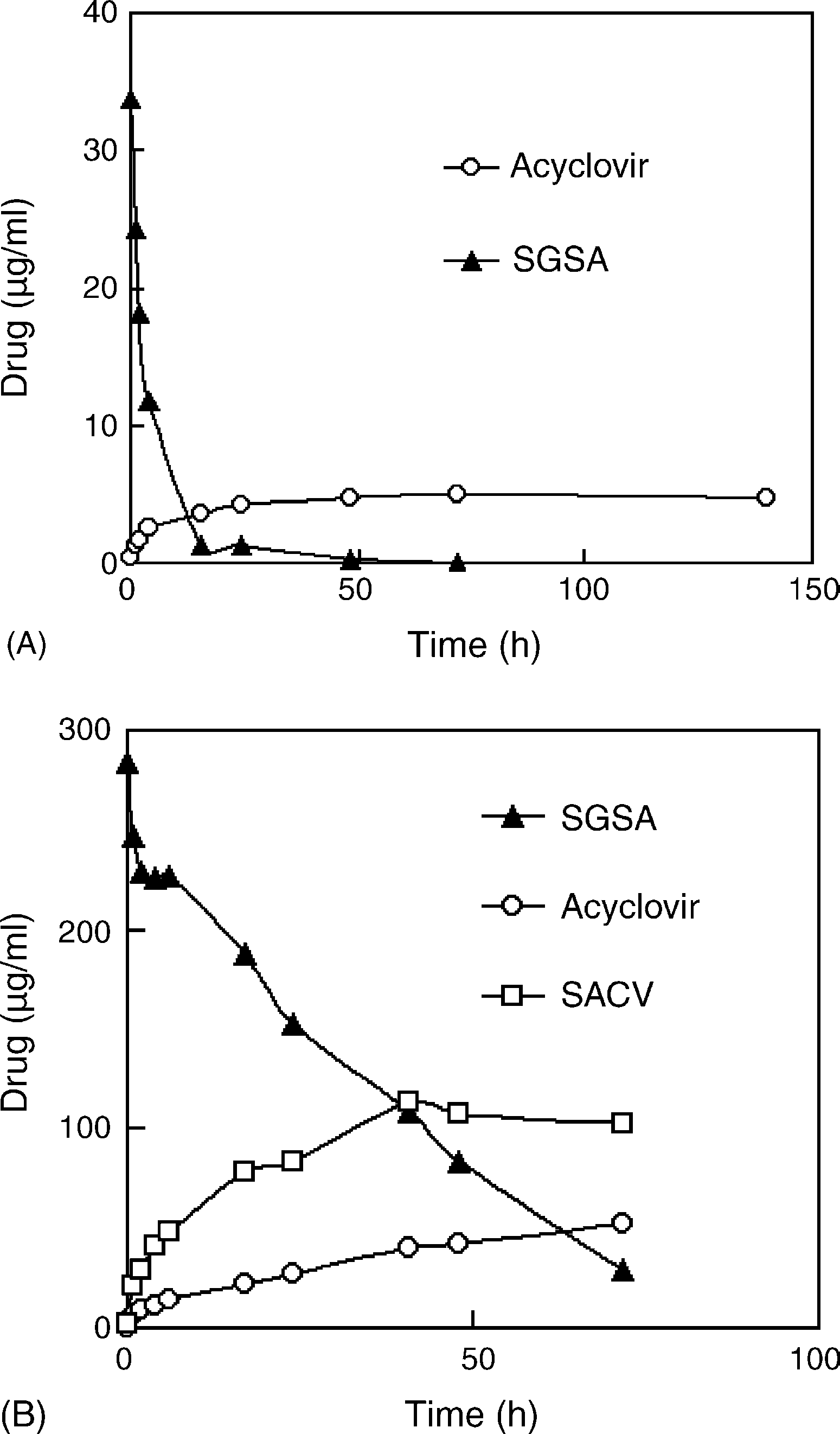 Y. Jin et al. / International Journal of Pharmaceutics 309 (2006) 199–207 The autoclave or the 100 ◦C bath for sterilization neither influ- Interestingly, after SGSA solutions in DMSO were diluted enced the appearance of the SAN nor improved SGSA hydroly- with buffers, SGSA degraded more rapidly than SGSA in SAN.
sis. Therefore, autoclave or 100 ◦C bath is the good sterilization The t1/2 of SGSA in the DMSO/buffers mixtures were 495 h at pH 5.0 (about 1/4 of SGSA in SAN) and 210 h at pH 7.4(less than 1/2 of SGSA in SAN), and disappeared completely within 20 min at pH 12.0. The degradation of SGSA is mainlydetermined by the exposure probability of sensitive ester bonds to water according to the above analysis. The sensitive bonds SGSA in SAN was very sensitive to alkaline solutions (pH of SGSA in SAN are hidden in bilayers. However, when SGSA 9.0 and 12.0), and kept stable in weak acidic buffers (pH 5.0) solutions in DMSO were diluted with buffers, SGSA molecules and neutral buffers (pH 7.4) (SGSA possesses the fell into an irregular state where a lot of sensitive ester bonds carboxylester structure and would like to be hydrolyzed with maybe directly exposed to water and catalyzers. Therefore, it is probably the specific ordered structures of SAN that protect hydrolysis was acyclovir while the possible intermediate SACV hardly appeared, so that the ester bond between succinyl andacyclovir moieties was more sensitive than the bond between 3.2.2. Effects of hydrolase, plasma and tissue homogenates succinyl and glycerol moieties. The pseudo-first order kinetics Hydrolases including carboxylester enzymes exist widely in was used to describe SGSA degradation. The t organism. PLCE, rabbit plasma and rabbit tissue homogenates SAN at pH 5.0, 7.4, 9.0 and 12.0 were 1733, 495, 94 and 21 h, were used to study the enzymatic hydrolysis of SGSA. SGSA in SAN was nearly completely hydrolyzed in PLCE solutions(10 U/ml) after 15 h of incubation at 37 ◦C with the t1/2 of 4.7 h,and the hydrolysis speed was more than 100 folds as rapid asin pH 7.4 buffers (Therefore, SGSA is very sensi-tive to carboxylester enzymes. Also, rabbit plasma hydrolyzedSGSA much more rapidly than pH 7.4 buffers with the t1/2 Fig. 1. The pH dependency of the chemical stability of acyclovir SAN. TheSAN were diluted with different buffers and incubated at 37 ◦C. The bufferswere 20 mM phosphate buffers (pH 5.0 and 7.4) and 20 mM Tris–HCl buffers(pH 9.0 and 12.0), respectively. (A) The degradation profiles of SGSA; (B) the Fig. 2. The effects of: (A) pig liver carboxylester enzyme (PLCE); and (B) rabbit production profiles of acyclovir. The half-lives of SGSA at pH 5.0, 7.4, 9.0 and plasma on the chemical stability of acyclovir SAN at 37 ◦C. PLCE solution 12.0 were 1733, 495, 94 and 21 h, respectively, based on the pseudo-first order (10 U/ml) was prepared with Tris–HCl buffer (20 mM, pH 7.4) before use. The half-lives of SGSA were 4.7 h in PLCE solution and 25 h in rabbit plasma. 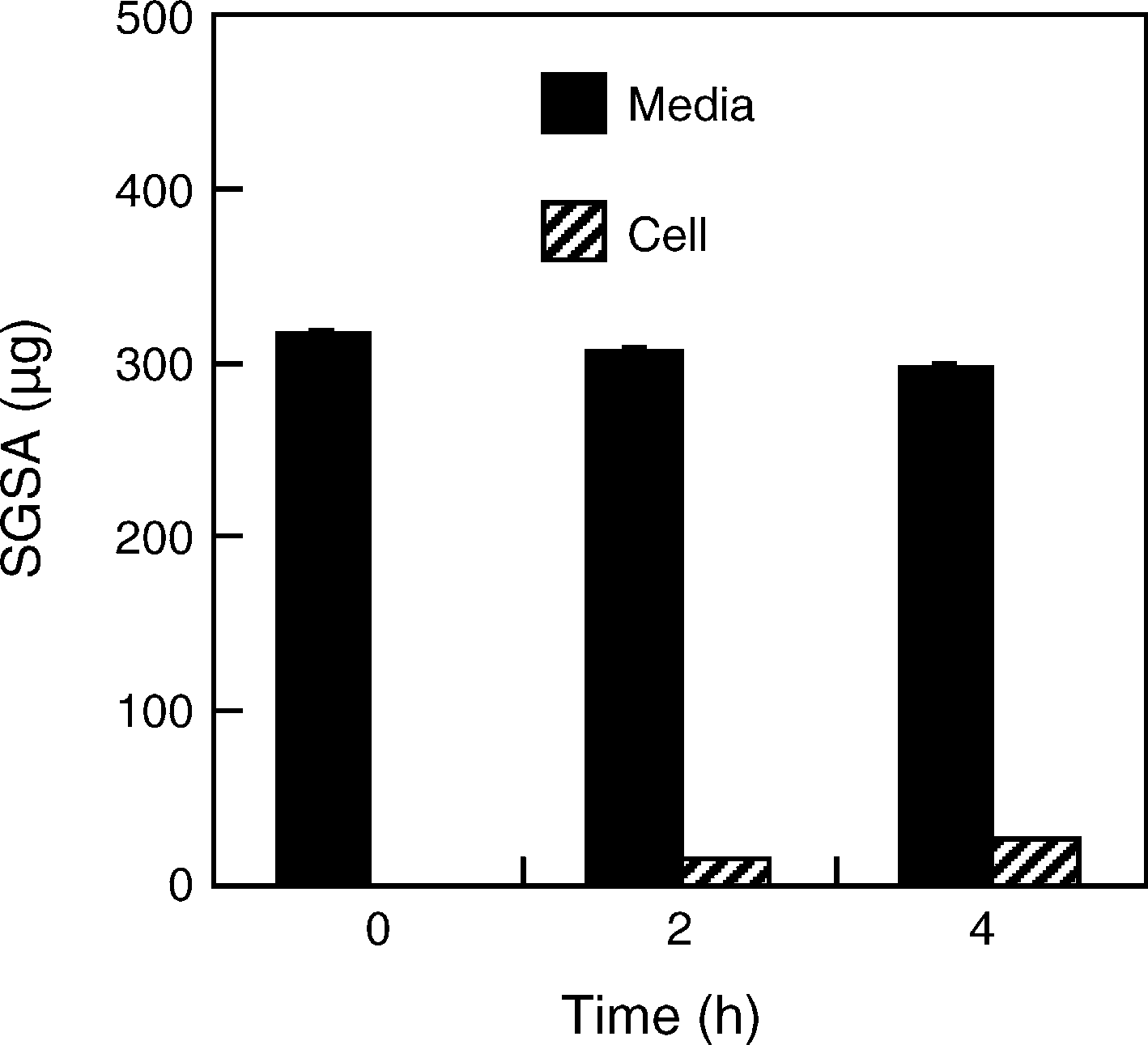 Y. Jin et al. / International Journal of Pharmaceutics 309 (2006) 199–207 of 25 h (Some intermediate SACV appeared in theplasma samples, which indicated that some enzymes in plasmacould hydrolyze the succinyl-glycerol ester bonds of SGSA. Thedegradation of SGSA in rabbit tissue homogenates depended onthe types of homogenates. The degradation t1/2 of SGSA in heart,liver, lung, spleen, kidney and brain were 5.0, 8.7, 11.8, 13.7,30.7 and 73.7 h, respectively, which must result from diverseenzyme activity between tissue homogenates.
Hemolytic phenomena partly appeared with varied extent in the SAN/erythrocyte mixtures after 12 h of incubation at37 ◦C. Both the high-concentration SGSA and the long incuba-tion time improved hemolysis. SGSA of 18 ␮g/ml did not show Fig. 3. The uptake of acyclovir SAN by a macrophage cell line of QXMSC1cells after co-culturing them at 37 ◦C. Results were expressed as the mean ± S.D.
significantly hemolytic action, while marked hemolysis hap- (n = 3). No significant uptake was found.
pened when SGSA in samples was over 36 ␮g/ml. At the sametime, the cell number in the sample containing 18 ␮g/ml SGSAwas 18 × 107, close to the primitive cell number (24 × 107), not show any toxicity even when acyclovir was over 1000 ␮g/ml, while the sample containing 36 ␮g/ml SGSA had 12 × 107 cells.
i.e. 4444 ␮M. Referred to the interaction between SAN and ery- When SGSA of 90 ␮g/ml was in the sample, the cell num- throcytes, the strong cell-membrane insertion of amphiphilic ber was only 3.0 × 107. The concentration ratio of SGSA in SGSA could be the primary reason of cell toxicity cells and solutions (Ccell/Csolution) had positive linear relation- ship with the cell number in samples, i.e. the more cell number The anti-HSV IC50 of SGSA in SAN on Vero cell model was, the more fraction SGSA distributed in cells. When enough was 46.8 ␮M, higher than that of acyclovir (7.1 ␮M). Antiviral SGSA molecules distributed in cells, cell membranes would selection index (SI) was equal to TC50/IC50. The SI of SGSA and like to be disrupted, and then SGSA together with hemoglobin acyclovir were 24 and more than 626, respectively. The above was released to solutions, which resulted in cell number and data just demonstrate that the antiviral activity of SGSA in SAN Ccell/Csolution reducing. The high-concentration SGSA in sam- is much weaker than acyclovir, but whether the in vivo results ples would accelerate and strengthen the process. In the case of 90 ␮g/ml SGSA, Ccell/Csolution were 1.2, compared with 3.3 Acyclovir has to be transformed to its triphosphate in cell of 18 ␮g/ml SGSA. Therefore, it is likely that the amphiphilic plasma to resist HSV. The in vitro anti-HSV action of the SAN SGSA molecules may insert into erythrocyte membranes until demonstrated that SGSA could enter into cell plasma where membrane breakdown like some surface-active chemicals it was hydrolyzed to acyclovir. The degradation of SGSA in Hemolysis did not immediately happen on mixing organism was carboxylester enzyme-dependency (see Section probably because the transfer of SGSA from SAN to erythrocyte Unfortunately, the carboxylester enzyme activity of Vero membranes needed time. Acyclovir solution did not show any cells is low according to the literature ( hemolytic action. Cell-membrane insertion would give SGSA a In fact, some prodrugs of antivirals show strong antiviral action in vivo but weak activity on cell model because the enzyme Surprisingly, SAN seemed to have no hemolytic effect on activity in vivo and in vitro is significantly different ( whole blood. When the additional SAN was less 10% (v/v) of For example, a good antiviral famciclovir (a rabbit whole blood, no hemolysis happened even though SGSA prodrug of acyclovir) do not show any anti-HSV action on Vero in the sample was near to 1000 ␮g/ml. However, as soon as the additional SAN or water was over 10% (v/v) of whole blood,hemolysis preferred to happen. Obviously, the hemolysis ofwhole blood was just relevant to the descent of osmotic pres- sure of samples. The binding plasma proteins would markedlyreduce the interaction between SAN and erythrocytes, and the QXMSC1 cells are established from murine marrow and binding action also named opsonization would lead the uptake show phagocytic ability (The uptake of acy- of SAN by the mononuclear phagocyte system (MPS) in vivo clovir SAN by QXMSC1 cells was not significant (The in vitro uptake of no-ligand modified liposomes by macrophages is not significant too (However, afterbeing modified by ligands such as mannose residues and serum 3.4. In vitro toxicity and antiviral activity of SAN poteins (opsonins), the liposomes or the nanoparticles can bemarkedly trapped by macrophages Acyclovir SAN showed weak toxicity to Vero cells. TC50 of SGSA was 750 ␮g/ml, i.e. 1126 ␮M. Acyclovir solutions did 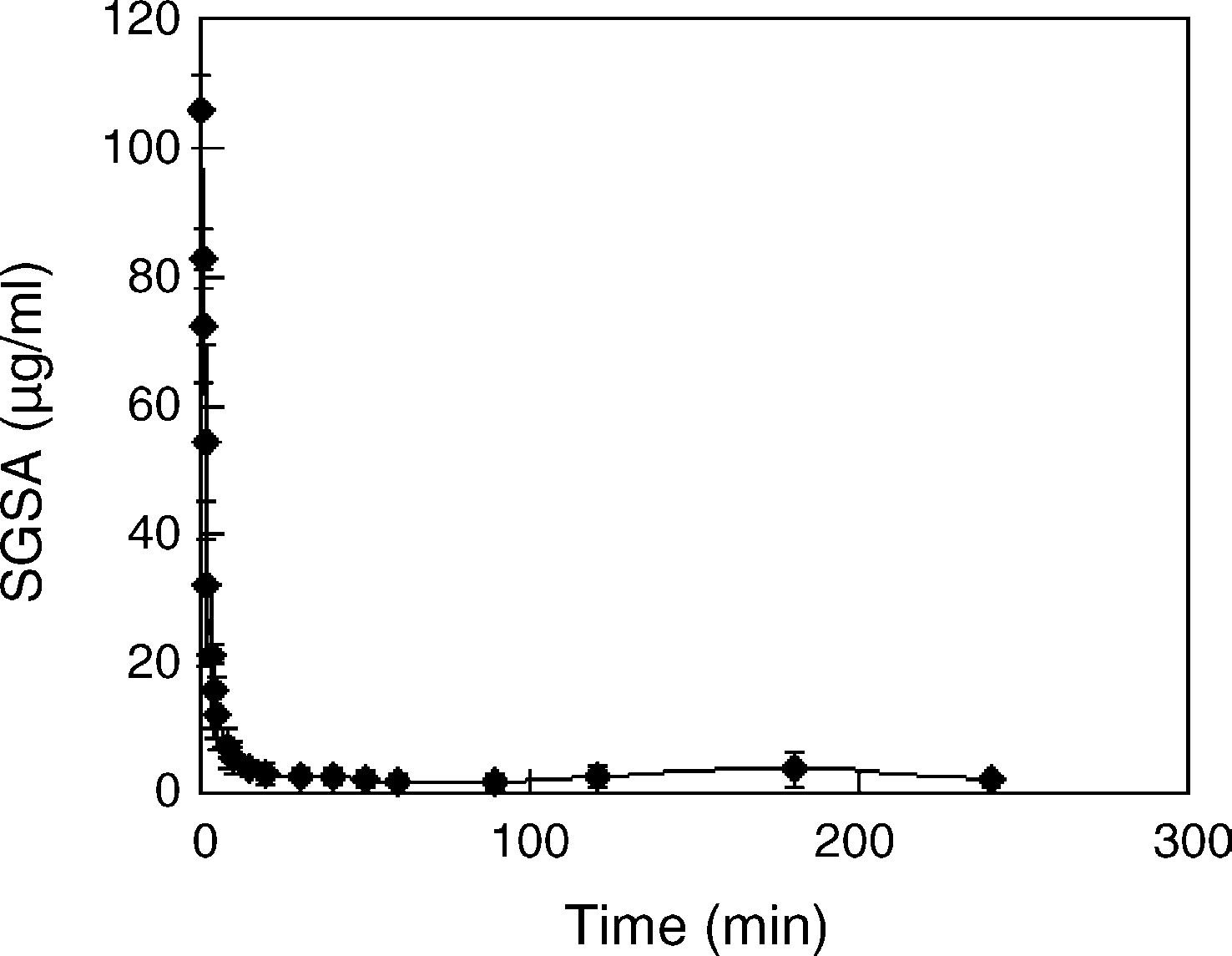 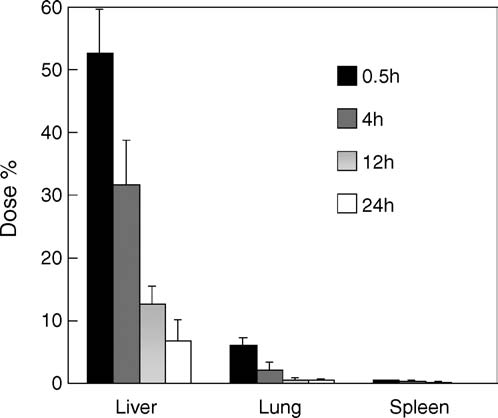 Women Realise Anaemia Can Be Treated Haemoglobin Levels Improve Through this intervention, more than a thousand women understood that theAfter six months of nutritious food and herbal treatment there was anweakness’ they experienced could be treated. They were able to examine theimprovement of up to two gram percentage in the haemoglobin level of 80 percentpallor of their eyes an