'origami, eleusis and the soma cube' 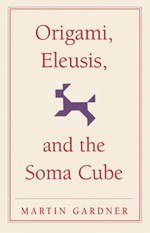 1997−2009, Millennium Mathematics Project, University of Cambridge.
Permission is granted to print and copy this page on paper for non−commercial use. For other uses, including
electronic redistribution, please contact us.
'Origami, Eleusis and the Soma Cube'
reviewed by Charlotte Mulcare
Origami, Eleusis and the Soma Cube: Martin Gardner's
mathematical diversions
by Martin Gardner
I would guess that, even a decade ago, the phrase "mathematical recreation" would have been considered acontradiction in terms. Now, in the age of compulsive Sudoku puzzlers, and an increasing canon of popularmathematics books, this descriptor has become credible. Numerical teasers that would have once beenconsidered painfully reminiscent of school are now found in Sunday supplements, and logic problems, oncethe bastion of IQ tests, are now mainstream publishing fodder. To anyone with a mathematical leaning, thisredress of the age−old imbalance between arts and science in popular culture is nothing short of miraculous.
As one of the long−standing advocates of mathematics for pleasure, Martin Gardner has contributed over 60books encouraging readers to play with maths. Origami, Eleusis and the Soma Cube provides a respectableaddition to this bibliography.
There are a few things worth−while knowing before approaching this book: first, it is a collection ofstand−alone articles taken from the Scientific American. Martin Gardner provided a monthly supply ofconundrums and explorations in mathematics over twenty−five years, and this book represents a carefully selected smorgasbord of these pieces. In fact, this book is part of a new and updated edition ofthat, because of the book's structure, you may well wish to dip in and out rather than attempting (as I, perhapsfoolishly, did) to read it from start to finish. A chapter entitled Origami is curiously frustrating if you lack therequisite pieces of paper to experiment with, one has to be in the right mood for tetraflexagons, and the articleon recreational logic should not be attempted with a hangover. Armed with this knowledge, I recommend youapproach this book on a Sunday afternoon, with paper and pen, a few biscuits for brain−power and a goodhour to spare for puzzling. It is worth it.
The book spans the usual suspects for a collection of mathematical problems: a chapter on mazes relatesHampton Court Palace to the intricacies of human psychology and computer design. Magic squares,probability and the golden ratio also undergo a thorough investigation. What makes the author's approachdifferent is the level he writes to: these puzzles are aimed at readers with a deeper understanding of mathsrather than a dabbler. As with many popular maths writers, Gardner places his puzzles in context, referencingboth historical background and speculating as to current and future developments in the field. However,unlike most writers, Gardner's asides are ruthlessly succinct, and the main focus remains, rightly, on the mathsitself. The sums are notably harder a chapter describing the works of "England's Greatest Puzzler" deservesits title, and an article on nine problems was satisfyingly problematic. Answers are helpfully given at the endof each chapter, with workings shown, so it is both possible and enjoyable to give yourself the challenge ofsolving each puzzle without worrying that spoilers will emerge in the main text, or that you'll be left missingthe point. The bibliography at the end of each chapter is not merely a reference list to support the text, but awell−considered introductory reading list for readers particularly enthused by a given topic.
There are several repercussions to collating articles for a book rather than starting with a blank slate: one ofthe downsides is that the writing style differs significantly between them. This is understandable, given thatthe time frame for article selection spans 25 years, but it can be disorientating. When picking up a collectionof short stories, you would nevertheless expect some theme to unite them, and many popular mathematicsbooks maintain a cohesive flow, despite disparate topics in each chapter. Further editing may have enabledmore read−across between chapters, and perhaps a better order for content, but this may well be a matter ofpersonal preference.
On the positive side, retrospective publication enables Gardner to add addenda to each chapter, in which herelates some of the feedback received from his readers. There is something incredibly likable about an authorwho is prepared to reveal when his audience proposes a new angle he hasn't considered, and the maths isinvariably enriched by his responses. Also, the intended readership of Scientific American means that theorientation is towards a scientifically minded audience; although popularising maths can only be a wonderfulthing, it is also good to see a book pitched at those already convinced.
Gardner has certainly justified his position as a proponent of recreational maths the emphasis of the book isclearly audience participation, and maths fiends will find the level stimulating, and the choice of topic broad.
Book details:
Origami, Eleusis, and the Soma CubeMartin Gardnerpaperback 246 pages (2008)Cambridge University PressISBN−10: 0521735246ISBN−13: 978−0521735247 You can buy the book and help Plus at the same time by clicking on the link on the left to purchase from amazon.co.uk, and the linkto the right to purchase from amazon.com. Plus will earn a small commission from your purchase.

About the author
Charlotte Mulcare read biological anthropology at Cambridge, and has recently completed a PhD atUniversity College London in human genetics. The project used DNA samples from modern populations totrace the migration and selection patterns in Neolithic farmers. She currently works as a science writer (factand fiction!) and lives in Oxford.