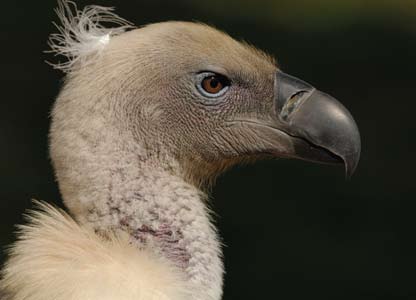 Painkillers are the most widely used drugs in the treat- ment of livestock. Across India, Pakistan and Nepal, vultures were exposed to one such drug, diclofenac, while at carcasses of animals treated with the drug shortly before death. Diclofenac, which causes gout and renal failure, is highly toxic to Gyps vultures and has led to a precipitous tim jACkson
decline of more than 99 per cent in populations of three Gyps Researchers fear that African vultures, such as the Cape Vulture,
species since the 1990s (see box below). could potentially be as much at risk from diclofenac as Asian
Diclofenac is a non-steroidal anti-inflammatory drug vultures.
(NSAID) that is licenced as a veterinary medicine in at least 15 African countries, leading to concern about its effects on the scavenging behaviour of vultures; in India, for instance, vultures across the continent. Presently it is not widely used researchers from the Peregrine Fund identified a positive role in Africa, although fresh concerns over its availability were for restaurants, by reducing the foraging area of vultures and raised following its discovery on sale at a veterinary practice therefore the likelihood of their feeding on contaminated in Tanzania in 2007, raising fears that it could become estab- Recently, the University of Pretoria collaborated with the Clinical trials and records from captive-breeding pro- Rhino and Lion Foundation (www.rhinolionconservation.co.za) grammes show diclofenac and several similar NSAIDS are to establish the Vulture Programme. With support from WWF toxic to African scavengers, including Gyps vultures (Cape, South Africa (www.wwf.org.za), the programme received a sig-White-backed and Rüppell’s) and Marabou Storks. There are nificant boost for vulture conservation through a sponsorship obvious concerns for other vultures too, including the endan- deal from agricultural services group AFGRI, which provides gered Egyptian and vulnerable White-headed and Lappet- animal feeds to some 23 000 farmers in South Africa.
faced, for which there is no clinical information. The sponsorship will allow the programme to address four In South Africa, conservation-minded farmers donate car- key objectives. The first of these will focus on the impact on casses for vultures to feed on, and there are some 236 of these vultures of lead and veterinary chemical residues in livestock. vulture restaurants across the country. Although restaurants The second will use GPS/GSM telemetry and tagging to evalu-appear to be beneficial to vultures, the South Asian crisis ate spatial use by vultures, while the third is an awareness has heightened awareness about the levels of potentially and education campaign involving birders, who will be asked toxic veterinary chemicals in carcasses, while raised levels to report sightings of marked and tagged vultures. The final of lead in several birds at vulture restaurants have recently objective is the development of a bank of biomaterials, such as been reported in South Africa. Restaurants may also affect tissue and feathers, for ongoing conservation research.
Asian vultures will be extinct in the wild and constructing three additional captive- millions in the 1980s. Populations of Indian breeding centres is the only way to save the and Slender-billed vultures have dropped to taken to eliminate the livestock drug that has birds. Manufacture of the veterinary form of around 45 000 and 1 000 birds respectively.
caused their catastrophic decline, a newly the drug as an anti-inflammatory treatment for livestock was outlawed in India in 2006, diclofenac from the vultures’ food supply and but it remains widely available. In addition, to protect and breed a viable population in White-rumped Vultures Gyps bengalensis is diclofenac formulated for humans is being captivity,’ said lead author, Dr Vibhu Prakash, dropping by more than 40 per cent each year of the Bombay Natural History Society (BirdLife in India, where it has plunged by 99.9 per cent since 1992. Numbers of Indian G. indicus the Bombay Natural History Society, states and Slender-billed G. tenuirostris vultures that White-rumped Vulture is now in dire few hundred birds, or less, across the entire combined have fallen by almost 97 per cent straits, with only one thousandth of the country and thus be functionally extinct in less 1992 population remaining. The researchers than a decade, unless the use of diclofenac in believe that numbers of the species in India retail sale of the veterinary drug diclofenac could now be down to 11 000, from tens of BIRDlIFe InTeRnATIOnAl
j u n e / j u l y 2 0 0 8
B I R D I n G B R I e F S