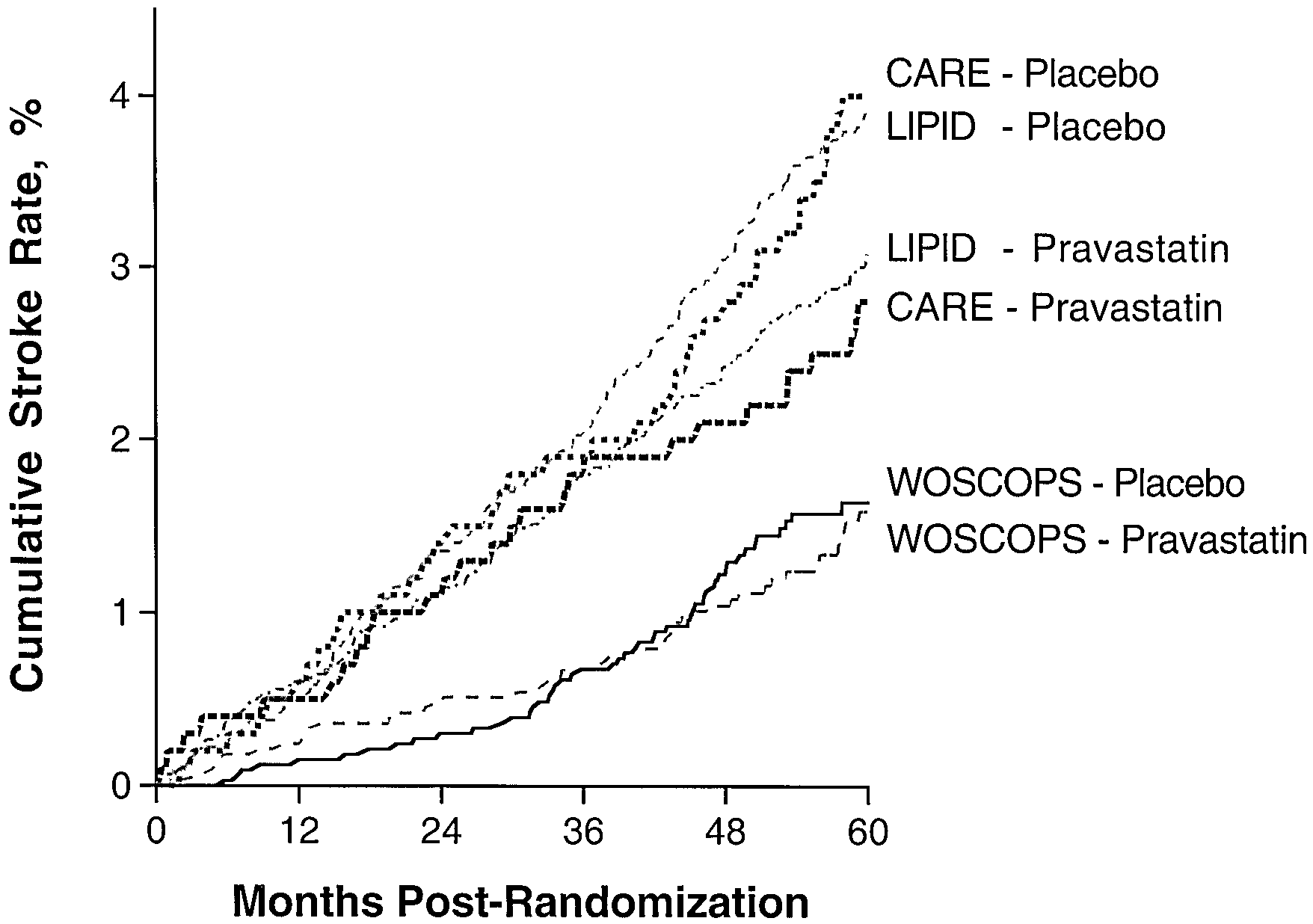 Byington et al
Pravastatin and Stroke
389
Effect of Pravastatin on Stroke Events
*From proportional hazards model.
†From log-rank model, reported only for “total stroke.” The effects of pravastatin on all stroke events occurring no clear overall benefit attributable to pravastatin. Among the during the entire follow-up period are presented in Table 2.
2 secondary prevention trials (CARE and LIPID), the stroke Overall, 598 of the participants had a fatal or nonfatal stroke rates were generally consistent, both in terms of the long-term during follow-up. More than half of these were from LIPID, absolute risks of stroke and the benefit attributable to prava- although LIPID and CARE had similar placebo group event statin. Figure 2 presents the cumulative treatment-specific rates (8.0 and 7.6 strokes ⅐ 1000 patientsϪ1 ⅐ yϪ1, respectively).
stroke curves for the combined CARE and LIPID population, WOSCOPS had the fewest strokes and the lowest rate of in which it is noted that the curves diverge after 1 year of strokes. Each trial individually demonstrated a reduction in total stroke, although the CI for the WOSCOPS hazard ratio The effect of pravastatin on total stroke was examined in was large and crossed 1.00 (Table 2, top). CARE had a 32% various baseline subgroups in the combined CARE/LIPID reduction (4% to 52% reduction) and LIPID had an 18% group. The beneficial effect of pravastatin in reducing strokes reduction (0% to 33% reduction). Combining all 3 trials was evident and consistent across subgroups (Figure 3).
resulted in a 20% reduction in total stroke with pravastatin There was no evidence of a statistical interaction (at PϽ0.05) (7% to 32% reduction, Pϭ0.01). This difference in totalstrokes was maintained if WOSCOPS was removed from thecalculations: CARE and LIPID combined had a 22% reduc-tion (7% to 35% reduction, Pϭ0.01). In the combinedCARE/LIPID database, it was estimated that 588 patientswould have to be treated per year to avert 1 stroke event; inWOSCOPS, 3333 patients would have to be treated.
About 90% of the strokes were nonfatal (Table 2, middle), and there was an overall 24% reduction in nonfatal strokeattributable to pravastatin. This treatment benefit on nonfatalstrokes was maintained when only the 2 secondary preventiontrials are combined. Less than 10% of the strokes reported inthe trials were fatal (Table 2, bottom).
Figure 1 presents the cumulative fatal/nonfatal stroke curves. There was no statistical evidence that the proportionalhazards assumption was violated. Event rates in the primary Figure 1. Occurrence of any stroke (fatal or nonfatal) by clinical
prevention trial (WOSCOPS) were consistently lower, with 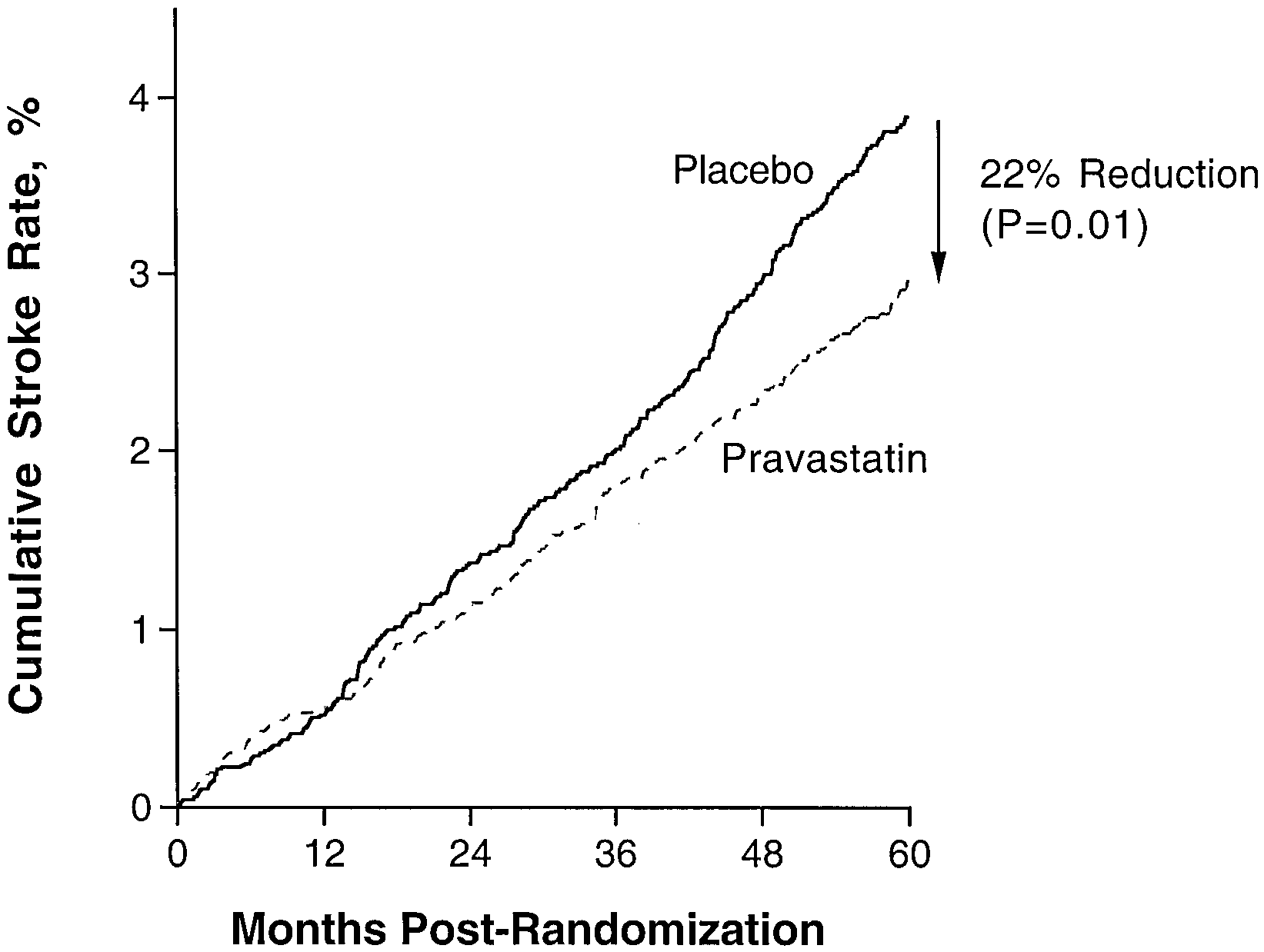 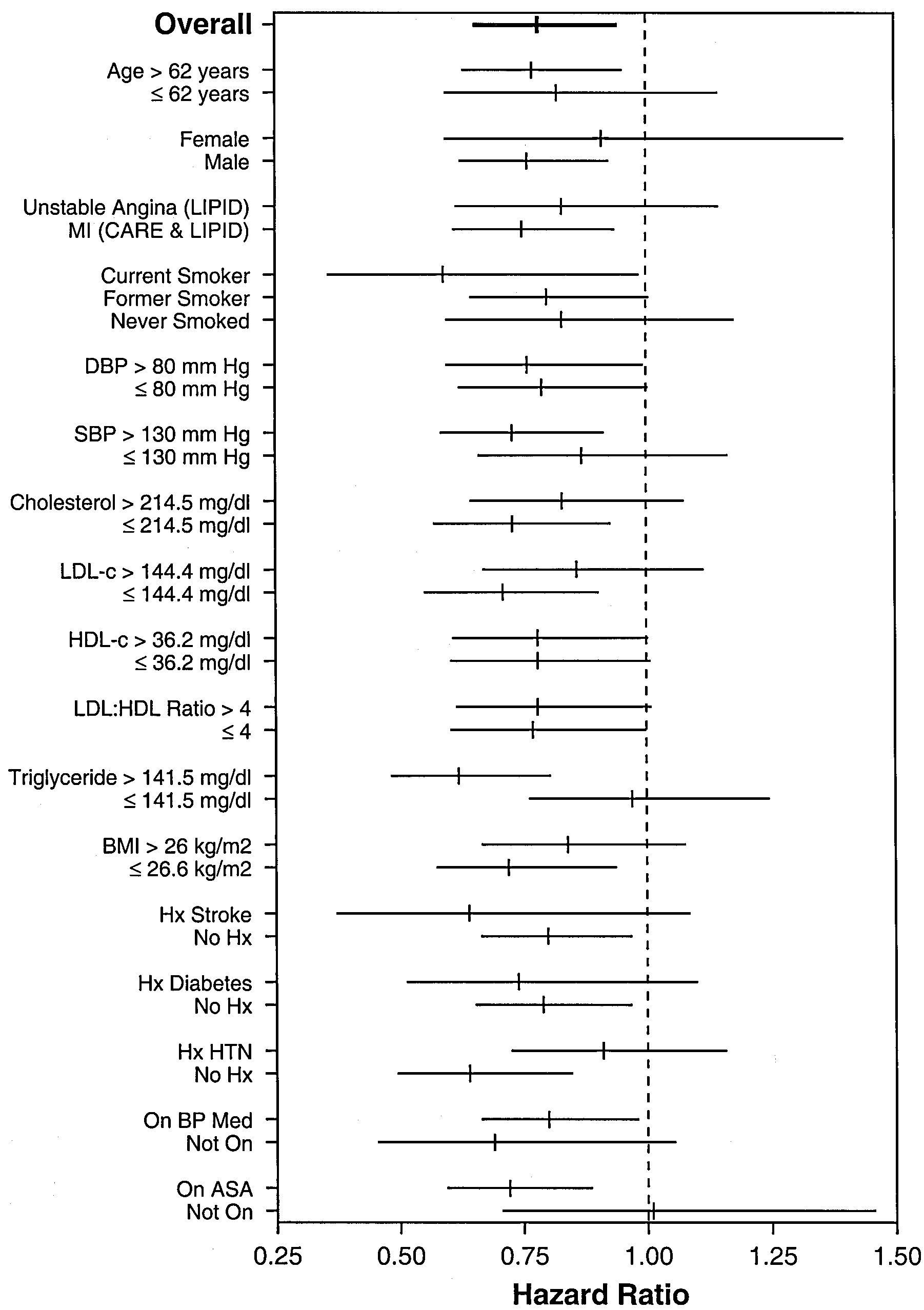