Purpose – To learn how to synthesis organic compound such as aspirin and determine the purity of aspirin.

Organic Chemistry is the study of compounds containing carbon. There are millions of organic compounds
known because carbon atom has the unique ability to bond to other carbon atoms to from large molecules. In
these compounds, carbon may be bonded to other carbons via single bonds, double bonds, and/or triple bonds.
Other elements such as oxygen and nitrogen are also oftentimes present. To study the vast array of structures,
the compounds have been organized into families, or functional groups, according to common features.
Functional groups have characteristic properties and they control the reactivity of the molecule as a whole. Two
such functional groups are briefly discussed below.
Alcohols represent a class of organic compounds that contain the hydroxy group, -O-H. The OH group is
characteristic of alcohols and the structure of any alcohol includes the -C-O-H bond.
Carboxylic acids represent another class of organic molecules. The characteristic functional group of a
carboxylic acid is a double-bonded oxygen and a hydroxy group bonded to the same carbon atom. This can be
represented as –COOH.
Aspirin, or acetyl salicylic acid, belongs to a group of organic compounds known as esters. Aspirin is an
analgesic (painkiller), an antipyretic (fever reducer), and an anti-inflammatory agent. It is the premier drug for
reducing fever, a role for which it is uniquely suited. As an anti-inflammatory, it has become the most widely
effective treatment for arthritis. Patients suffering from arthritis must take so much aspirin (up to four grams
per day) that gastric problems may result. For this reason, aspirin is often combined with a buffering agent.
Bufferin is an example of such a preparation.
Esters are the most common derivatives of carboxylic acids. The general formula for an ester is RCOOR' and
its molecular structure is shown below. R may be hydrogen or an alkyl group. R' (we add a prime (´) to
distinguish groups that differ in structure from another) may be an alkyl group, but not a hydrogen atom.
Esters are particularly widespread in nature, contributing especially to the pleasant flavors and aromas of many flowers and fruits. Esters are most commonly prepared by the reaction of a carboxylic acid with an alcohol in the presence of catalytic amounts of a strong inorganic acid, such as H2SO4. This reaction is shown in equation (1) and is also known as esterification. An esterification is always accompanied by the formation of water. In the formation of an ester, the hydroxyl group of the acid (not of the alcohol) is lost to form water. Carboxylic acid + Alcohol Æ Ester + Water The reaction is an equilibrium reaction; thus it is said to be reversible. Typically, pseudo first order reaction conditions are used by reacting an excess of alcohol with the carboxylic acid, which will drive the reaction to completion. The limiting reactant therefore is the carboxylic acid. Aspirin, the salicylic ester of acetic acid, is prepared by the reaction of salicylic acid with acetic acid, as shown in equation (2): (2) alicylic acid + Acetic acid Æ Acetyl salicylic acid + Water In today’s experiment, we will be using acetic anhydride, (CH3CO)2O, instead of acetic acid. This reaction is shown in equation (3). Acid anhydride, which is made by the removal of a water molecule from two acetic acid molecules, reacts with alcohols in much the same way as acids to form the ester. Drug manufacturers prepare aspirin from salicylic acid by this method, which is a much better synthetic method than shown in (2). Using an excess of acetic anhydride has the advantage that the water that is produced by the reaction will react immediately with acetic anhydride. This will shift the reaction to the right, improving the yield of aspirin in the reaction. Second, unwanted side reactions are controlled well. In both reactions, a catalyst, normally sulfuric acid or phosphoric acid, is used to increase the reaction rate. Salicylic acid + Acetic anhydride Æ Acetyl salicylic acid + Acetic acid 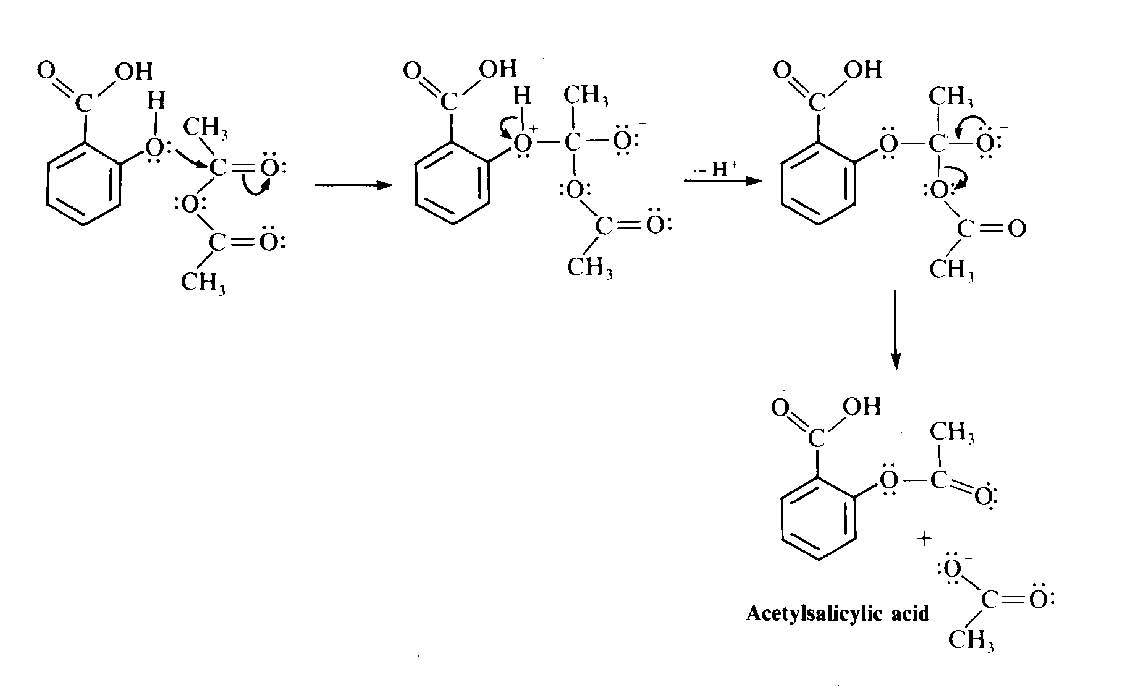 Salicylic acid
Acetic Anhydride
Acetyl salicylic acid (aspirin)
Reaction mechanism – Below is the detailed mechanism showing how phosphoric acid catalyzes the formation
Organic reactions seldom yield pure substances. In many instances, several reactions proceed simultaneously
and mixtures of products result. Likewise, the reaction may be incomplete, and a portion of the starting
material will be present in the product. It is for these reasons that one needs to purify the product.
Recrystallization is a method of purification based on solubility of substances. Ideally, it is the dissolution of
impure crystals into a hot solution and, upon cooling, the collection of the pure component crystal’s. In today’s
experiment, you will purify aspirin by this method.
You will also determine the melting point of aspirin. Melting points are determined for several reasons. If a
compound is a known one, the melting point will help to characterize the compound in hand. The melting point
is the temperature at which the solid coexists in equilibrium with the liquid at atmospheric pressure. Most pure
organic compounds have sharp melting points; that is the process of melting occurs over a very narrow range of
temperature. Impurities have a dramatic influence on the melting points of organic compounds. They typically
lower the melting point and widen the melting point range.
For example, while pure salicylic acid melts sharply at 157 – 159 oC, a sample of wet salicylic acid (water is
the impurity) may melt in the range 145 – 155 oC. A melting point range larger than 3 oC is an indication that
the sample is either impure or wet.
Data Collection

Determine the mass of the crude aspirin before and the mass recrystallization, and then calculate your percent
yield of the pure product. Measure the melting point of your pure sample and compare the number you obtain
to that found in the CRC (Literature value). Repeat if necessary.
Procedure

Dry a 125-mL Erlenmeyer flask. Weigh out, to the nearest 0.01g, about 2 g of salicylic acid. Record the weight
in the data sheet and add it to the Erlenmeyer flask. Measure out 5.0 mL of acetic anhydride in a graduated
cylinder and pour it into the flask containing the salicylic acid. Record the exact volume in your data sheet.
Swirl the flask to dissolve or thoroughly wet the crystals of salicylic acid. There should be no visible reaction at
this point. Carefully add 5 drops of 85 % phosphoric acid.
Swirl the flask continuously for about five minutes. Set up a warm water bath. Clamp the flask in a beaker of
water. Heat the water on a hot plate to about 70 – 80 oC, stirring the liquid in the flask occasionally. Keep the
reaction mixture at this temperature for about 15 minutes. After 15 minutes, very cautiously, add drop by drop,
2 mL of deionized water to decompose any excess acetic anhydride. Some vapor will escape the flask. Avoid
breathing the vapors as they contain acetic acid. At this point you should have a solution in your flask.
Remove the flask from the hot water bath, add 20 mL of water while still warm, and swirl the flask to mix
thoroughly. Let stand for a few minutes. Upon cooling, aspirin should begin to crystallize from the solution.
Put the flask in an ice bath and leave it in there for about 10 minutes. During this time, aspirin crystals will
form.
The aspirin will be vacuum filtered. Transfer the precipitate to the Buchner funnel. Remove any remaining
precipitate in the Erlenmeyer by adding small 2 mL of ice cold water to the flask. Use a rubber policeman to do
so. Use 3 mL ice cold water to wash the crystals. Draw air through the funnel to dry the precipitate. Place your
substance on a paper towel (watch glass) and let it dry completely. When dry, weigh to the nearest 0.01g and
report in your data sheet. Calculate your percentage yield using this mass as your actual yield.
II. Recrystallization (if time permits)

Transfer all the crystals that you have prepared into a 100-mL beaker. Add just enough 95% ethanol (about 5 to
10 mL) to dissolve the crystals, warming gently to aid in this process.
Note - Acetylsalicylic acid melts with decomposition at temperatures reported from 128 to 137°C. If necessary
it may be recrystallized from either water or an ether/hexanes mixture. Boiling water hydrolyzes aspirin, but
the reaction is not rapid; therefore, the product may be quickly recrystallized from a small quantity of very hot
water. It can also be recrystallized from diethyl ether (use the wet ether found in a supply bottle in each hood)
plus hexanes. Keep adding diethyl ether until you do not see any more particles. Then you will want to add an
equal volume of hexanes. Then you should let the solution stand undisturbed in an ice bath.
Waste Disposal

Place the capillary tubes in the broken glass container. The aspirin and the contaminated filter paper should be
placed in the solid waste container.

1. What are esters? What is one general physical property of esters?
2. Suggest two chemical reasons for the fact that the yield of aspirin is not 100 %.
3. The melting point of the crude aspirin was measured to be 128 °C. What does it indicate about the purity of
the product?

4. Give the structural formulas for the following compounds.
a) Phenyl salicylate
5. Calculate the theoretical yield of aspirin to be obtained when 2.0 g of salicylic acid and 5.0 mL of acetic anhydride (density = 1.08 g/mL) are mixed together. (Molar masses: acetic anhydride = 102.1 g/mol; salicylic acid = 138.2 g/mol) Post-Laboratory Questions–EXP 9 Name:
Synthesis of Aspirin - Esterification
Due after completing the lab.
1. If you heat too fast, will your observed melting point be higher or lower than the true value? Explain.


2. Write a balanced equation for the neutralization of acetylsalicylic acid with a strong base such as NaOH.
3. Show a reaction, which illustrate the hydrolysis of acetylsalicylic acid.
4. If 1.6 g of aspirin were obtained from 1.6 g of salicylic acid by reaction with excess acetic anhydride, what
would be the percentage yield?
5. Write the structure of the products that you would expect from the following reactions. Please write a
complete reaction for each.

Guideline Number 7: February 2011 Use of SERMs in Menopause Background Apart from the uterus and breasts – the main reproductive organs, oestrogen also acts on other tissues of the liver, brain, heart and bones. It acts on target tissues by binding to the oestrogen receptors which are located in the cell nucleus. The estrogen-receptor complex then binds to specific DNA sites and t