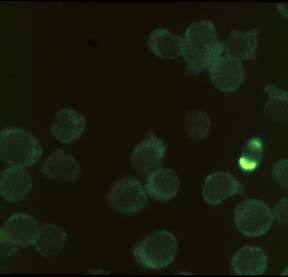 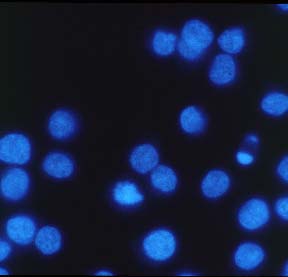 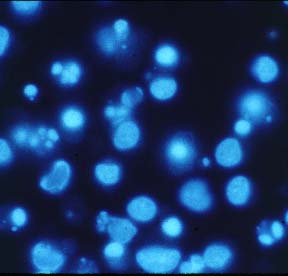 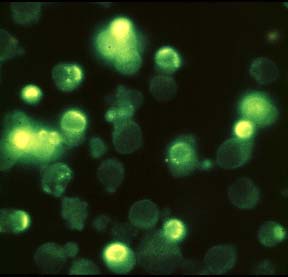 HL60 cells (human promyelocytic leukaemia) were induced to undergo apoptosis by treatment with etoposide (67 µM) for 3.5 h. Solvent controls were treated with DMSO (0.1%). After washing of the cells in serum-free medium and adhesion on poly-L-lysine-coated coverslips, cells were fixed in 10 % (w/v) trichloroacetic acid. Washing of the samples in an alcohol, incubation with 10H as first antibody (crude hybridoma supernatant) and with a FITC-conjugated second antibody and the respective washing steps were performed as described in Bürkle et al. (1993). Prior to mounting on slides, samples were incubated with DAPI for 10 min to counterstain cell nuclei. Apoptotic cells, which can be identified in the DAPI staining by chromatin condensation or nuclear fragmentation (1 cell in the control; many cells after etoposide treatment), display intense poly(ADP-ribose)-specific immunofluorescent signals while normal cells show a weak, nonspecific, cytoplasmic background staining. Note that poly(ADP-ribose) formation occuring as an immediate cellular reaction after treatment with oxidants, alkylating agents or ionising radiation is characterised by a fine-granular immunofluorescence pattern visible under high magnification (100x objective) (cf. Bürkle et al., 1993), whereas apoptosis-associated poly(ADP-ribose) formation mostly leads to a homogeneous staining pattern. Bürkle, A., Chen, G., Küpper, J.-H., Grube, K., Zeller, W.J. (1993) Increased poly(ADP-ribosyl)ation in intact cells by cisplatin treatment. Carcinogenesis (London), 14: 559-561. 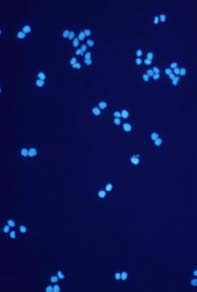 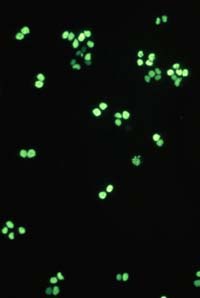 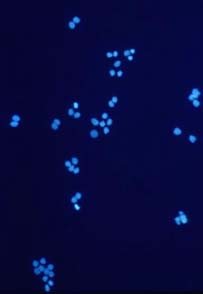 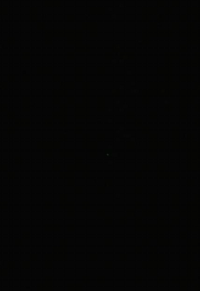 Cross the t's Nicola York | 26-Feb-2009 Tele-underwriting has been hailed as one of the successes in the protection industry in recent years but some advisers say different levels of service from different providers can be problematic. CBK Colchester principal Peter Chadborn says it can be difficult to manage client expectations of the underwriting process because they differ so much from