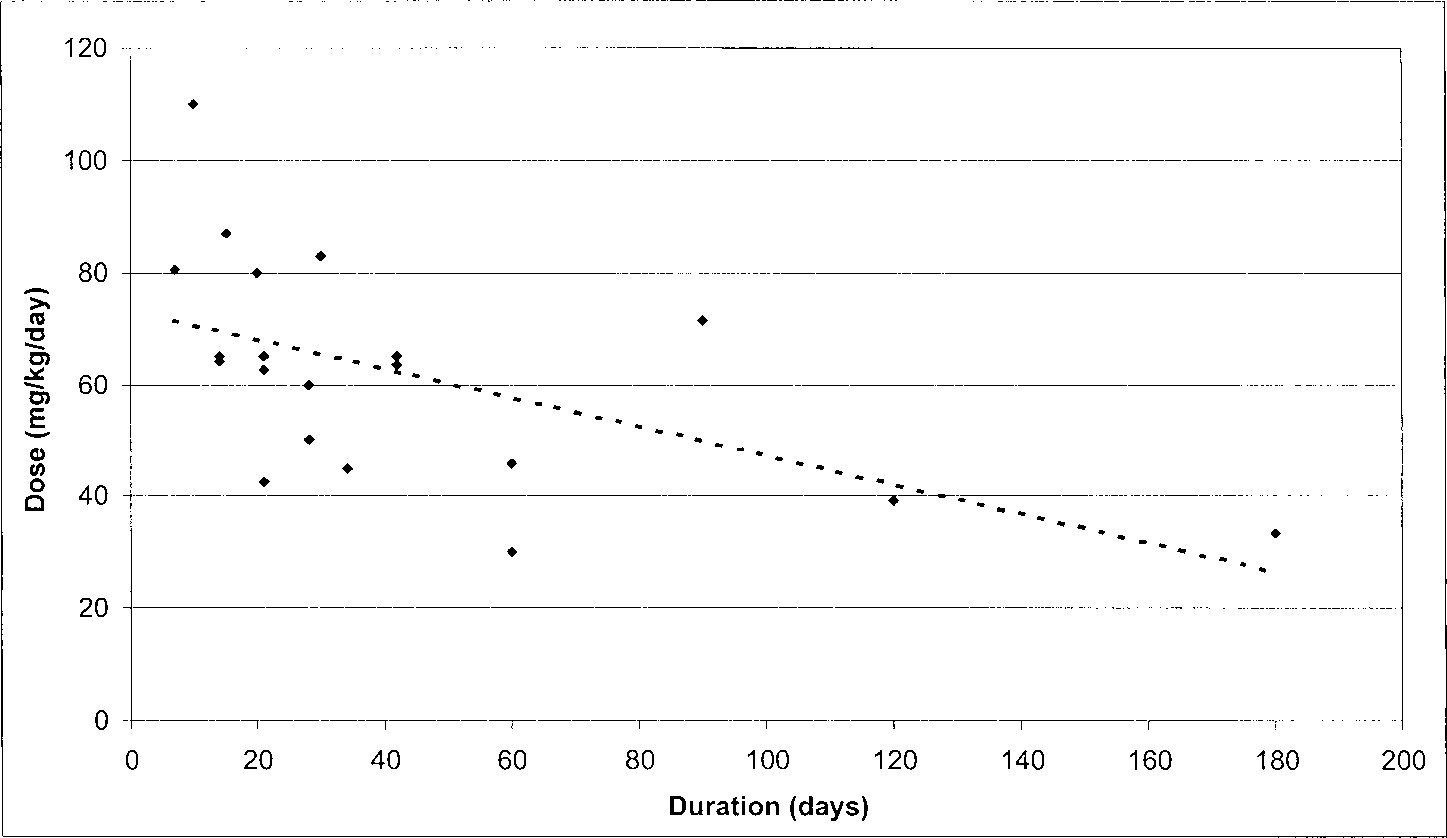 A scatterplot analysis of the doses and durations of metronidazole therapy for the dogs in this investigation. Higher dosages generally require shorter duration of administration to produce clinical signs of metronidazole toxicosis (r ϭ Ϫ.56). The data from dog 13 of the treatedgroup were omitted from this chart because the dog had been on metronidazole therapy for 1,099 days, which was, individually, markedly differentfrom the other dogs in this study.
zyme activities (2 of 21), for giardiasis (2 of 21), and for diazepam was 0.2–0.625 and 0.31–0.69 mg/kg, respective- dental disease (1 of 21). Before the diagnosis of metroni- dazole toxicosis, medical treatments for the neurologic Dogs treated with diazepam had an average response signs consisted of one or more of the following: corticoste- time of 13 hours and an average recovery time of 38.7 roids (16 of 21), antibiotics (8 of 21), methocarbamole (5 hours. The response times for dogs treated with diazepam of 21), carprofenf (3 of 21), meclizineg (2 of 21), and bu- ranged from 20 minutes to 24 hours, and the recovery times ranged from 24 to 72 hours. Dogs that were not treated Table 1 lists the summary statistics of dosages and du- with diazepam had an average response time of 4.25 days ration of metronidazole administration, dosages of IV and and an average recovery time of 11.6 days. Response times PO diazepam, if applicable, and response and recovery for the dogs in the untreated group ranged from 2 to 10 times for dogs in the untreated and treated groups.
days, and recovery times ranged from 5 to 21 days. Both The average daily dosage of metronidazole for dogs that the response and recovery times for the animals treated with received diazepam was 60.3 mg/kg/d; for dogs that were diazepam were significantly shorter than those for the un- not treated with diazepam, the average daily dosage of met- ronidazole was 65.1 mg/kg/d. The range of the individualdosages of metronidazole for dogs that were given diaze- Discussion
pam was 33–83 mg/kg/d. The range of the metronidazoledosages for dogs in the untreated group was 45–110 mg/ The neurologic adverse effects of metronidazole are well kg/d. The average daily dosage of metronidazole was not documented in humans1,7 and companion animals.8–11 There significantly different between the 2 groups (P Ͼ .05).
is currently no recommended treatment other than with- The average duration of metronidazole administration for drawing the drug and providing supportive care. Diazepam, dogs treated with diazepam was 127 days, with a range of a centrally acting benzodiazepine, is used in human medi- 7–1,099 days. The average duration of metronidazole ad- cine for symptomatic treatment of signs of vestibular sys- ministration was 37 days for animals in the untreated group, tem dysfunction,13–15,28,29 but reports have not indicated any with a range of 10–120 days. If the data from dog 13 of curative effect for an underlying disease or toxicity. In one the diazepam-treated group that had been on metronidazole study, guinea pigs undergoing unilateral labyrinthectomy therapy for 1,099 days are disregarded, the average duration and treated with diazepam had milder signs than the un- of metronidazole use for the diazepam-treated group be- treated group, but there was no marked difference between comes 44 days. The resulting calculation is closer to the the groups in the time to complete vestibular compensa- 37-day average of the untreated group; however, including tion.28 Similar findings regarding vestibular compensation the data from this dog does not alter the statistical analysis are reported in humans with BPV treated with diazepam.14,29 in comparing the 2 groups. The duration of metronidazole Diazepam has been recommended for alleviating signs of administration was not significantly different between the 2 vestibular dysfunction in humans and animals, but indica- tions for the use of diazepam other than for palliative ther- The average single, initial IV dosage of diazepam was 0.43 mg/kg, and the average subsequent PO dosage was The results of this investigation demonstrate that diaze- 0.43 mg/kg. The range for IV and PO administration of pam dramatically improves recovery times for dogs with 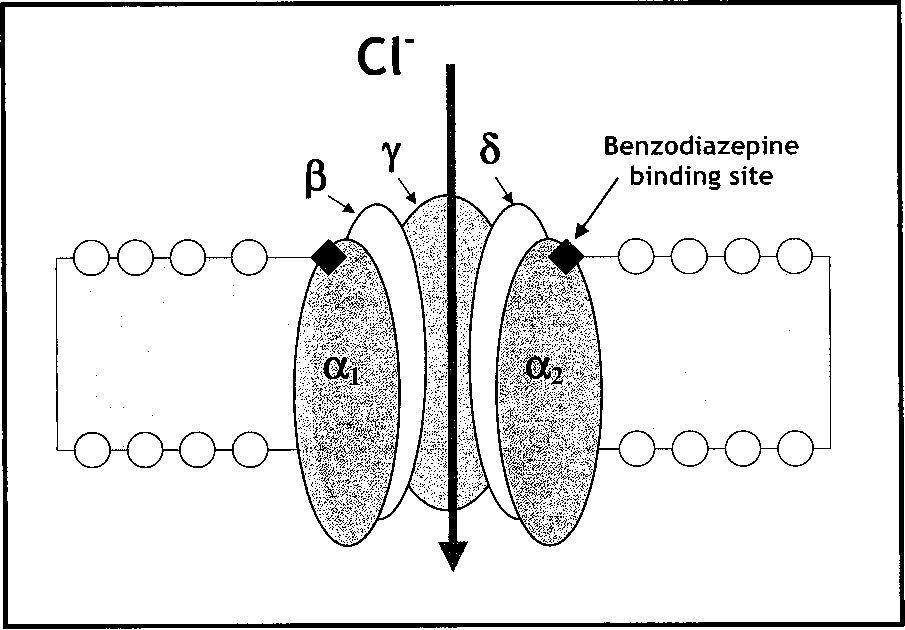 metronidazole toxicosis. Recovery times for dogs in thisstudy that did not receive diazepam were consistent withprevious reports. Dogs 1 and 3 in the untreated group hadprolonged recovery times, which greatly increased the av-erage overall recovery time for animals in this group. Bothof these dogs suffered pronounced paraparesis, which lin-gered long past the resolution of the acute vestibular signs.
Although these 2 dogs may have adversely influenced theaverage overall time to clinical resolution for the untreatedgroup, there still was a marked difference in the responseand recovery times compared to the diazepam-treated ani-mals if data from these 2 dogs are discarded.
The results of this investigation show a positive corre- lation between dosage and duration of treatment relative tothe time of onset of signs of metronidazole toxicosis (Fig Diagrammatic representation of a ␥-aminobutyric acid 1). There did not appear to be an increased susceptibility (GABA) receptor. The GABA receptor is a multisubunit ligand-gatedchloride (ClϪ) ion channel composed of to adverse effects of metronidazole administration on the increase in chloride conductance from the release of GABA from the basis of either age or breed. The average dosage of met- presynaptic membrane results in the inhibitory modulation of neural ronidazole that induced toxicity in the dogs of this study activity through membrane hyperpolarization.
(60.3 and 65.1 mg/kg/d for diazepam-treated and untreatedgroups, respectively) was consistent with published reports.
Ours was a retrospective study, and a specific protocol for the administration of diazepam was not used. All ani- facilitates inhibitory transmission in the cerebral cortex and mals in the diazepam-treated group, however, received an between the substantia nigra and caudate nucleus.27,34 initial, single IV bolus and then diazepam PO q8h for 3 Because of the prevalence of GABA-minergic receptors days. The average dosage of both the IV and PO diazepam in those tracts damaged by metronidazole and the knownrelationship of GABA receptors and benzodiazepines, the was 0.43 mg/kg, but there was no apparent correlation be- following mechanism may be postulated: benzodiazepines, tween the dosages of either the IV or PO routes and the such as diazepam, potentiate GABA influence on chloride conductance, thereby enhancing an inhibitory effect on ex- Neither the mechanism of metronidazole toxicity nor the citatory neurons.38–40 Conversely, inhibition of GABA re- precise mechanism of action of diazepam in the reversal of lease, such as seen in the neurological adverse effects of signs is known. Because the neurological effects of met- enrofloxacin,i ciprofloxacin,j and imipenem,k can lead to hy- ronidazole are referable to both cerebellar and central ves- perexcitability of the central nervous system, resulting in tibular dysfunction, literature regarding the histology and seizures or tremors.41,42 It may therefore be speculated that physiology of these systems was reviewed for a relationship interference of the GABA receptor at the postsynaptic membrane also may result in central nervous system hy- Histological examinations of brain tissue in dogs with metronidazole toxicosis have demonstrated Purkinje cell The benzodiazepines have specific binding sites on loss8,30 and axonal degeneration in vestibular tracts.8 His- GABA receptors within the brain, particularly in the cere- topathologic studies in mice given toxic dosages of met- bellum, cerebral cortex, and limbic system.41,43 The imida- ronidazole showed cerebellar Purkinje cell loss and degen- zobenzodiazepine flumazenil is a selective, competitive an- erative changes in the vestibular, cochlear, deep cerebellar, tagonist (also known as an inverse agonist) of the benzo- and olivary nuclei as well as in the rostral colliculi.31 These diazepine receptor.40,41,44–47 Both flumazenil and metronida- nuclei and their associated tracts are involved primarily zole have an imidazole component, and it is possible that with equilibrium, hearing, and fine motor control.32,33 These metronidazole also may bind specifically to benzodiazepine nuclei, particularly the Purkinje cells, mediate an inhibitory sites on GABA receptors in the cerebellar and central ves- influence on postsynaptic receptors,34,35 and their principal tibular systems, resulting in loss of inhibition, similar in neurotransmitter is GABA,25,26,34 which is the major inhib- effect to flumazenil (Fig 3). That the adverse reactions of itory neurotransmitter of the central nervous system.25–27,36 flumazenil in humans, such as seizures, vertigo, and atax- Activation of the GABA receptor by GABA or GABA mi- ia,45–47 are similar to the neurological adverse effects of metics, such as benzodiazepines, increases chloride (ClϪ) metronidazole in dogs lends additional credence to this pro- conductance at the postsynaptic membrane, resulting in hy- posed mechanism of metronidazole toxicity. Regardless of perpolarization (Fig 2).37 The majority of GABA-minergic whether metronidazole specifically binds to the benzodi- receptors in the central nervous system are located between azepine receptor inhibiting the effects of GABA or selec- the neurons of the cerebellum and their associated brain- tively destroys these cells by another mechanism, it is the stem nuclei, especially the Purkinje cells and the lateral GABA-dependent interactions of the cerebellar and central vestibular nuclei. Other major sites of GABA receptors are vestibular systems that are affected. It can be therefore pos- in the tracts between the vestibular nuclei and the trochlear tulated that diazepam either competes with metronidazole motor neurons and within the olfactory bulbs, cuneate nu- for the benzodiazepine receptor site or supplements GABA clei, hippocampus, and lateral septal nuclei.27 GABA also propagation via unaffected receptors, whereas the remain- 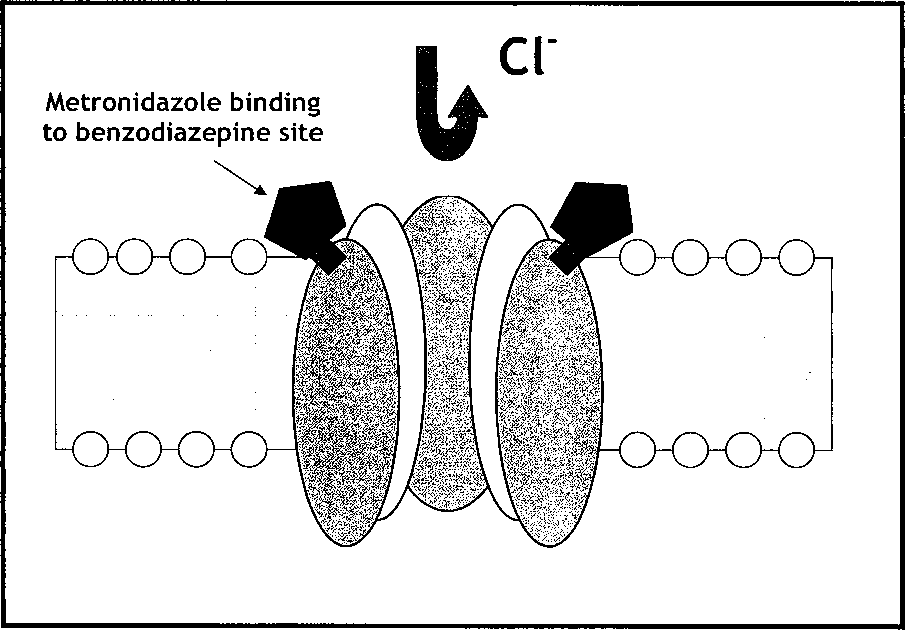 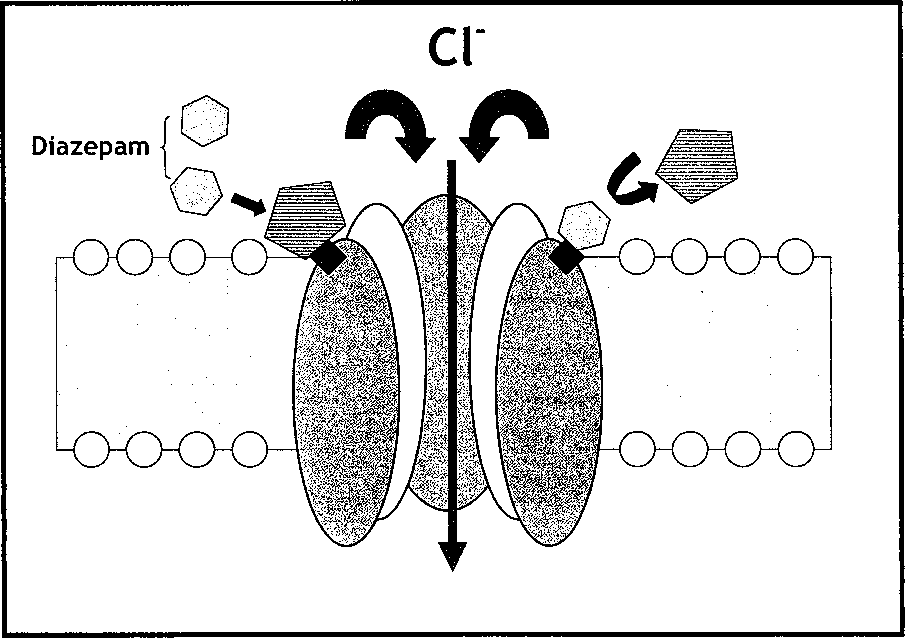 INFORMED CONSENT DOCUMENT FOR TREATMENTS WITH MACROLANE™ VRF20 AND MACROLANE™ VRF30FIRST AND SURNAME OF THE PATIENT’S LEGAL REPRESENTATIVE LEGAL REPRESENTATIVE, RELATIVE, LEGAL GUARDIAN) I STATE THAT NAME OF THE DOCTOR WHO GIVES THE INFORMATIONN° OF MEMBER OF THE PROFESSIONAL BODY (IF APPLICABLE) has explained to me that in my situation it is advised that I be treated with Macrolan