Cystinosis and its treatment

ARTICLES
CYSTINOSIS AND ITS TREATMENT
By D. Cairns, PhD, MRPharmS, R. J. Anderson, PhD, MRSC,
M. Coulthard, MB ChB, and J. Terry
Cystinosis is a rare inherited disease with an incidence, in developed countries, of about one case in every 200,000 live births. In the past, it was rare for cystinosis sufferers to survive into adulthood. The disease occurs when the mechanism that removes excess cystine breaks down. Cystine then accumulates within body cells preventing these cells from functioning correctly. This initially leads to kidney problems and progresses to other parts of the body, including the thyroid gland, eyes and liver. Impaired growth is yet another symptom of the condition. In this article, the condition and its Nephropathic cystinosis is a rare The disease is caused by a defect in the cystinosis, or may be unrelated to the condi- lysosomal transport mechanism for cystine tion. The daily drug regimen of a typical cystinotic patient is presented in Panel 3.
This patient is post-transplant and is receiv- 115,000 and one in 179,000 live births.1,2 ing, in addition to cysteamine and carnitine, There are approximately 200 patients in the the cystine transport protein, cystinosin.5,6 A number of mutations have been described, itself in raised intracellular levels of the as well as a major deletion present in about The main drug treatment for cystinosis is essential amino acid cystine to 50 to 100 50 per cent of cystinosis patients of Western administration of the aminothiol, cysteamine times normal levels. Crystals of cystine are European ancestry (although cystinosis has (mercaptamine, as the bitartrate salt, Cysta- been described in all major ethnic groups).
rates, leukocytes, cornea and conjunctiva.
The disease is characterised by poor growth, cysteamine-cysteine mixed disulphide within URRENT TREATMENT
cells, which is structurally similar to the amino proximal tubule function), renal glomerular Treatment of cystinosis involves administra- acid lysine and can egress the lysosome using failure and involvement of other tissues and tion of glucose and electrolytes to reverse the pathway for lysine excretion (Figure 1).12 the effects of Fanconi syndrome, as well as Cystinosis is fatal if not treated and death corneal and renal transplant. Indomethacin occurs in the second decade of life. Treat- is administered for its sodium, potassium molecule possesses an offensive taste and ment begun just after birth can attenuate the smell and irritates the gastrointestinal tract, rate of renal failure. However glomerular patients, carnitine is used to combat the effects of muscle weakness brought about by administration. In addition, cysteamine is (approximately one year) is irreversible and urinary loss of free carnitine and subsequent excreted in breath and sweat, which leads to may result in the need for renal transplant.
reduction in the transport of fatty acids into The condition has been recently reviewed.3,4 effects, such as neutropenia. As a result of growth in short children with chronic renal these problems, patient compliance is poor.
Panel 1. Symptoms of
FUTURE TREATMENTS
cystinosis
a cystinosis patient is often considerable, especially when serious medical conditions amine, two recent projects have been estab- such as epilepsy or diabetes, are present.
lished at the University of Sunderland. A into a sustained release form.13 This, it is hoped, will minimise the gastric irritation Panel 2. Treatments
experienced by patients taking large oral for cystinosis
Dr Cairns and Dr Anderson are senior lecturers in the Institute of Pharmacy, Chemistry and Biomedical Sciences, University of Sunderland. Dr Coulthard is a paediatric nephrologist, Royal Victoria Infirmary, Newcastle-upon-Tyne, and Mr Terry is founder and adviser, Cystinosis Foundation UK. Correspondence to Dr Cairns (e-mail [email protected]) 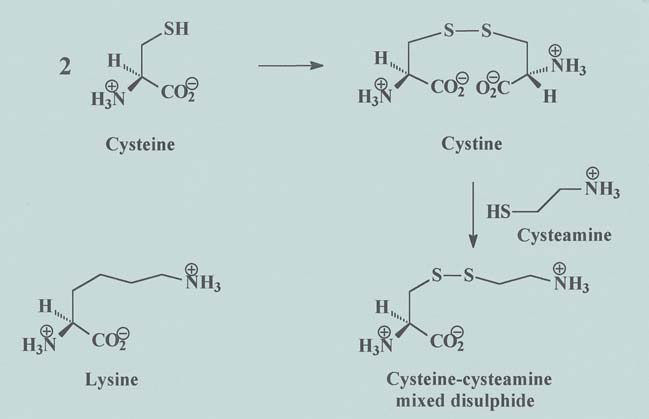 • International Prostate Symptom Score over the age of 50 is an enlarged prostate. (IPSS) or AUA Symptom Index — a short this problem. By age 85, the number climbsor enlarged prostate and how often theyoccur. Due to the prostate’s location, benignenlargement may result in obstruction of • Urinalysis — a laboratory test of your urine performed to rule out the presence pro