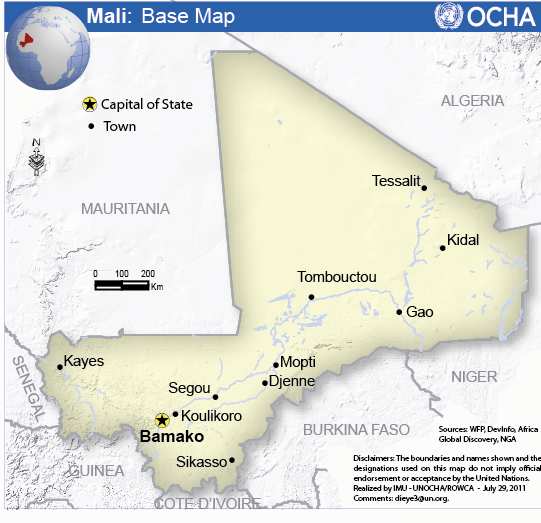 This report is produced by the OCHA Regional Office for West and Central Africa in Dakar in
collaboration with humanitarian partners and is issued by OCHA Headquarters in New York. It
covers the period from 27 June to 10 July 2012. The next report will be issued on or around 25
July.

I. HIGHLIGHTS/KEY PRIORITIES
• Violent confrontations between the MNLA and MUJAO Islamists in the town of Gao on 26 and 27
June left at least 35 persons dead and 41 persons injured.
• The total number of internally displaced persons (IDPs) within Mali is estimated at 155,042. The
number of Malian refugees registered in Burkina Faso, Mauritania and Niger is now at 202,684
individuals.
• 47 cholera cases were reported in Wabaria district, located on the Niger River bank near Gao but the
situation appears now under control.
• As of 10 July donors had committed US$ 88.5 million, or 41.6 per cent of total requirements.
II. Situation Overview

Recent political developments
The situation in northern Mali
remains volatile. Precarious calm
reigned over Gao after Islamists took
control of the town in violent
confrontations with MNLA on 26 and
27 June. 35 persons, including
civilians, were killed and over 40
injured during the combats.
In an attempt to prevent a counter
attack by Touareg rebels, the
Islamist fighters allegedly planted
anti-personnel mines around the
town of Gao, according to media.
On 2 July, Ansar Dine destroyed
several ancient Muslim shrines in
the northern city of Timbuktu, after
UNESCO declared it a World
heritage site in danger. The act was
condemned by governments around
the world.
In a 3 July resolution, the United
Nations Security Council demanded
the immediate and unconditional cessation of hostilities by rebel groups in the country’s north.
The Security Council also expressed serious concern about the rapidly deteriorating humanitarian
situation.

Humanitarian Overview
The estimated number of IDPs is 155,042 across the country (Protection Cluster, 29 June). The figure
includes 48,042 registered individuals in the south with 1,234 new displaced recorded in Sikasso and
5,049 departures from Mopti

Burkina Faso
As of 4 July the number of Malian refugees registered in Burkina Faso stood at 65,009. There are five
official sites: Fererio (Capacity 25,000 persons), Gandafobou (10,000), Goudebo (5,000) in Oudalam
The mission of the United Nations Office for the Coordination of Humanitarian Affairs (OCHA) is to mobilize and coordinate effective and principled humanitarian action in partnership with national and international actors. http://ochaonline.un.org OCHA Situation Report – Mali Complex Emergency region, and Mentao (capacity 15,000) and Damba (10,000) in Soum region. These official figures haven’t
been updated since 9 June for Oudalam and mid-May for other areas.
Agriculture: FAO continues its support to vulnerable refugees’ and host communities’ households; by 30
June, some 665 tons of certified seeds and 335 tons of fertilizers were provided. FAO also provided
about 2,500 tons of animal feed and 14 tons of fodder seeds, as well as veterinary products for more
than 5,000 vulnerable households, including Malian refugees.
Food: food distribution took place in the different sites of Mentao camp for 3,610 refugees in the North,
5,891 in the South and 2,677 in the Centre. In July, CRS will distribute food to refugees in Ferrerio.
Shelter and NFI: 500 tents were distributed to the same number of families in North Mentao mid-June.
General NFI distribution is planned for early July. UNHCR has prepositioned NFIs in Ferrerio.
Wash: The water and sanitation situation in Burkina Faso remains critical and require more funding. With
the arrival of the rainy season this is a major concern. As of 30 June, refugees in Ferrerio site continue to
receive water equivalent of 7lts/person/day. Refugees in Mentao site receive approximately
12lts/person/day, and those in Damba receive 14lts/pers./day. Important gaps also exist in latrines and
showers. Only 14% of the latrines correspond to the emergency standard of 50 persons per latrine in
Ferrerio. The standards have been reached in Mentao and Damba. Hygiene promotion activities are on-
going.
Education: Agreements on education are being finalized between UNHCR, UNICEF, Save the Children
and Terre des Hommes. Child-friendly places and schools in Ferrerio, Mentao and Gandafabou will be
established. The child protection cluster has obtained permission to use the Malian educational
curriculum.
Protection: A protection training plan has been elaborated for junior UNHCR protection staff, as well as
governmental and non-governmental partners for all refugee sites. UNHCR will deliver the training in
conjunction with UNICEF. It will start the week of 9 July.
Mauritania
Refugees: As of 4 July, a total of 89,390 Malian refugees had been registered in Mauritania during the
last two weeks, with an increase of 15,000 persons. Interviews will be conducted to better understand the
trends behind the new influx. UNHCR has started the elaboration of a plan to establish a second camp in
conjunction with UNICEF and the local authorities. The majority of the Malian refugees in Mauritania are
from the region of Timbuktu 87%, others are from the regions of Mopti 8% and Segou 5%. 62% of
refuges are 17 years old or younger, 35% are between the ages of 18 to 59, and 3% are older. 54% per
cent are female and 90% are of Touareg origins. The remainder 10% is of Berber origin.

Health: The measles vaccination campaign continues in Fassala for refugees who just arrived, prior to
their transfer to Mbera camp. All health actors are now involved in the development of a weekly health
data collection system.
WASH: Solidarités International evaluation results on the water consumption in Mbera camp showed that
refugees receive a minimum of 9.6 litres of clean water per day. As of June 24, 1,201 communal latrines
have been installed by UNHCR, Solidarités international and OXFAM in Mbera camp. The construction
of a third borehole was completed during the last week of June. Pumping tests are currently being done.
The rehabilitation of three water basins for livestock has also started.
Education: The registration of children of school age continues. As of 1 July 3,637 of refugee children
have been enrolled in the four primary schools established in the camp. An educational solution needs to
The mission of the United Nations Office for the Coordination of Humanitarian Affairs (OCHA) is to mobilize and coordinate effective and principled humanitarian action in partnership with national and international actors. http://ochaonline.un.org OCHA Situation Report – Mali Complex Emergency be found for 80% of children of primary school age who remain without access to school. Funding is
sought to provide education to these children.

Niger
As of 4 July, 48,285 registered Malian refugees were living in Niger, with an increase of over 6,000
persons since the last reporting period. This is in addition to the 2,528 Nigeriens had returned from Mali
The relocation process of refugees from the five spontaneous sites of MBeidou, Tinfagate, Tidirgalene,
Gadouel and Intadabdab, close to border areas in the Ayorou region, which started at the end of May,
was successfully completed.
Food: From 21-30 June, the Niger Red Cross carried out a fourth round of WFP-supplied food
distribution in Tillia. Around 199,000 MT of cereals, including rice, beans and cooking oil was distributed
to 2,269 families comprising 12,570 persons. Each family received a ration of 12 kg of rice, 3kg of beans
and 0.75l of cooking oil.
Nutrition: Plan Niger continues to provide support through nutritional programmes, attending pregnant
and lactating women, as well as severely and moderate malnourished children.

Health: Four cases of Cholera have been confirmed in Tabareybary camp since last week. MSF Swiss is
supporting the Ministry of Health in the case management of the cholera and on a sensitization
campaign. There are two cholera treatment centres with more than 100 beds capacity in total. In
Mangaize camp, MSF Swiss recently completed a vaccination campaign targeting women and young
girls. The vaccines administrated included measles and tetanus as well as vitamin A, Albendazole and
Pentavalent.
WASH: Since 15 June a new borehole is functioning in Abala camp. UNHCR and partners have
succeeded in bridging the gap in daily water allowance for refugees in Mangaize camp. However,
refugees in Abala, Ayorou and Tilia are still living with approximately 13 litres per day or less. The
situation of latrines and showers is also improving, although important gaps remain in all camps. At the
new Tabareybarey camp, efforts are being made to consolidate the water supply system. 60,000 litres
are being provided by water trucking by Plan Niger. Ten blocks of latrines are operational. Additional
work is on-going despite constraints related to the start of the rainy season.
Shelter and NFI: 500 NFI kits to 400 refugees and 100 beneficiaries from the host community have been
distributed by World Vision. Plastic sheeting was also distributed to 800 families in camps by partner
Islamic Relief.
For more information please visit http://data.unhcr.org/MaliSituation/regional.php
V. Coordination

OCHA conducted a sensitization session for 60 doctors from the Ordre des Medecins du Mali on
humanitarian principles and partnerships, ahead of their deployment to support health activities in Gao,
Kidal and Timbuktu.
A global website was created by OCHA (http://mali.humanitarianresponse.info).
VI. Funding
On 9 July the Financial Tracking Service (FTS) reported that donors had contributed $ 88 million for the Mali humanitarian response. This corresponds to 41.6 per cent of the $213 million required.
UNHCR reported that as of 4 July, donor pledges amounted to only $ 34.2 million, equivalent to 22.7% of
the total $153.7 million required for the refugee response.


The mission of the United Nations Office for the Coordination of Humanitarian Affairs (OCHA) is to mobilize and coordinate effective and principled humanitarian action in partnership with national and international actors. http://ochaonline.un.org OCHA Situation Report – Mali Complex Emergency VII. Contact