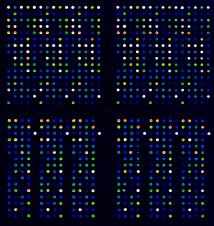 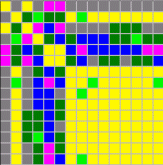 Individual risk assessment:
The use of toxicogenomics to predict adverse drug responses
E. Jongedijk(a), R. Neft(b), K. Schmeiser(a), P. Alen(a) and S. Farr (b)
(a) Phase-1 BioResearch, Technologiepark 4, 9052 Zwijnaarde (Gent), Belgium
(b) Phase-1 Molecular Toxicology, 2904 Rodeo Park Drive East, Santa Fe (NM) 87505, USA
Introduction
It has long been known that people, when given the same therapeutic drug, can react quite differently. Phase-1 has developed a technology to identify, in
advance, which patient will develop an adverse drug reaction (ADR). This knowledge will not only be beneficial to the sub-population of patients with
certain ADRs but will also help to keep good drugs on the market and reduce the liability for drug manufacturers.
Phase-1’s approach to determine gene expression profiles predictive of ADR involves three steps. Firstly, using transcriptome fingerprinting , all
differentially expressed genes indicative for the treatment are identified. This open-ended technique is based on mRNA differential display. The second step
is to use a higher throughput technique, such as microarrays, to screen a population of sensitive and non-sensitive individuals using the identified gene set.
Finally; the third step is to move the predictive genes only to a clinical-applicable platform, such as RT-PCR based “Risk Cards”, co-developed with Applied
Biosystems.
Experimental design
Figure 1: Culturing cells for transcriptome fingerprinting.
To perform a proof-of-principle study the well-characterized drug
Lymphocytes from 3 penicillin sensitive and 3 penicillin non-sensitive individuals were treated with penicillin before isolating the RNA for transcriptome fingerprinting.
penicillin. The incidence of penicillin sensitivity is estimated to be as
high as 10% in the general population and the adverse reactions to
penicillin range from mild skin rashes to severe exfoliative dermatitis.
Cultured lymphocytes in the
presence of PHA for 24 hours
Because white blood cells, the target cells for allergies, are easily
Whole blood
Isolated
lymphocytes
accessed and because many penicillin sensitive people are available in
the general population, this is an excellent candidate for a gene
Transcriptome
Fingerprinting
expression study.
Wash cells with PBS and culture for
additional 24 hours without PHA
1) Transcriptome fingerprinting
An open-ended technique, termed transcriptome fingerprinting, has
Untreated
been used to identify all differentially expressed genes in lymphocytes
RNA isolation
Divide cells equally and stimulate
with penicillin for 24 hrs
following Penicillin G treatment. Lymphocytes from sensitive and non-
sensitive individuals were cultured in vitro and treated with penicillin G.
1 2 3 4 1 2 3 4 1 2 3 4 1 2 3 4
Untreated cells from each individual were used as negative controls. The
1 2 3 41 2 3 4 1 2 3 4 1 2 3 4
total RNA was isolated from treated and untreated lymphocytes and
Figure 2: Transcriptome fingerprinting in lymphocytes from two
individuals.
applied to transcriptome profiling (Figure 1). 30 arbitrary primers were
Each group of four lanes represents a single primer combination. The gel shows used to perform 90 reactions, covering approximately 71% of the total
samples using untreated (lanes 1 and 3) and treated (lanes 2 and 4) lymphocytes transcriptome (Figure 2).
from penicillin sensitive (lanes 1 and 2) and non-sensitive (lanes 3 and 4) individuals. The red arrows point at differentially expressed genes indicating a 2) Microarrays
response in the penicillin sensitive individual (up-regulation after the treatment), whereas the green arrow points at an up-regulated gene indicating a response in Once all differentially expressed gene between sensitive and non-
the non-sensitive person only. The blue arrow highlights a basal difference sensitive peoples were identified they were excised from the gel,
amplified, cloned, sequenced and used as targets on a customized
microarray.
RNA samples provided from 8 sensitive and 8 non-sensitive individuals
Figure 3: Transfer of the marker genes from the
were processed using the customized microarray. Gene expression
customized microarray (a) onto a high-throughput
profiles from the two populations were analyzed to select a small
platform (b).
number of “discriminator genes” that were most differentially expressed
Independent-samples T-tests were performed to suggest between sensitive and non-sensitive people (Figure 3).
which genes discriminate best between the sensitive and non-sensitive people. Twenty-one genes (p ≤ 0.005) were identified and transferred onto a clinically available 3) Risk-card
platform (TaqMan technology based risk-cards). The “discriminator genes” were moved onto 96-well format ‘Risk-Cards’,
allowing a fast, sensitive and semi-quantitative parallel measurement of
the 21 genes in quadruplicate. As little as 60-800ng of RNA is required
Figure 4: Correlation matrix using Phase1’s
for this card-based assay allowing the use of small blood or biopsy
Non-sensitive Sensitive
1 2 3 4 5 6 1 2 3 4 5 6 7 8 9
software.
samples.
Non-sensitive
The 21 identified “discriminator” genes were used to Non-sensitive
It has been verified that both platforms, single-stranded cDNA
Non-sensitive
calculate a correlation matrix. Bright colors indicate a high Non-sensitive
microarrays (using Phase-1’s technology) and risk-cards (using the
Non-sensitive
correlation between individuals whereas dark colors Non-sensitive
Sensitive
indicate low correlation between individuals. It is TaqMan technology), result in the same gene expression profile (data
Sensitive
Sensitive
interesting to note that sensitive individuals more highly not shown).
Sensitive
Sensitive
resemble each other (red box). The non-sensitive Sensitive
Sensitive
individual #2, however, continues to resemble the Sensitive
Sensitive
sensitive individuals indicating a sensitivity to penicillin, which was confirmed by an allergist. Conclusions
The combination of the three steps described above allows the identification and validation of gene patterns predicting individuals at risk
for developing adverse drug hypersensitivity. Both, patients and healthcare industry, can benefit from this powerful genomic tool.
Potential compounds for the application of Phase-1’s individual risk assessment are drugs that a) have been withdrawn from the
market, b) that are restricted in use or c) that require frequent patient monitoring because of adverse responses in a subset of the
population.

P H A R M A N E X ® P R O D U C T I N F O R M AT I O N PA G E PROMOTES HEALTHY ENERGY LEVELS* Positioning Statement Who Should Use This Product? The herbs in Energy Formula work together to provide optimal syn-Energy Formula is designed for people suffering from occasional fa-ergism and support the body's ability to reduce mental fatigue andtigue. This product offers an immediate, but