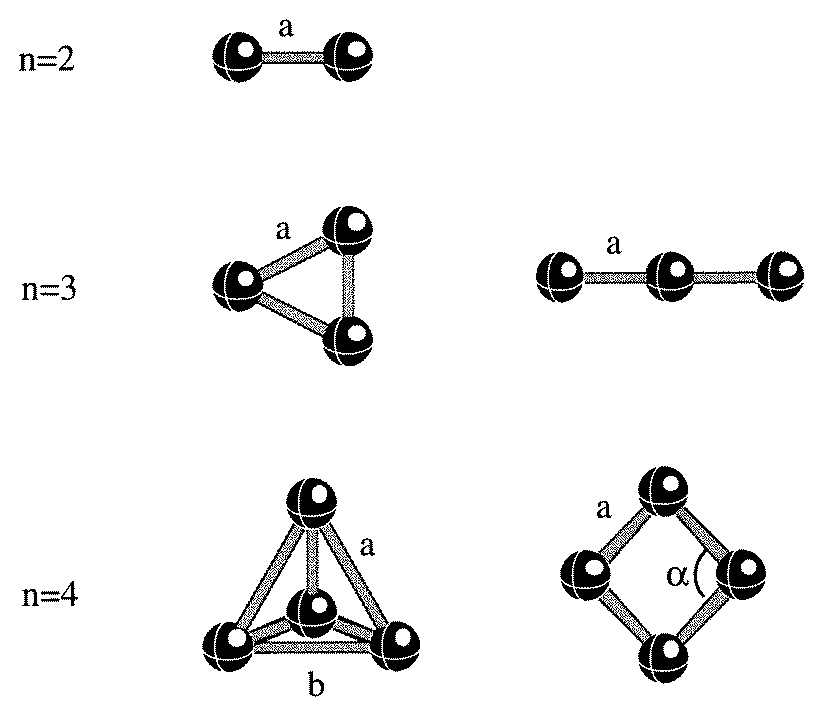 Magnetism of free and supported vanadium clusters Figure 1. Equilibrium geometries of free Vn clusters. The geometrical parameters are given in
table 1.
A. We should note that LSDA tends to overestimate the binding energy while the bond length is less sensitive. For example, we obtain a bindingenergy of 5.52 eV and a bond length of 1.71 ˚ give the ground state of V2 to be a triplet. There have been a number of earlier theoreticalworks [29] on V2 ranging from extended H¨uckel to local spin density calculations, whichyield the ground state of V2 to be 9 − or 1 +. However, our result of spin triplet as the ground state of V2 agrees with recent experiment [28] and theory [3, 30].
The geometries of the Vn clusters are given in figure 1. The bond lengths, binding energies, and the magnetic moments per atom are given in table 1. Note that, as in V2, thebinding energy per atom in the local spin density approximation is consistently higher thanthat using the gradient correction. However, the bond lengths, bond angles and the magneticmoment per atom remain practically unaffected. It is also interesting to note that the bindingenergy of 1.47 eV/atom and bond length of 1.73 ˚ than the corresponding values for bulk vanadium, which has a cohesive energy of 5.31 eVand a nearest neighbour distance of 2.62 ˚ A. The magnetic moment per atom of the dimer is 1.0 µB and is significantly reduced from the gradient corrected free atom value of 3.0 µB .
To aid in the discussion to follow, we have calculated the binding energy of a V2 dimer as a function of interatomic distance for different spin multiplicities, such as triplet, quintet,septet, etc. It is expected that as the interatomic separation of the V2 dimer is increased,the overlap between the orbitals centred at each atomic site should decrease. This in turnshould cause the magnetic moment per atom to increase. To examine how this processevolves, we plot the binding energy (calculated using the GGA) of the dimer in figure 2 forvarious spin multiplicities. Note that when the interatomic separation reaches about 1.9 ˚ the ground state changes from a triplet to quintet. At an interatomic distance of about 2.2 ˚ the states with spin multiplicities of 5 and 7 are nearly degenerate. Beyond this distance thepreferred spin multiplicity is 7. Thus, as V clusters are deposited on a metallic substrate,their interaction with the substrate atoms will cause the V–V distance to conform to thedistance in the underlying lattice. Consequently, this factor alone can cause their magneticmoment to differ from the free cluster value.
For example, when we confine the V2 dimer to a distance of 2.56 ˚ 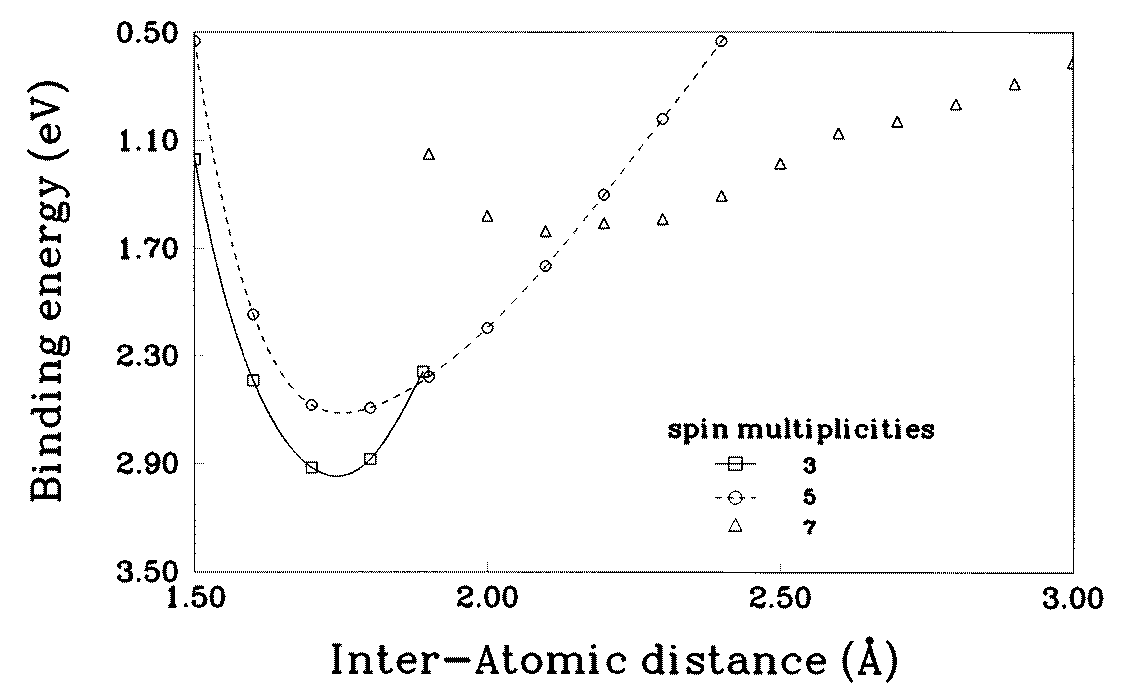